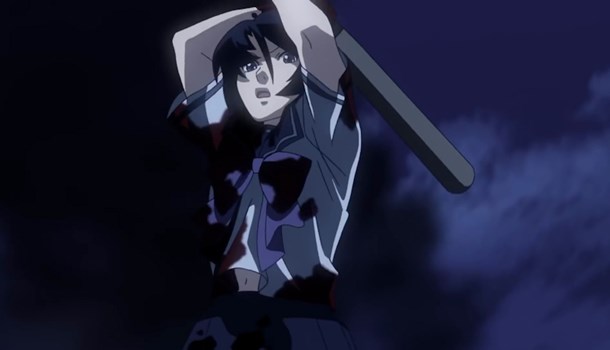 Calamity of a Zombie Girl

Zombies are one of the most popular types of “monster” in modern society. There are numerous iterations all with slight variations on the typical tropes, and as such it is always interesting to see what a new piece of zombie fiction can bring to the table.

In this instance whilst this film involves the walking undead it is certainly doesn't (by western standards) involve what you would immediately consider to be zombies. To give some context, Calamity of a Zombie Girl was originally a light novel series published in 2012 by Ryō Ikehata. It started as two volumes with a further pair arriving later that year as a sequel to the original story. It gained sufficient interest that an anime adaptation was announced around the same time, but things went quiet shortly after.

It wasn't until early 2018 that the project was resurrected and re-announced as a feature film spanning 79 minutes produced collaboratively by the popular Gonzo Studio, and the lesser known Stingray.

Our story begins late at night, at an eerie looking building we later discover to be Sankan university. A group of 5 teenage student are trying to break in, not for test paper answers or for setting up pranks, but because they believe there is treasure to be found. It isn't immediately clear what the nature of this treasure is, but they discover a pair of coffins within which are two mummified young women. Their origins are unclear from their attire and our group of adventurers find nothing to provide any clues. A quick search yields a stone, which is pocketed and removed as the students leave the scene, shortly afterwards, both embalmed women return to life.

The resurrected pair frantically search for the stone, and we learn that the women are Lady Euphrosyne and her young aide Alma. An inquisitive janitor meets a swift demise at the hands of Euphrosyne as she simply swipes him into a wall and ends his life on impact.

The Lady and her aide search for the stone, and it's not long before they encounter the students, who foolishly refuse to relinquish the stolen stone and subsequently try to survive the ensuing slaughter - in short, the plot is resembles the style of a classic 80's B-movie horror flick.

As a genre movie, slasher horror flicks don't suit all pallets, but they can still be fun romps. What makes or breaks this genre is the quality of the characters, and here we have a mixed bunch with none of them being overly likeable. It is unclear as to whether that was intentional or not, and I suppose it's easier to watch teenagers get murdered if they aren't all that interesting to begin with.

The two characters who lead this student gang are Abe, a tall, attractive kid with messy hair and a goatee, and his friend Azuma. Abe's peers refer to him as arrogant and conceited, though that's not entirely apparent in his actions - he does at one point  uncomfortably force his attentions on one of the ladies of the group who never shows any interest in him, but that's as sleazy as it gets.

Azuma has brown hair and glasses with a slightly fuller figure. By his reference to gadgets you get the idea he is the geek of the group, and it's Azuma who gets them into the University (though he has little interest in finding anything). When confronted by Lady Euphrosyne he spins on a dime, first denying breaking in and then confessing to everything. He's clearly happy to throw his com-padres under a proverbial bus.

The three girls in our occult group are less well defined; Sayaka is a tall attractive brunette who has a low cut top and mini skirt. Sayaka has a love interest in a professor who is on campus. It becomes clear that this love interest drives a lot of her motivations though that's as far as her personality gets developed. Yui is a spunky Kung Fu enthusiast and is apparently incredibly good at the art despite learning from books. As perhaps the most likeable character I wanted to learn more about her, but it simply doesn't happen. Finally we have Noriko, who has little of interest to note, and her ultimate fate seems to be down to circumstance more than any personal skills or abilities.

To round out the cast, we have the youthful Professor Takanashi, who Sayaka is interested in, and his younger sister Mako who is visiting her brother. From early on we pick up that he has some involvement with the break in, exhibiting some dark and sadistic tendencies - his motivations when revealed are not wildly unexpected.

All of these characters are easily forgotten, but at least we get more from our “zombies” who are perhaps more appropriately referred to as mummies for most of the film. When introduced, Euphrosyne is playful and even funny. There are a few genuinely amusing body humour scenes such as losing her head in a basketball hoop and her body departing with it in haste to find some way to reattach it. Sadly this personality is often lost, as more time is spent with her as a killing machine who has no qualms with dispensing with the people who get in her way.

Alma is a cute younger blonde who clearly adores her master. They have fantastic chemistry and it would have been nice to have more time spent developing this dynamic with more humour, but time doesn't allow for this either.

The music is passable. It provides suitable atmosphere, though often reminded me of old horror game soundtracks for games like Clock Tower. The animation was fine, though not mind blowing. Annoyingly scenes throughout the film would end suddenly with a swift fade to black, and became so repetitive that it became almost jarring. In keeping with B-movie horror there was ample blood and gore, and it should be noted that there was a fair bit of nudity too, though this did not seem out of place or a detracting factor. Blood, brains and body parts (and occasional boobs) are often seen on screen. It makes sense for the genre though does almost become passe.

What is strange though is how from early on the characters themselves act oddly. Having had an arm removed you’d expect a character to scream or go into shock. Instead they just got up and ran unfazed by the whole event. Equally when someone saw the one armed man kneeling and calling for help, rather than going to investigate they stay on the phone commenting about what a jerk he is.

All in, I felt this film was very much a curates egg. There were lots of things I found forgettable, in particular the majority of the cast. They weren't characters I would care to see more of (not a problem given how many of them perish). The real stars, Euphrosyne and Alma, were never given enough time to develop, though if given the space then the fun dynamic and humorous nature of the pair would be worth watching.

Perhaps if the adaptation had opted for a series there would have been more room for the characters to grow. As it is I would say it was watchable fare that will soon be forgotten. If you are after zombies and blood I would suggest High School of the Dead or Tokyo Ghoul to sate your lust for violence!

6
A bombastic but largely forgettable B movie in the literal sense - blood, brains, bodies and boobs.
LATEST REVIEWS