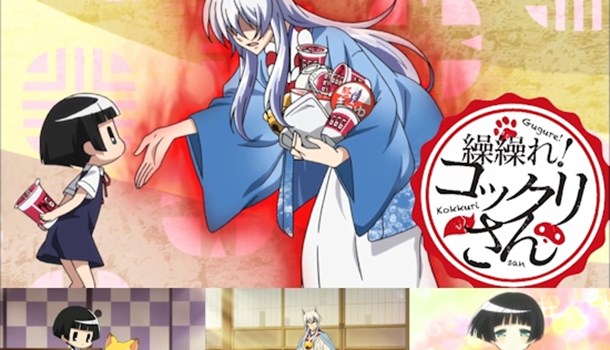 At the beginning of every anime season there’s the big task of filtering out all the series that aren’t worth watching from the real gems. Sometimes it can be obvious which ones are going to be the keepers, while at others it may be the series you least expect. The comedies are often the ones especially hard to pick out, so what is there to make Gugure! Kokkuri-san a keeper? A little girl, animal spirits and a whole lot of strangeness.

Kokkuri is a Japanese divination game where an animal spirit is summoned to answer questions on a piece of paper through moving a coin that the player’s index finger is touching (think a ouija board with fluffier paranoramal activity), but with the one rule that this “game” shouldn’t be played alone. So when the expressionless schoolgirl Kohina Ichimatsu decides to break this taboo, it’s no surprise that she ends up being haunted by the fox spirit Kokkuri.

However when Kokkuri takes one look at Kohina, a self-proclaimed doll who has a rather unhealthy obsession with instant noodles, he takes it on himself to become her guardian and raise her to become a “real girl”. Cue all kinds of supernatural hi-jinks, as Kohina soon has a whole host of animal spirits taking up permanent residence at her home.

Comedy anime can be a particularly divisive genre simply due to how humour can vary among audiences, and that’s even without taking into account how well some jokes will resonate with an English speaking audience. However it’s refreshing to say that Gugure! Kokkuri-san is a show that any viewer should be able to pick up without hesitation. Outside of the animal spirit mythology element (which is properly explained as each new spirit shows up) the story and jokes are easy to follow, flitting aimlessly between simple gags, existential ramblings and surprisingly dark humour. The series opens with a spooky explanation of the kokkuri game against a blood red moon, only mere seconds later to dive in with the twosome’s first meeting to depict it as not quite be the haunting you’d expect. It takes a lot of finesse to pull off such a range of styles, so to see it executed so well really is a treat.

The best comedies are usually the ones with the most heart, and this series’ emotional resonance comes from the loneliness our two lead characters face. Kohina isn’t just unusual due to her expressionless personality - she doesn’t have any friends and lives all alone in a dark, dusty house with only her enormous collection of instant noodles for company. Meanwhile, Kokkuri’s position as a deity is long forgotten, coming from a derelict shrine that was only ever visited by Kohina. Their identities of the doll and the spirit are more than just labels, they are symbols of the two characters detachment from others.

As the relationship between the two develops, Kohina slowly starts to shed her doll-like demeanour and become a “real girl”. This is brilliantly realised visually, as in times of great emotion the super-deformed Kohina is drawn with more typical anime girl proportions. Of course, this transition takes time so her surreal view on life isn't quite over and done with just yet!

Despite an extremely strong opening episode, Kokkuri-san’s flaws begin to steadily show as more and more of the regular cast are introduced. The worst offender is Inugami, a dog spirit who stalks Kohina simply because she was the only one to acknowledge him back when he was a real dog. While the duo of Kohina and Kokkuri works because there’s some sort of balance of power between them (with the first episode establishing that deep down the two do need each other), Inugami’s stake is completely one-sided. Most of the time Kohina wants him to simply go away, yet he’s constantly tricking her with marriage proposals, trying to “consume” her or worse. It’s the kind of overbearing character that would probably work in small doses, but not as a main character and certainly not at a point where the lead cast is only made up of those three. Admittedly drunken tanuki spirit Shigaraki benefits from a much stronger introduction, but his arrival still brings a new dynamic that feels far less intimate. With the end credits sequence teasing even more characters joining the fray beyond the four episodes viewed here, there’s certainly a fear that too many ingredients will end up spoiling the broth (or in this case, the ramen).

Finally, if the actual episode content of Kokkuri-san doesn’t seem to fill your quota of cuteness for the day be sure to stick around for the next episode preview segments. Well, they’re less previews and more a chance to show off the pets of Japan (though where the video footage is actually coming from isn’t quite clear). It isn’t much, but seeing ten seconds of a cat or dog with a silly name is certainly never a bad thing.

You can currently watch Gugure! Kokkuri-san in streaming form on Crunchyroll.

7
A funny and heart-warming introduction that brilliantly sets up its leads, but quickly shows signs of perhaps adding too much too soon.