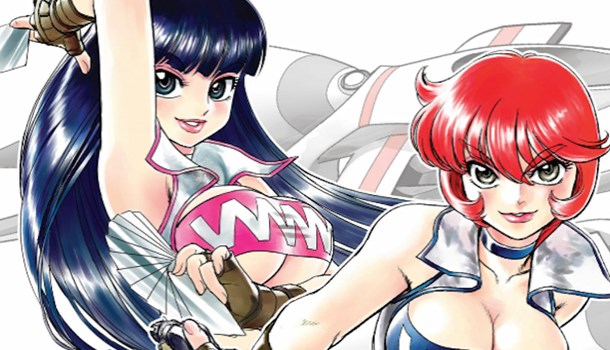 The Dirty pair are what I would consider a true classic in comedy action storytelling. The original stories were written by Haruka Takachiho and published in 1980. In the decades that followed we've seen multiple iterations of anime and manga (including an anarchic Western series by Adam Warren of Empowered fame) in the decades that followed. Most of these stories can be found easily on Amazon if you want to explore the many varieties of Dirty Pair action on offer.

The premise is that mankind has left earth and colonised the stars. Akin to Star Trek there is a galactic federation of planets, but problems throughout the colonies are dealt with by a profit making organisation called the World Welfare Works Association. If you have a global problem (and the appropriate funds) WWWA will send in one of their “trouble consultants” to review and provide subjectively the best solution.

The stories follow the Trouble Consultant Team 234, codenamed “Lovely Angels”. The team is made up of fiery tomboy Kei and the svelte and dangerous Yuri - known throughout the galaxy, their reputation always precedes them. Much to their ire, they are commonly known as the “Dirty Pair” due to the path of destruction that inevitably results when they engage in a mission. Although they have a high success rate, it's not always appreciated due to their inability to consider whether the ends justify the means, usually leading to excessive collateral damage!

Whatever the iteration of the duo, there are some constants. Kei always favours large artillery, and Yuri prefers alternative weapons such as throwing cards. Their tales tend to be comical romps with plenty of ecchi and action, and so it proves here. How did this omnibus fair in the larger canon?

What we have here is the original light novel, retold with modern artistic sensibilities and split into two parts, handily collected in this handsome omnibus volume.

Art is provided by Hisao Tamaki who also worked on the Star Wars manga, which certainly qualifies him for galactic adventures of The Dirty Pair. There is a notable departure from the original designs which, while always sexy, were positively conservative compared to this new take. The sci-fi uniforms are gone and replaced with skimpier attire that makes a lot more of their assets Whilst some may find this change surprising, I didn't find it jarring personally (I think Ross raised an eyebrow which is how I ended up with this review!) For me, the attire and art style fits with the comedy action genre of the current year, and fit the personalities of our leading ladies just fine.

The first story has our valiant team follow up on a factory explosion. As with most Dirty Pair stories, it's not long before the leads are dodging endless bullets and bombs with their butts and busts unscathed. Whilst there are moments where credibility may be a tad stretched, it's all in service of the comedy and dynamic action - it certainly makes the art pop, so you can overlook this.

Pacing is good and banter between the characters flows freely - most of it tends to be about how they feel about their awful nickname and lack of success with the opposite sex. Not every line is comedy gold but It was enjoyable nonetheless.

Part 2 was more of the same, though ramping up the dials on all levels. There was more character development, a few more physical feats that challenged physics, a lot more explosions and way more fan service. Much like the first it was lighthearted fun that is easily forgotten, though fun while it lasts.

I really enjoyed this collection - I remember far more about the art style and the action than the plot, but I'm still pleased to have it on my bookcase as its the sort of thing I would gladly grab if I wanted something quick and fun to dip into.

That said, this won't suit everyone. The overt sexualisation of the characters may put off some who find it a bit tasteless or tacky, and those readers may prefer the comedy and action in series such as Assassination Classroom or One Piece instead. Conversely something more serious like Gantz or Naruto may be more compelling for action junkies, but for those who enjoy curves, guns and explosions, this one's for you.

7
Fun, physics-defying feats of action filled to the brim with fan-service.