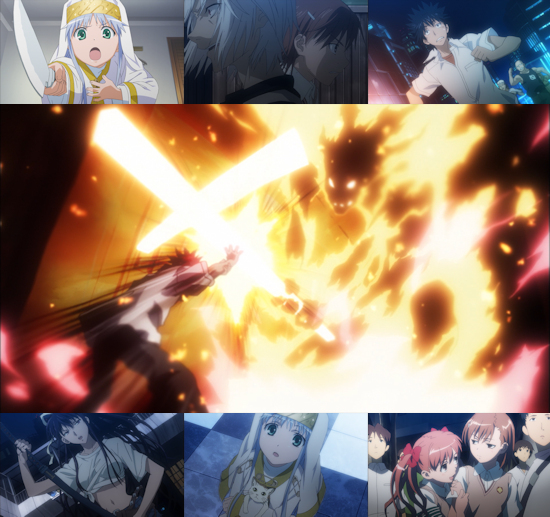 First we had the One Piece years, which was followed by the era of "Raildex" - now that both of these oft-requested shows have been licensed for a UK home video release, what on earth are we supposed to ask for next? Let me subliminally suggest that Hyouka be the next subject of constant pleas to UK distributors...

Anyhow, after years of plaintive requests via social media, event panels and letters penned entirely in the sender's bodily fluids (we assume at least, I've not seen the evidence for that last one), A Certain Magical Index and its sister series (with every pun intended) A Certain Scientific Railgun are coming to the UK, and quite rightly its arrival on home video begins with the anime adaptation that started it all.

A Certain Magical Index quickly introduces us to Academy City, an advanced area which is solely geared towards providing education and habitation for students, with a view towards teaching them to discover and grasp their hidden potential - not in terms of their everyday abilities, but via special espers powers gained by the discovery of an individual's "personal reality". These abilities are ranked by the powers that be, from Level 1 all the way through to the cream of the crop, the handful of individuals that boast a Level 5 ability.

This in turn brings us to our protagonist - Kamijo Toma, a young man with a seemingly endless supply of bad luck who has also been classed as a "Level 0"; that is, someone with no special ability at all. Late for remedial classes and with a power outage wrecking the contents of his fridge, we join Toma at a bad time... and it only gets worse, as he finds an oddly dressed and insistently hungry young girl draped inexplicably across his balcony.

The girl is Index and the hunger is the least of her concerns, as she claims that she's being pursued by magic-wielding individuals looking to do her harm on account of the vast library of religious and magical grimoires contained within her head. This whole tale clearly sounds like trouble, and although Toma lets Index go on her way after feeding her, his misfortune isn't so lax as to let him off scot-free, and before he knows it he's fighting powerful magicians in a desperate bid to keep Index safe from harm. It's a battle which brings him into contact with some surprising and difficult truths, but one that also confirms that this mere Level 0 has a power unsurpassed by his peers - a right hand that will literally destroy anything supernatural that it touches, whether born from magic or an esper's ability.

So begins a series of adventures for Toma that ultimately follow the same progression - Toma bumps into someone (usually a girl) in trouble; said trouble turns out to be down some malicious use of magic or science; Toma finds the culprit; Toma uses his right hand - infused with an ability which comes to be known as "Imagine Breaker" - to defeat them, usually by punching them in the face. Often multiple times.

What makes this rather rote-sounding show so enjoyable is its immaculate sense of world-building. Academy City is a fascinating place - teeming with life and mystery, and where every major character can do something cool at the drop of a hat whether it's teleporting, firing off bolts of electricity or communicating via telepathy on the science side of the coin, or summoning flame monsters and golems on the side of magic. The series doesn't shy away from indulging in huge reams of jargon to describe all of this stuff and how it's possible, which it manages to pull off with its sheer audacity - when you explain a spell via a plethora of Biblical references it somehow suddenly becomes believable, and likewise a hefty lecture of pseudo-science has you believing that anyone could control any physical property they fancied if they'd only put their mind to it.

Admittedly, this sometimes reduces the series to a bunch of talking heads spouting nonsense (a problem which afflicts many a light novel adaptation) but for the most part it manages to get away with it, and the only times the overly verbose nature of the series causes the show to suffer is when it tries to pack it alongside an action scene - witness Toma taking several minutes to run at full tilt across a tiny apartment room just to make room for all of his dialogue.

As the show continues, a gulf also opens between the science and magic sides of the equation - the show's magical elements start to feel a little hokey compared to the better-realised and more grounded world of science within Academy City. You could argue that this is in part the point of the series as it pits these two polar opposites against one another, but it's a point that we'll doubtless be revisiting when we talk of A Certain Scientific Railgun which benefits hugely from this disparity in the intricacies of the two factions.

The result of this is that the strongest story arc of A Certain Magical Index's first season features no magic at all, focusing instead on Level 5 "railgun" Mikoto Misaka and her struggle to stop an experiment carried out using mass-produced clones from her DNA. This particular story arc has it all - great characters, great action, substantial drama and emotion and room for just the right amount of smartly placed humour and fan service. If you want to show this series at its best, the Sisters arc is where it's at.

The good news is that the remainder of the series also contains many of the same enjoyable elements, albeit to a lesser (and more varied) degree - every arc has some truly cool twists or moments to luxuriate in, helped along by some fun character moments and silly scenes of fan service and based upon the strong foundations of the rich world that the series has built. Some story arcs run a little long or meander too much, but the overall experience is an entertaining one. Even series protagonist Toma stands out as a cut above similarly placed characters from other series - sure, he's not "man of the year" and the growing bevvy of girls that surround him isn't entirely believable, but he at least has the ability to think for himself and acts on his own self-determination rather than spending the entire show simply doing what others tell him to.

In terms of its presentation, A Certain Magical Index isn't the greatest looking show you'll ever see - it has its moments and Academy City itself is well-realised, but in general it's merely passable and is well served by its plethora of great-looking and detailed character designs. As the show wasn't natively animated in HD, this isn't a series that will blow you away on Blu-ray and should look perfectly passable on DVD. Our BD review discs looked pretty decent for the most part with only occasional scenes which didn't upscale so well and were clearly animated at a low resolution in the first place.

Compared to the stellar (and energetic) original voice cast, it has to be noted that the English dub for this series is truly bad - almost every performance is delivered with the minimum possible energy, effort and passion, and the cast might as well be reading from the phone book rather than acting; one suspects that they simply had no real excitement for the series, as their bored delivery does no favours to what otherwise seems to be a decent English script. Still, at least the show's fantastic soundtrack is there to pick up the slack, bursting with insistent, thumping, driving (and sometimes decidedly sinister) electronica throughout that powers you through some of the show's overly verbose moments and cranking up the excitement or tension when things burst into action.

In a sense, it's truly unfortunate for A Certain Magical Index that its spin-off proved to be so proficient - watching this series reminds you of just how adept A Certain Scientific Railgun has been at picking out the best characters and story elements to create a work to refine Academy City and its residents into a genuinely great offering. Thankfully, that doesn't mean that this first season of the show "proper" is a slouch - it has a lot to offer, not only as an introduction to Academy City but as an avenue for some good stories and characters in its own right. It's a little too inconsistent and rough around the edges to be called a true gem, but A Certain Magical Index's first series is still capable of pulling a rabbit out of its hat, albeit not with the regularity it might like.

English 5.1 and Japanese stereo audio with English subtitles. Extras consist of US cast commentaries for episodes 3, 6, 14 and 23, along with clean opening and closing songs and a US trailer.

7
There's a certain charm and magic to this series, and you'll probably want to add it to your index of anime on home video.
COMMENT AND DISCUSS
blog comments powered by Disqus