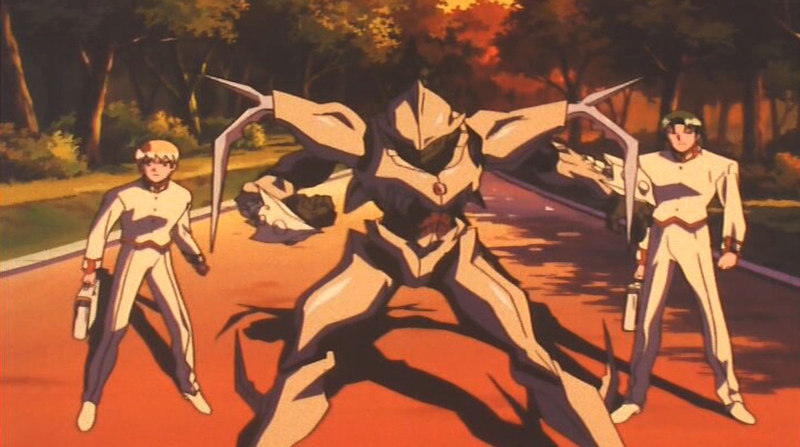 The best way to sum up Generator Gawl would be a soft Guyver with time traveling overtones. 3 teenage guys have transported themselves to the past, in order to prevent some as yet unknown menace from (presumably) destroying a good chunk of humanity.

With Gundam Wing style marketing savvy, we're given 3 pretty boys with characteristics that should appeal to the widest possible audience - hotheaded fighter Gawl should get the testosterone vote from the guys, and be suitably attractive to the ladies. Koji is the cool pony-tailed leader type who's dark and moody, and Ryo is the cute quiet one who keeps the team together.

Thankfully Gawl infuses a lot more character development and plot than the Guyver ever attempted, and as such it holds your attention after the initial fight scenes have ended. The team works well, and the interaction between them is convincing - they really do act like an efficient unit. The sub is as good as you'd expect, and the dub is better than you'd think - the voice actors convey their characters very well, and by the end of disc one I'd settled on the dub as my medium of choice.

However, the animation is really nothing special, with uninspired character designs and pretty bad music which damage the overall package, but despite this it remains very more-ish - its extremely accessible and despite its run-of-the-mill output qualities, worth getting hold of.

If you want something darker with more mech and less monsters, go for Gasaraki, but for a slightly lighter monster-mash, Gawl could well be for you.