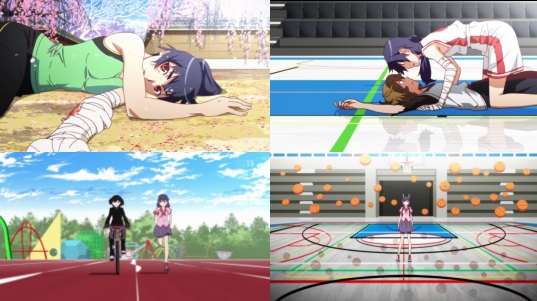 At long last our long cold season of waiting is finally over. What, winter? No, no – the time its taken to get our hands on the new Monogatari release from MVM Entertainment! It's been a whole year since Koimonogatari but the time is nigh for the series to return to form as Kanbaru finally takes to the stage once again in Hanamonogatari.

A short time after the events of Koimonogatari, Kanbaru finds herself more-or-less alone in her high school life as Araragi, Senjoghara and Hanekawa have all graduated, leaving her and her cursed arm to their own devices. Fortunately Kanbaru’s boredom is lifted when she begins to hear rumours of the ‘Devil Lord’ who can solve all of your problems. Deciding that getting to the bottom of the rumour is what Araragi would probably do she quickly tracks the source to an old basketball rival - the enigmatic Rouka - who quit the sport some years ago after injuring her leg but now appears to have found herself a new hobby.

Kanbaru is one of the characters that the Monogatari series has tended to underuse quite a lot. In fact you’d be hard pressed to pinpoint her involvement in any of the series stories since an extended cameo back in Nisemonogatari. Its a shame given that her character is just so much fun with her pretty carefree attitude, open lesbianism and naturist tendencies. The interplay between her and Araragi has always been brilliant fun so it seems odd that they’d decide to use her as the lead in an arc that’s basically a two-hander with a character we’ve never even heard of before. Oh there are other characters who pop in now and then (Kaiki’s new look is bonkers!) but at its core this is a pretty low key personal story. Between this and the preceding Koimonogatari there’s certainly the sense that some experimentation is going on behind the scenes to try and figure out if the series has legs now that its leading trio no longer play into its setting quite as well. Does it work? Well, mostly.

As we’ve mentioned, Kanbaru is a great character and the way she handles the various problems thrown her way is certainly interesting to watch. Rouka proves to be a very interesting personal adversary as well, to the point where it would have been nice if their relationship had been set up more in prior episodes somehow. The issue that comes up though is that Kanbaru really needed someone else to play off through the story. Karen comes up on occasion and she’d have been a perfect foil but the series chooses instead to keep her mostly off-screen talking via the phone. The result is that things don’t quite manage to play out evenly across the five episode run time (pacing and Monogatari have rarely been great friends after all). On the other hand the story itself, which proves to be about as straightforward and classical a story as the franchise has ever done, plays out really well and it’s great to see Kanbaru finally getting to step up and lead a story again.

Visually this is as bonkers as the franchise has ever been with bizarre basketball courts, book dominoes and a haircut that makes it look like one of the characters is getting ready for a Cousin It cosplay. For an OVA though it does seem to cut quite a few more corners than you’d expect – things don’t get as bad as Koimonogatari (which ended up resembling a motion comic at times) but the series certainly never reaches the kind of flair that characterised the earlier arcs either – a couple of basketball matches that serve as action set pieces could really have done with a bit more work put into them  and the opening and ending credits, traditionally a franchise strong suit, don’t quite get there either.

All in all this is an improvement on the last arc but it still has a long way to go before we return to the heights of Nekomonogatari White - besides which, the bar for the series' visuals has been moved even higher too with Kizumonogatari looking stunning even in trailer form thanks to its bigger budget. Still, there’s plenty more Monogatari to come and this far down the rabbit hole you’ll be satisfied enough with this release to keep on going just to see what those crazy SHAFT folk throw up next.

7
A solid shot for the franchise that falls just short of the mark.
COMMENT AND DISCUSS
blog comments powered by Disqus