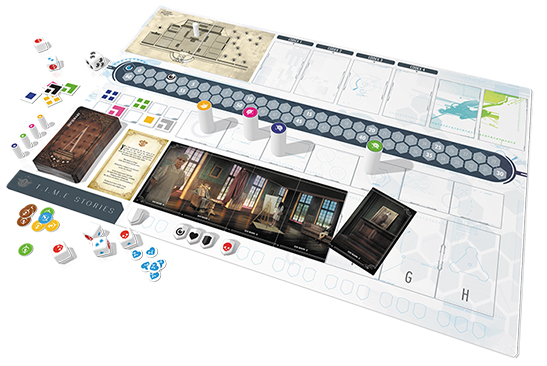 Think of this game as a cross between a murder mystery dinner party, a game of Cluedo and an escape room. You and your fellow players are members of the T.I.M.E. Agency, challenged with protecting humanity by preventing faults in the timeline that threaten the universe. On each assignment, you are sent to take on a challenge in different times and places by using an inhabitant of that location as your avatar. This is a collaborative game, so you are working with your fellow players to try and solve the mystery – pick your colleagues carefully as you are likely to want to get the same group together for each attempt.

There is a rather large rulebook for the game, but it is extremely well put together, so after one read through I both fully understood the game and was able to explain it to others. The game contains markers for players, dice, a board and various other small pieces that you need to lay out at the start. This process doesn’t take long, so you’ll be able to go through the rules and set up the game in about 30 minutes. The majority of the components are of very high quality, but you do have to attach coloured stickers to the top of the white markers, but the sizes don't quite match each other. It would have made more sense (and lifted the quality of the pieces) if the markers were just painted different colours. To avoid spoilers, only when you are completely prepared to start the game do you open the set of game cards.

It is important to work through the cards as directed and that they are kept the correct way up to avoid ruining the game. You start the game in the T.I.M.E. agency headquarters, you then travel in time and select a character, each with their own unique skills, to inhabit at your new destination. From here on in, you are on a time-limit and any actions you take will cause the clock to tick down.

You move through different locations in the game and in each room you investigate, analyse clues, pick up items – which may or may not prove useful – and then move on. Sections of some locations are locked and you need to meet a condition or have a certain item to open them. Visiting other sections will mean that you are trapped and are unable to leave until you complete a challenge or fight off an aggressor. As one clue leads to another, the challenge is to solve the mystery, before your time runs out.

The game requires three or four characters to be used, so you can play with three or four players where you control one character each, or you can play with two players and control two each. Games can be long, but the box is cleverly designed to enable you to pack it away halfway through a run so you can come back to it later – the board game equivalent of saving your progress in a computer game, a great touch that I have never seen before.

If you fail in the mission, then you repack your cards (numbered to easily allow you to do this) and you get to take another run at it, either straight away or leave it for another time. If you do solve the mystery, that’s it and it’s time to move on to the next mission. Some people may feel that this aspect of the game means that it isn’t value for money. However, I would point out that you could spend the cost of the game on a murder mystery party set or a trip for four people to the cinema, both of which only last one night! So far Ross and I have had three nights of entertainment out of this story and if we don’t get our act together with our strategy, it could be many more!

T.I.M.E Stories has eight official expansion missions that you can purchase, costing between £18 and £22. This game has also proven so popular that there now exist lots of fan-written expansion stories for you if you can get your hands on them.

What attracted me to this game was how different and exciting the concept was and it did not disappoint! Ross and I played the first T.I.M.E. stories scenario, which is called Asylum, and takes you back to 1921. We have taken three attempts and have not yet solved the mystery, which I see as a good thing. I would have been thoroughly disappointed if we had completed the game on the first run, so I am pleased that it is challenging enough to keep us coming back.

Each attempt, we unearthed some new information and refined our strategy, meaning that we got a little further along on each attempt. We generally agreed on what we should be doing, but there was a lot of discussions and it even got quite heated at one point. This just goes to show how enthralled you can get in the scenario.

It could also be possible to get into character as the person your T.I.M.E. agent is inhabiting in order to create more atmosphere, much as you do with a murder mystery party. This wasn’t as easy for us, as we were playing two characters each, but we did make sure that we carefully selected which characters we wanted to use and made the most of their attributions. We were also sometimes caught out by their weaknesses.

We both thoroughly enjoyed this game, despite having different strategical approaches at some points. We continued to discuss our strategy long after the game was packed away after each attempt, as we were keen to learn from our mistakes and make sure we remembered where key clues and red herrings were hidden ready for the next run.

This game may not be for everyone, but I loved it! Like all well structured collaborative games, the element of competition that you get from other games is not lost, because you are competing against the game itself. In this case, the game has proven a fierce opponent!

10
I loved this game, so if you like what you hear, take your friends on a trip through time!
COMMENT AND DISCUSS
blog comments powered by Disqus