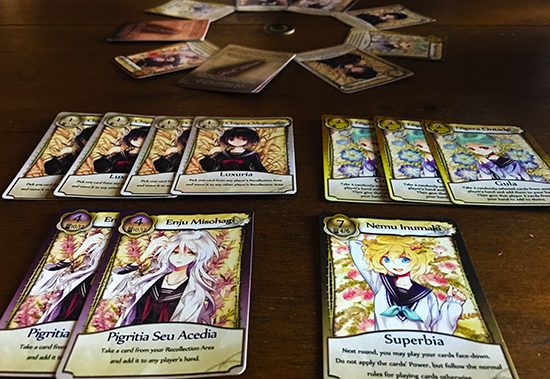 Young women across the world have started to develop strange abilities. At first this transformation was applauded, but it soon became apparent that some of the girls were unable to control their powers and they then started to be viewed as a threat (this may sound familiar to X-Men fans). Their infliction became known as the ‘Terrifying Girl Disorder’ and agents were soon being sent to track down and kill or capture these young women.

In this game's scenario, agents have entered a school in search of some inflicted girls. In the chaos, one girls’ powers end up wiping the memories of all the girls present. As one of the girls, you are now unaware of who and where you are and must go through counselling to try and discover your true identity.

This is a small game with just a few components:

The game takes place over five rounds of the following phases:

Scoring at the end of the game is decided by looking at which character you have placed the most of during the game. Throughout the rounds the key is to keep an eye one which cards your opponents are playing and picking up to try and figure out which characters they may be collecting in their hand.

After five rounds, the cards that you have placed are used to reveal your true identity. The assignment of identities and scoring phase is the most complex part of the game. Make sure you fully understand this process before you start, as that is key to your strategy throughout the game!

This is a lovely little game with beautiful artwork, although if you are used the wonderfully complex and vivid artwork of games like Vanguard G, you may find these images a little basic. Also, there are only seven characters, so the artwork isn’t very varied.

The card-drafting system, using the cycle in the centre of the table, is something I’ve never come across before, so it adds a really unique element to the game-play. It is also interesting that the player rotation switches between clockwise and anti-clockwise each turn, although we did keep forgetting this, and were getting confused whilst we were learning.

The playing rounds are pretty straight-forward, but the scoring and strategy is complex so it does take quite a few games to completely grasp how to win and learn the benefits and pitfalls of each of the different card types. It is also a little restrictive that this game can only be played with three or four players and the rules book could do with being clearer.

Having read a few online comments on the game, it is clear that a few people have really struggled to get to grips with this one, but I can assure you that if you stick with it, it’s worth your while!

7
A fun little game based on discovering your true identity as a super-powered girl!
COMMENT AND DISCUSS
blog comments powered by Disqus