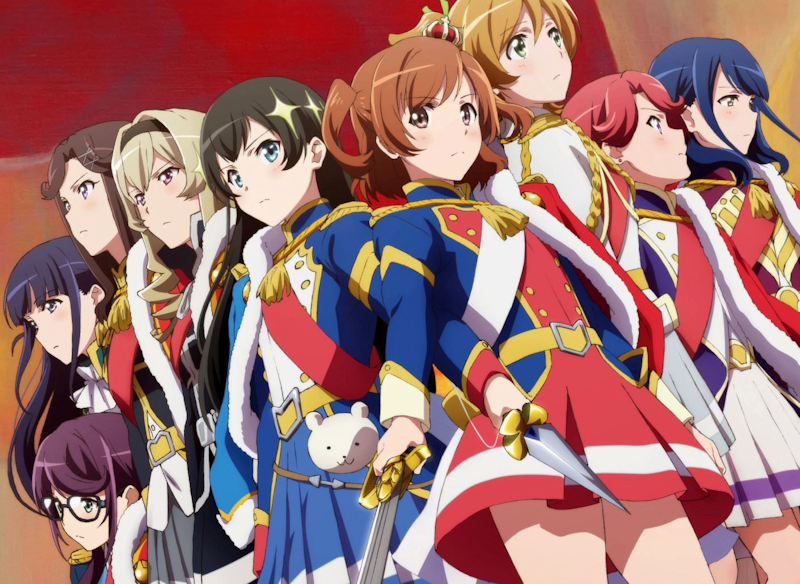 I had not seen Revue Starlight before, but the name rang bells. Quickly googling the name it was immediately apparent that It would be more surprising if it hadn’t hit my radar. Revue Starlight was created as a multi-platform media franchise. It was a collaborative work created by Bushiroad,(Cardfight Vanguard and other card games) Nelke Planning (producer of theatrical productions)  and Kinema Citrus (anime studio). It was first was released to the public in 2017 as a musical that was only on for only a couple of days at a theatre in Tokyo. This was followed by the 12 episode anime, originally released in 2018, that we have in this Collectors Edition courtesy of MVM. The series has also received three manga adaptations and a popular smartphone game titled Shōjo Kageki Revue Starlight: RE Live. Right now there is a compilation and I gather a sequel film in the works too.

So this is clearly a franchise designed to grab my attention and keep me hooked. This isn't the fist series to be designed this way (see our recent Kadokawa Jet Girls review) and the proof will be in the proverbial pudding as to whether or not this is a success or failure.

The Collectors Edition is supplied in a handsome case with attractive artwork featuring 2 of the lead protagonists. Included in the box there is a 64 page art book and 10 art cards. Neither of these were received with the review discs though based on images I’ve seen online they do look lovely and welcome in any fan/Otaku’s collection.

That brings us to the anime itself. The show is an all female cast and centres on eight young women who have decided to attend Seisho Music Academy. The lead is Karen Aijō, an enthusiastic, energetic and yet somewhat lazy character reliant on her own raw talent rather than actual effort.  Karen has joined the school having promised her childhood friend Hikari that they would be on the stage with the starlight revue 12 years ago. T

This all seems quite straightforward and bar the clues in the intro you may assume that this is going to be a slice of life drama piece. A modern Fame or Glee with an anime glaze. The first episode introduces you to the eight women who have joined the academy and they all seem to get along despite a minor sense of tension and competitiveness between the protagonists. The characters are all likeable if a bit stereotypical, and none of them immediately leapt out in a dramatic or humorous  way. If I based my view on  the first 10 minutes or so I might have switched off deciding that perhaps I was not the audience for this.

There is indeed more to the anime than it first appears; at the end of the first academic day the girls receive text messages signed off with a giraffe icon. The message invites them to a special starlight revue. Accepting the invitations, the girls find themselves taking an elevator (that’s not usually there) to a giant circular stage on which they are to audition. Tasked with showcasing their dramatic and acrobatic skills, the matter is complicated by each of them engaging in battle in a one-on-one fight between classmates. They join the stage in a militaristic style uniform, each wielding weapons. These epic fast-paced battles are fought with dramatic backdrops that often seemed to magically change around them, reflecting the thoughts and feelings of the combatants. The characters also seem to be imbued with magic given that physics are largely ignored,  jumping as they do to incredible heights  and throwing themselves about with superhuman skill, never batting an eyelid whilst doing so. Whilst they did passionately strike at each other I do not recall anyone ever getting really injured. The audition is over when one of the girls manages to cut free their opponent's cape.

These Revues are really the bread and butter of the show. They are fun to watch, and with each fight between the various pairs you learn their motivations and how they each learn from the experience. This shows far greater character depth and development than you might expect from a show such as this.

The giraffe that convinces the girls to undertake the auditions by promising that the winner will become the Academy's "Top Star", perhaps a study of the cutthroat nature of the  music industry and the lengths people will go to attain their dreams and the corruption such competition can create - while Karen’s original promise may be purely motivated, how far is she willing to go to become number 1?

As a show all about musical theatre I was not surprised to see how great the soundtrack was, and even the lyrics are pretty good. Animation and art style was vibrant and attractive, certainly designed with mass appeal in mind.

Overall, while the school drama and marginal personal conflicts are a bit overly familiar by now, the performance battles, mixed with a great soundtrack, create a great package. There is no noticeable ecchi or bloodshed so this can be shown to the whole family. I have found that friends of mine who were fans of the recent version of She-Ra on Netflix particularly enjoyed this.

Don’t get me wrong if you want more bloodshed in your battles or more flesh shown then this is probably not for you. If you want that to the extreme then Ikki Tousen is probably more your bag. If you like shows like K-On or Love Live, this is very much up your street.

8
Not a total showstopper, but a fine performance with girls wielding weapons to get to number 1!
COMMENT AND DISCUSS
blog comments powered by Disqus