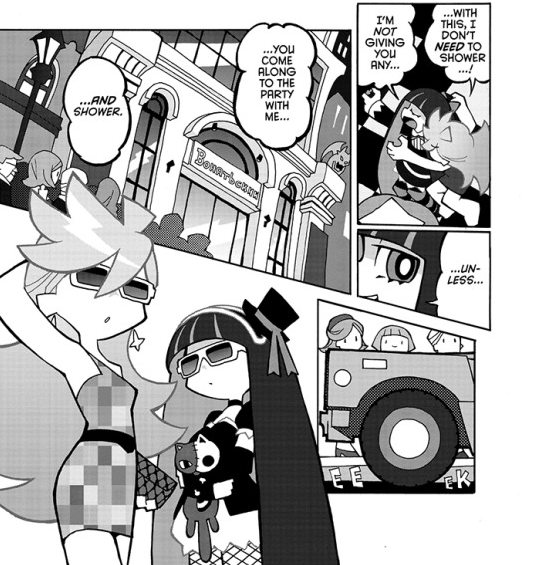 Panty & Stocking With Garterbelt was the last work by director Hiroyuki Imaishi before he split from GAINAX to found his own studio, Trigger, and he certainly went out with a bang. This infamously ribald cartoon might have seemed at first glance to have been little more than fishing the foulest floaters out of the "cartoons ain't just for kids" toilet bowl, but it rapidly shut up those who doubted it with Double-Ds of feverish inventiveness in one cup and cool style in the other. Yes there was scatalogical humour, but there was also so much diversity from freely mixing multiple animation styles, vivid and vibrant characters, bullseye parodies that didn't settle for the easy targets of grown-up geeks' Eighties nostalgia but also handled topics as far apart as Eraserhead and Leondardo di Caprio. This was all set alongside a wicked throbbing club soundtrack performed with such bravura confidence that one episode had its own full-length music video - and ever in the spirit of confounding expectations with a cheeky irreverent attitude that tweaked the nose of its audience as much as the media, it tripped you up out the door and left your face in the floor with a last-minute twist and a cliffhanger that was the visual definition of being punk'd.

The promise of a second season of Panty & Stocking With Garterbelt may have never been planned out further than GAINAX making a self-deprecatory play on its own reputation for unhappy endings, but as the driving force of the show now works for another company it's fair to say that it's never likely to happen even if there is a script typed up and ready to go. If that message "To be continued... in next season" is still taunting and aggravating fans of Panty & Stocking With Garterbelt though, you now have an opportunity to scratch that itch with the release of a manga with the further misadventures of the Anarchy Angels.

The Panty & Stocking With Garterbelt manga is an anthology of short one-shot adventures drawn by the mangaka TAGRO. While TAGRO has never been published in the English-speaking world, those of you who "Fly to Japan" to watch your anime may have caught the 2010-11 series of his best-known manga Abnormal Physiology Seminar (or Hen Semi in Japanese), a sex comedy where a university student tutorial group sedulously and clinically research all manner of debasements and perversions in the interests of social science.

After researching it I have to say that I'm not that much titillated by Abnormal Physiology Seminar - the high concept is quite clever with a distinctive spin that sets it apart from a lot of other published ecchi manga, but it doesn't make best use of its own gimmick. Abnormal Physiology Seminar would be best suited to a deadpan delivery where the absurdity would be exaggerated by replacing cuffs and chains with clipboards and cardiographs, but while there's a shy and embarrassed girl to act as a foil for her more 'studious' classmates the cast are really rather too into it, so it loses some of its cod-academic quirkiness and becomes just the antics of a student swingers' club which you can already get any one of a thousand other doujinshi with no pixellation. One of these stories though is a crossover between Abnormal Physiology Seminar and Panty & Stocking With Garterbelt, so you can get a taste of TAGRO's own proclivities and judge for yourself.

There is novelty value in the Panty & Stocking With Garterbelt manga because all of the stories in the book are original tales, so fans of the anime can be reassured that it isn't just a rehash of what they've already seen. While TAGRO spends a lot of his afterword putting himself down and telling us that he's a terrible artist, he needn't have bothered with that old rhetorical trick because he has done a good job here - he's replicated the style of Panty & Stocking With Garterbelt exactly, to the extent that you could well imagine that you're seeing screenshots of new episodes of the show. The English sound effects also lash onto the page lots of energetic graffiti cool as well, bringing in plenty of colour even though the pages are in black & white.

The art is good, but what about the comedy? It has to be said that the manga doesn't start out all that well with a story that includes a dead-on-arrival "the cake is a lie" gag (although in the manga's defence it was originally published in 2010 when such jokes weren't so moulderingly stale) and bumping off the fourth wall more than breaking it - admitting that the joke you've just told is bad isn't enough to make it "ironic", y'know. One of the other stories is a weak Alien parody which despite all of the biomechanical phallic and penetrative gloop that such a title can bring up actually ends up being quite dry and flat.  Two out of the nine stories in this collection then are duds, but the rest are an improvement: although their humour is all gross-out, focusing on various bodily emissions and exudates, there's actually a fair amount of twistedly appalling inventiveness on display, and as sick and scatological as it is you can't help but laugh at its sheer audacity (one of the ghosts the duo fight is an uncomfortable reminder about just what goes into making perfume; and the moon is indeed made out of cheese, albeit not the sort of cheese you get from an udder). Once they've fired off the shock of the sight, though, there's not much else to come back to. The final story doesn't really have much humour and is mostly just an opportunity to give quick cameos to other characters Scanty, Kneesocks and Brief who were missing from the rest of the book, but it's oddly quiet and calming watching the angels drive along the coast road and a well-placed opportunity to wind down after the barrage of blue that preceded it. The "Ghost File" omake at the back of the book is also a bit of fun, in a weird way feeling like collecting some old trading cards. The translation also definitely punches up the script with a colloquial voice that adds a lot of character (even helping to rescue that earlier 'cake is a lie' gag from Stocking as Panty spins it around to herself) to the back-and-forth between the bickering angels - even the reading-the-wrong-way warning page at the back of the book has a bit of a pun in it!

Panty & Stocking With Garterbelt is a slim volume, and unfortunately that also means it's missing some substance too. While I admitted at this review's start that Panty & Stocking With Garterbelt had vulgar humour, it also had a lot of variety to give it backbone as well; this manga version throws everything into being crude and rude, which gets you a few guffaws but they dissipate as soon as you've reached the end of the book. Great presentation lifts it up but while the art has nailed down the anime perfectly the writing only has hold of one part that made it both fun and funny - if it had been longer it might have filled in the rest but as it stands it blows its load early - you won't have a long relationship with this mnaga but you might enjoy a one-night stand.

6
It gives gross-out guffaws to be an effective gag(ging) manga, but it's too brief to be more than a quick 'n' very-dirty one-shot.
COMMENT AND DISCUSS
blog comments powered by Disqus