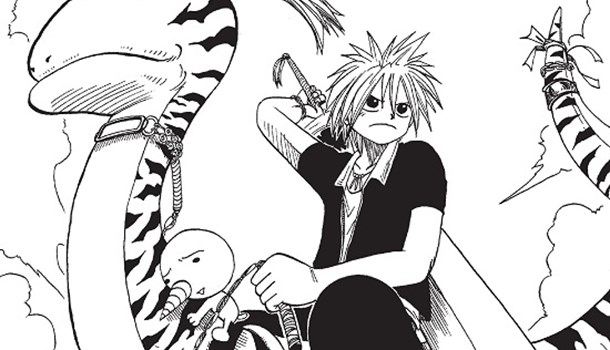 When someone bought this for me as a gift, I was kind of puzzled. Not only was the name Rave Master new to me, but the fact that it’s characters involved a bizarre talking sunflower thing, and what seems to be a cross-breed between a dog and a snowman. What freaked me out even more was that the preview for the second book is in song, as a matter of fact it comes in the form of alternative lyrics for the hit Nirvana song Smells Like Teen Spirit. It is hugely popular over in Japan, where as far as I know it was called Groove Master Rave, but for some reason it slipped through the cracks with me, but I’ll never know why.

The story opens on a teen at war, bruised and bloodied, thinking his batlle is almost over… fast forward 50 years, Haru Glory, another teenage boy, spends his days training so he can protect his sister. But his life is about to change dramatically, because little does he know, that he is the new heir to Rave, a stone capable of making a person stronger and more powerful; than they could possibly imagine. As the bizarrely compelling plot continues, it soon becomes apparent what kind of manga this is going to be. It’s pretty standard teen boy stuff, you know the kind; Dragon Ball Z etc. but the thing is, this one is actually quite good! The story has more serious undertones, hidden by its generally clean and cheerful art.

The art is a nice, kind of simplistic style, like artist Hiro Mashima knew this was going to make it on to TV at some point. His character designs are modern and cute, and there is a pretty blatant Final Fantasy influence on the main character Haru, with his oversized sword and spiky hair, he looks very much like Cloud from the Final Fantasy VII. Its not like he ripped it off, and it might be only me who sees it, but its definitely there. Haru’s “dog” Plue is the real gem though, he has four legs, a tail, but no ears and a cone(a very carrot-like cone) for a nose. He plays a big part of the story, even if all he can say is “Puun” and pretty much all he does in this first volume is run away for a few pages and eat candy.

I think that Rave Master could be destined for big things over here if the series catches on in the US, and I’ll definitely think about buying further volumes in the future. Some may feel its not grown up enough for them, but for those who like a good bit of fun and action, then this is for them.

8
Its not an epic adventure that’s going to blow you away, but it’s a fun action story that does the job nicely.