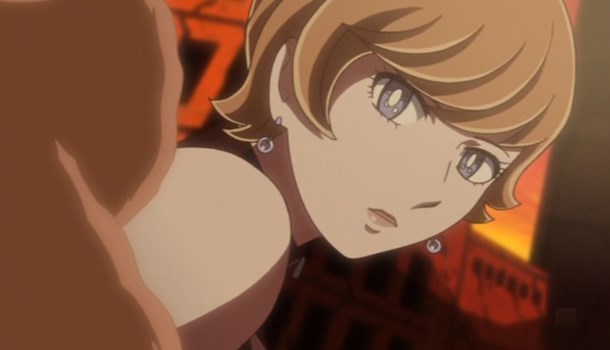 Boobs! There, job done. Review finished. I’m out of here.

You want more? Fine. But if you can’t guess what is already coming, well, just take a look at the cover of the DVD. That should give you a good idea.

Anyway, so what do we have? The Cold War has been raging for over 150 years to the point that the planet has split into two factions. The west block and the east block (imaginative). 009-1 follows the exploits of a female spy for the west block, Mylene Hoffman as she is sent on missions by her superiors to do James Bond type stuff. Cue panty shots, stupidly tight and revealing clothing and the need to have so many boob shots you’d wonder if they had time to actually do anything else with the series.

The problem with this volume of the series is that it tries to play on its sexual overtones to the point of ruining the premise and ending up as a series of fanservice shots.

This problem isn’t helped by the character designs of everyone bar the main characters. While the main four girls are somewhat nicely done, everyone else looks like a horrible hybrid of Metropolis and one of the more horrible Saturday morning cartoons. Yes I am aware that the series is based on the work of Shotaro Ishinomori, but for a show that is about espionage, the unrealistic and exaggerated looking characters seem completely out of place in the world that they are supposed to be a part of. It shatters the reality that the series is trying to produce and does very little to keep you involved or care about any of the characters.

So there it is. Uninspired character designs and no focus pretty much stop this series dead in its tracks. Yeah, something interesting might happen, but you’ll be so annoyed by the parting panty shots and rubber-faced secondary characters you’ll be wanting to burn the DVD in a ritual sacrifice just to see if you can cleanse your DVD player of the evil within.

So unless you’re a teenager going through puberty and have the urge to stare at as many breasts as possible, then you can still do much better than this. (Najica or Aika perhaps? - Ed)

The usual selection of extras that we’ve all come to expect:
Clean opening and closing animation.