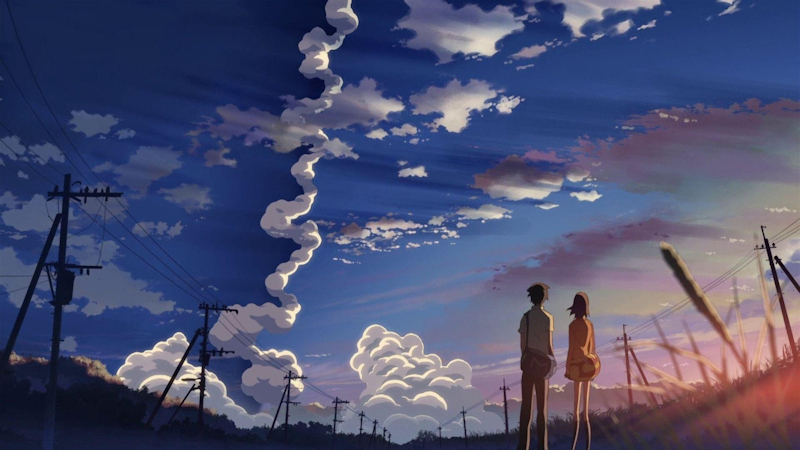 5 Centimetres per Second feels like its been a long time in coming to our shores. I remember back in 2008 when the film was shown at the London BFI Southbank cinema, and I had the privilege to see the film introduced by its director, Makoto Shinkai. There was an enlightening question and answer session with the creator himself after the screening which included one rather bizarre question where someone asked when it might be coming to the UK in a format they could own. It felt like an odd thing to ask the creator, and the interviewer handled the question by indicating that it would be out "as soon as possible". After that there was an autograph session with Shinkai where I had a copy of his art book autographed. It sits on my bookshelf to this day.

Now, almost three years after that viewing, I could finally sit down and see the film again. Going into this I had a mixture of excitement and dread - the excitement because I knew I remembered connecting with it before, and the dread because I am a massive wuss and anything I connect with is likely to make me cry. At least this time I could watch it in the privacy of my own home.

First, a quick word about mundane technical aspects of the release, just to get it out of the way. The disc is presented with a simple static menu - a personal relief as I am fed up of seizure inducing animation in DVD menus. One disappointment was that setting the DVD to play the Japanese audio track with subtitles did not actually work - the subtitles would display but the English dub track still played, although a quick bit of fumbling with my remote fixed this. One thing I want to praise on the release is the restrained sizing of the subtitles - they are easily legible without consuming large swathes of TV real estate.

5 Centimetres per Second is not entirely a single film as it is split up into three distinct chunks, each with its own plotline presented as a snapshot of a certain time in the life of the main character Takaki Tono. As the subtitle says, the film is "a chain of short stories about their distance", with each segment focusing on different relationships throughout the character's life and how the relationshop with his childhood girlfriend Akari develop and change with time and distance. With one notable exception that I will get to later on, the three sections are utterly separate from one another in their presentation, sweeping you up in the storyline of the moment rather than simply adding items onto a single overarching plotline as the film progresses. Taken as a whole, the film evokes a strong feeling of melancholy mixed in with a hearty dose of nostalgia. This feeling is slowly and deliberately built up until it seizes a hold of you - paced just right so that you notice but do not dismiss it as it builds.

Another thing that helps draw you into the film is that it contains a number of repeating themes or objects to help link it all together into a cohesive world. As I watched the film again I found myself rediscovering these touchstones just as much as the main plotline. These really help to enrich the film as a whole by adding another layer to the events and characters, making the film a more cohesive whole and enjoyable even on the second or third viewing. The very climax of the film is very much open to interpretation, free of any real solid moral or lesson - the omission of a hard and fast “ending” fits the overall tone of the film and gives it a very welcome feeling of maturity. By leaving many things open for consideration by the viewer, the film lingers in the mind long after it has stopped playing, and encourages you to come back for repeat viewings.

While Takaki Tono works well as a main character in the majority, he is almost too much of a blank slate and his personality rapidly falls apart under scrutiny. He simply doesn't have anything solid or defining in his character to latch onto. His hobbies and interests are ill defined and those presented don't make a great deal of sense. In the first tale he introduces himself as being physically weak yet a few moments later is a member of the football club. Being such a character driven story this is a particular annoyance as it makes Takaki appear more of a “character” rather than a human being. At some points he is a downright sour and irritating person - hell, one of his lines is "sorrow gathers around me." Get over yourself, you idiot! You had a hot girl swooning over you for an entire third of the film and you never noticed, you have no damn right to complain!  But then again he is human, and being fallible or just plain dumb he excels, as do the rest of the cast no matter how small their part. All members of the cast have the gravity of their life experiences (or lack of, as it may be) behind their thoughts and actions, letting you accept them and get swept along in the movie even with its irritations. At times the characters can feel very small indeed, victims of the world around them and their circumstances, a feeling that will feel familiar to many.

From start to finish, the entire film is achingly, jaw-droppingly beautiful both as still image and in motion. This film has plenty of time and space for Shinkai to show you what he does best: making environments look absolutely stunning. Clouds, sky, lighting, sunlight, reflections, water, all look magnificent. There is one particular moment at an emotional cresendo around two thirds of the way through where the film takes a pause to show you a mesmerising scene of a space shuttle launching at sunset - you feel transported into the movie into the character's shoes, who can only stand and gawp at the beauty of the presentation.
Everything in the art feels that it was placed with a great deal of love, and the same goes for with the music. The film makes great and well restrained use of ambient music and effects to draw you in to the film and embrace you rather than shock. At multiple times I had to strain to pick out the music as it blended in so well with the visuals and the general feeling of the movie. The use of piano, already an instrument I adore, is utterly masterful.

However, there is one thing at the very end of the film that throws out everything that the film has built up and utterly face-plants. At the final lead up to the climax of the film all of the carefully curated pace and build up of the proceeding hour is thrown under a bus as the calm melancholic atmosphere is shattered by the grating throat belch of a song that starts playing. The visual accompaniment to this is a series of rapid cuts of various scenes from the film, including many snippets of scenes you have not seen up until this point. After all the proceeding careful build up this feels like a scrappy mess by comparison, and is frankly irritating to watch. All these as-yet unseen events are reduced to getting just a precious few seconds of screen time at most, and suddenly it feels like you have been denied seeing half of the film as many of these cuts are but snippets of larger events that are not properly shown. This is especially true of the cuts that pertain to the third section of the film as this final segment has not had long to build up its narrative and now key parts of its build up and resolution are stuffed into this impromptu music video.

There is a resolution of sorts right after this music video that closes out the film, which taken on its own is fine but you still end up with a sour taste in your mouth that lingers for hours afterwards. I am personally astounded at myself that I did not remember this awful conclusion from my previous viewing of the film, however the rest is so strong and cohesive that this is what remains with you. Perhaps I simply denied its existence as it was too disappointing to comprehend. However, even after three viewings what I still remember from the film is a well-realised tale of relationships and growing up even though I feel it could have been a stronger whole had the 3rd part been better fleshed out and the terrible music number excised.

I find myself coming away from 5 Centimetres per Second with a head full of wonderful visuals, sweet melancholy and a desire to see it again on a bigger TV, and I'm happy with that.

English and Japanese audio, English subtitles.  Other extras on the DVD include an interview with director Makoto Shinkai, interviews with the voice cast, a “Making of” montage and original trailer.

8
A wonderful, eye-popping film sadly let down by a single glaring flaw at its very end.
COMMENT AND DISCUSS
blog comments powered by Disqus