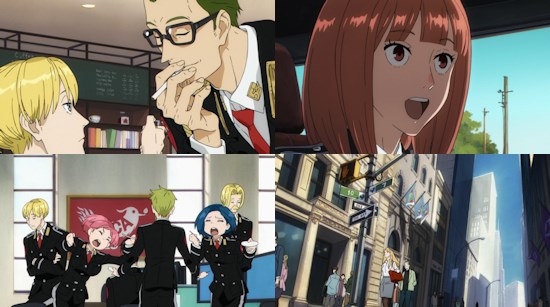 On paper, ACCA: 13-Territory Inspection Dept. (to give it its unwieldy full title) seems fascinating. An alternate Japan shaped like a chicken, and divided into 13 sub-territories; each with their own distinct customs and feel. Amongst this, we follow Jean Otus - second in command at the titular ACCA agency, as he heads off on bureaucratic little business trips to each territory to check that everything’s in order.
Is it a biting social commentary dressed up in a thinly veiled allegory for Japan? Is it a talky slice-of-life series, targeted at the more discerning anime connoisseur? ACCA is both of these things - though we can’t help but feel author Natsume Ono’s assorted cast of sharp-suited dudes will be the chief selling point for many too. What’s more, it’s not just the character art where the visual appeal of the show shines; Studio Pablo - who turned in such a stunning job with the striking background art for Kill La Kill and Seraph of the End - are back again, this time opting for a more subdued feel, echoing pastel-toned modernist pop art.
Watching ACCA feels a little like flicking through a glossy fashion magazine - a continual carousel of smart outfits, picturesque window-dressing and all-round visual flair. But beyond this, a world that remains unassailable to those not already deeply immersed in its inner workings. Intricate politicking and back-room scheming are nothing new in anime - but when done at its best it’s usually paired up with the adrenaline thrill of equally slick action scenes to clue audiences into the more tangible effects on society at large.
It’s here that ACCA finds itself sorely lacking - characters come and go, offering up vignettes of daily life and tidbits of information about a world that could have been fascinating, but is instead presented more as a kind of chocolate box facade. Through it all, the chain-smoking Jean Otus continues to makes his way through each territory, but even the deft storyboarding of Madhouse legend Yoshiaki Kawajiri (Ninja Scroll, Wicked City) struggles to inject life into the workmanlike doldrums of the investigator’s day to life.
For those lured in by ACCA’s attractiveness but finding themselves lost in the density of its wordplay, last year’s excellent Joker Game would make for a strong recommendation instead. Tarted up in the same slick, gentlemanly aesthetic, that series at least had the merit to offer up a spread of neatly condensed mini-stories that stood on their own as self-contained works, whereas ACCA feels like the kind of show where you need an encyclopedia on hand just to keep track of what’s going on.
Like many others, I went in to ACCA with high expectations, lured in by the attractive promo visuals, outstanding opening theme and the promise of Madhouse delivering another classic - but sadly, six episodes in, the show has deviated little from the formula offered up in episode one: talking, smoking, talking, smoking, and yet more talking...
You can currently watch ACCA: 13-Territory Inspection Dept. in streaming form on Crunchyroll.

6
Impenetrable and overly-wordy, but oozing so much style we’re sorely tempted to give it a free pass.
LATEST REVIEWS