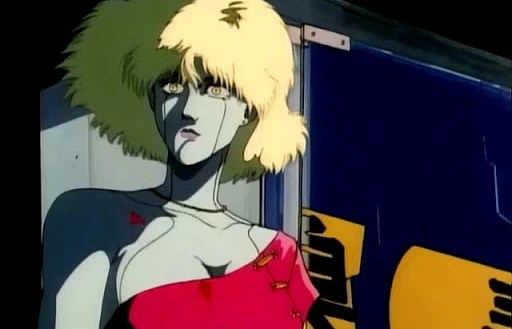 I must admit that I was very disappointed. The three episodes follow the life of AD Police rookie Leon McNichol and his exploits in the anti robot unit he is assigned to. The animation is quite poor quality as are the stories, which all tend to rip off other shows and movies (one of them is a total Robocop clone, in fact some of the scenes seem shot for shot rip offs.

The dubbing and music are not very impressive either. I was expecting a lot more than this from a spin off of BGC, instead it is just an excuse to get some tits out and show lots of people dying in several different ways. The stories try to look at the problem of mechanisation, the age-old problem of 'if we make intelligent machines what does it mean to be human etc, but largely fails.

Amendment
Since this review was originally written, you can at least buy all 3 episodes on one tape (a cynical marketing ploy or kind gesture? You decide...). So there is, at least, some value for money here - its the sort of tape that plays to Manga's old image, rather than the "World Cinema" distributor it now evidently sees itself as.

Its true that AD Police is really a spin off in location rather than spirit, but it did fit in well with the rest of Manga's Cyberpunk collection. Personally I don't think much of it either, but the target audience of boozed up clubbers will probably enjoy it.