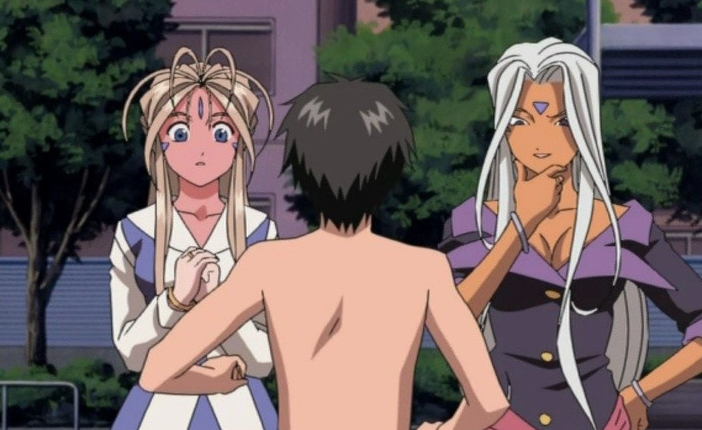 I promised several good friends of mine that I would give this show a chance. The two, who shall remain un-named for fear of retribution are perhaps the two biggest Ah My goddess (AMG) fans I have ever encountered and are probably at the level where they would consider world domination in the name of Belldandy. (Main Goddess character for those who don't know- Ed)

AMG is not new to the anime world. A highly successful manga has been produced for many years now with the numbers of volumes exceeding the magical 20 number, a highly successful OAV and an OAV based movie. This review covers the first volume of the new animated TV series which is based upon the storylines presented within the manga.

The story begins with Keiichi Morisato, a short, unlucky, unconfident and caring young man. Basically, the typical anime male and the kind that everyone takes advantage of.
However, this is not all his fault, as it becomes evident that he has the light of an unlucky star above his head, and on a night where he is tasked to do the chores of his seniors he makes a call for some Pizza, but rather than reach an Italian eaterie, he hears an angelic voice... "Hello, Goddess Help Line"...

From here, his fortunes tend to get worse as the goddess Belldandy enters his life, and thanks to a badly timed bout of disbelief and a foolish wish, it's going to be forever. Whoops.

With this stunning lady in his life Keiichi has to deal with being evicted from his former dorm room, a change of luck, the effects of the binding wish and the Ultimate System Force which prevents Belldandy and him from seperation. All of this leads to the kind of situations we are used to in these styles of anime; the growing love of a weak man for a stunning lady in his life, which includes the normal cliché of the first date and  the run-of-the-mill high-school comedy involving his classmates and friends.

Although the series will undoubtedly suffer from the effect of being predictable due to its genre, the show continues to feel fresh. So far the story is keeping things relatively simple with only a few central characters making Keiichi's life hell.

Volume 1 serves its purpose well for setting the scene of the series by introducing characters who you honestly care about. Surprisingly, I'd happiliy sit through another 11 volumes of this!

The art style through the show is crisp and clean, with lots of care placed onto the character design and the little details within the show. I personally love the effects and the effort put into making Belldandy seem as angelic as she is. As for the English dub, I know my two friends are for subs only, but I thoroughly enjoyed the effort put into the English voice acting. The emotion in the scenes didn’t seem forced at any point during the first 2 hours.

Overall my opinion of the show is very high, and although I am not at the point where I want to grab a copy of the OVA just to experience more of the show, I am thoroughly enjoying it. The effect of the show on my stressed self was quite pleasant as I felt utterly relaxed and amused afterwards. Very few shows manage to do that for me... Perhaps I should consider this a part of my daily relaxation routine...?