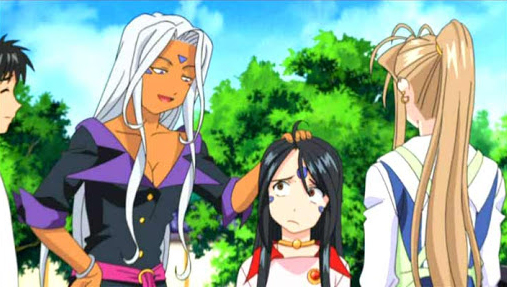 Although Ah! My goddess provides me with some truly mixed happy feelings, most along the lines of “Why do I feel like such a girl enjoying this?”, the series seems to gain momentum as it enters the realm of continuous episodes with recurring plotlines. Admittedly, these plotlines are rather short and fast moving but they do provide that little bit of additional depth which i crave from a good anime show.

Volume three finally has everyone together and into their well defined roles in the family structure. Skuld is clearly the brains of the operation and using her amazing technical skills she creates a multitude of fully functional robots to assist in protecting the unit from the barely threatening attacks from the demon, Mara. Unfortunately, her character suffers from extreme bouts of jealousy and immaturity, but hey, she is young and female after all! Urd has clearly adapted to her position of an attractive couch potato who causes considerable amount of conflict between, well, pretty much everyone and just happens to be my favourite character. First person to suggest it’s her cleavage gets shot, because for once it isn’t... mostly because Skuld grows bigger ones in volume 6! Belldandy seems to finally get a grasp of her relationship and Keiichi finally grows a pair... and then loses them again thanks to Urd.

So what can you expect from the final three volumes of the series? Well... here is a rundown:
• Keiichi loses his manhood, literally.
• Skuld hits puberty and discovers some feelings which she didn’t know she had.
• Belldandy turns into a love starved harlet (woo!).
• Urd falls in love with a junior high school student and loses her best assets.
• Belldandy kicks some major ass on an almost biblical scale which involves lots of angelic love and a new chapter in the war between heaven and hell.

There is a lot of other stuff going on, but these are perhaps the best bits and I find myself regularly switching between fits of comedic laughter and moments where I just want to go “awww”. Its pretty safe to say that if you have liked what you've seen so far, then you should just go grab some more beer and keep going.

The final thing to clear up is the finale. There isn’t one. After this first TV series, you have a second which follows on exactly where the first left off. We have pretty much more of the same from what I have seen so far, with just a couple more added twists. Its safe to say that when you have a winning formula, why bother changing it? It worked for Tenchi and Love Hina after all. (Not sure I agree with you on Tenchi - Ed)

Bring on the UK release of the second season!

8
More of the same, pleasant, but formulaic.
COMMENT AND DISCUSS
blog comments powered by Disqus