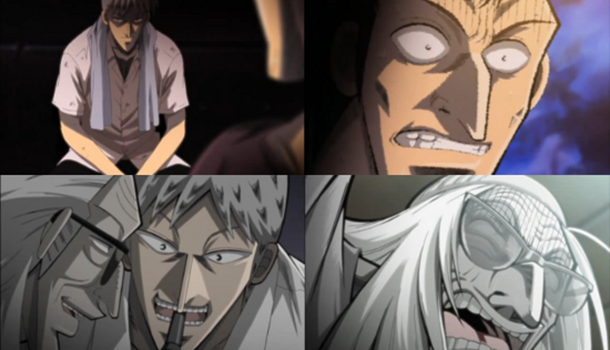 Shameful admission: This review has been sat on my Google Drive for over 2 years waiting for that “final edit pass” it needed. After going back and watching Akagi (again) over New Years I decided to give it that very thing and let it out into the wide world.

Akagi follows the misadventures of Akagi Shigeru, a thoroughly unpleasant and nihilistic young man who has a prodigal talent for Mahjong. After stumbling into a betting parlour on a stormy night, he comes to the aid of a hapless mook who is trying (and failing) to clear his debts in a game of mahjong with the loansharks he is indebted to. Akagi, for entirely selfish reasons, steps in and wins the game handily - much to the shock of the gangsters present as the young man had never played a hand of mahjong before that night. The men he saved then introduce Akagi to a series of more and more difficult opponents - something he is happy to go along with as he seeks out the primal life-or-death thrill that he can only find in gambling.

First off - you do not need to understand mahjong to watch Akagi. While the series does provide a very brief explanation of game mechanics, these are merely set up to help you experience the drama that unfolds. The show manages to tread a very careful line between under and over-explaining for its entirety and manages to pull it off in the majority.

I have been told by friends who do understand mahjong that the show is actually harder to watch for them as the cast (especially Akagi) tend to break a lot of cardinal rules of the game that you would need to follow if you want to actually win and this drives them positively bonkers. It does make for very engrossing TV though, and the majority of the entertainment in the show doesn't come from the mechanics or scoring on display, but simply the dramatic irony of knowing what each player has, who is bluffing, seeing opponent reactions, and critically seeing the reactions of the onlookers as they fumble around trying to comprehend the flow of the game that is playing out in front of them. The show makes great use of a narrator to raise the tension up yet further, interjecting to provide its own angle on events, to scold a character for not believing the gravity of shenanigans currently on display, or to throw in a over-the-top metaphor to encapsulate the game as it stands. The main joy isn’t in seeing the game of mahjong itself, but in all the mind games that play on everyone present - everyone, seemingly, but Akagi himself.

The series is very faithfully adapted from the original manga by Nobuyuki Fukumoto, and retains its signature style in doing so which means you get a lot of damn ugly characters with huge pointy noses and not a female in sight. This style honestly works quite well for the series as once you get over how repugnant people look you will find a breadth of expression present. The visuals, while not amazing by any metric, are tuned to be highly expressive, dragging you into the action and the intensity of the moment with a well-combined use of CG (mostly for the mahjong tiles themselves) and normal animation. Where the series really shines in the visuals is when the show allows the rising tension to break into the scene, warping people and the environment in a gripping way.

The music in Akagi is amazing, driving home the atmosphere of the series and perfectly engineered to send chills down your spine. The composer would later go on to score another anime based on Fukumoto’s manga, Kaiji, where he elevates his ability to yet higher levels.

The only issue with Akagi is the pacing of the series. It works great in the micro level - the moment to moment - but falls apart on the larger scale. While the first half of the show rapidly burns through a set of interesting opponents with great, if somewhat accelerated, pacing, the entire second half is dedicated to a ponderous match against a single opponent. It even introduces a keenly interesting rival for Akagi but then sidelines him just before the expected confrontation in favour of a different opponent with zero fanfare. This bait and switch takes a lot of the wind out the show just as it is monopolising your attention. This final opponent is initially hyped up as a godlike presence, and they do have the cajones to back it up, but due to the intense stakes attached to the match the tension is somewhat deflated. Due to the handicaps in place Akagi cannot actually be allowed to lose as even small setbacks would lead to his outright loss. This final match hasn’t even ended yet in the manga despite it running since 1992 - one piece of scuttlebutt being that the continuation of this manga is keeping the magazine it runs in afloat, and so it cannot be allowed to finish. This anime doesn’t attempt to resolve the final match either, and arguably this isn’t very important in the grand scheme - as mentioned before the main joy of the series is watching the mind games on display as the opponents try and mentally dismantle each other, which it does still deliver in spades.

Akagi is a great show. It’s tense, brash, over-the-top and utterly enthralling.  Despite (and perhaps because of, it could be argued) knowing nothing about mahjong the series forcibly drags you into its bizarre world of mind games and gambling hijinks and refuses to let you go.

Akagi is currently available in streaming form via Crunchyroll.

Japanese audio with English subtitles.  Video is available in 360p and 480p resolutions.