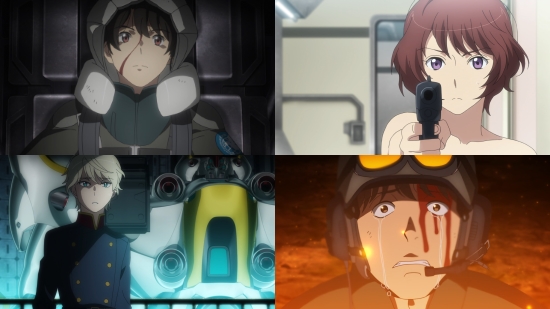 My colleague Dan's closing impressions of the first four episodes of Aldnoah Zero effectively boiled down to "great action, disappointing story" - a take that I'd broadly agree with as the show's early running struggled to setup its setting and narrative via clumsy exposition dumps which tempered its undeniably compelling sense of spectacle.

With that setup out of the way, Aldnoah Zero can settle down to the meat of its conflict between Martians and Earth (or Terrans, as the inhabitants of Mars would rather call them), with the personality-free Inaho effectively leading us on this particular adventure as it becomes increasingly clear that the entire conflict has been manufactured by a Martian faction hell-bent upon taking the Earth and its resources for themselves even if it means sacrificing a member of their own planet's royal family into the bargain.

In spite of this, it still seems like the only hope to end the bloodshed is for Martian princess Asseylum to get in contact with her homeland to prove that this war is being carried out under false pretences - a seemingly noble and brave decision, but one that could prove fruitless as we begin to see how deep the rabbit hole goes. Even Slaine, Mars' resident (and much put-upon) Earthling, has some difficult decisions to make as his allegiances are put to the test ever-more sternly.

So, there's certainly a lot going on within the world of Aldnoah Zero - war, politics, and human drama by the mech-load - but funnily enough it's in terms of story that the series suffers the most. Much of this seems to come from a constant desire to up the ante each and every episode, leaving every episode leaving on an almighty cliff-hanger which the show more often than not needs to backpedal from the next week simply to keep its narrative working over the requisite twelve episodes. The result is a decidedly messy one, with the lines of conflict redrawn almost literally every minute at times, while characters are put through the wringer so often that the impact of the decisions foist upon them is lessened considerably.

Not that these characters manage to maintain any kind of internal consistency - Slaine's place as a literal Martian whipping boy isn't an innately bad narrative decision, but by the end of the show the one character who seemed to have the strongest singular reason for his existence and motivations is veering wildly all over the place like a drunken lunatic. Even Inaho, the paragon of boring pragmatism, ends the series with a massive character shift that is completely unbelievable, all in the name of shifting the story where the writers wanted it to go for its big finale... which is, of course, a massive cliff-hanger for season two come January 2015.

In that sense, Aldnoah Zero is a prime example of how not to write a story - this is a tale where the plot's inflection points drive the actions of the characters, where it should be the exact opposite. Had this series started with its characters and built up a story around them, we could have been talking about Aldnoah Zero as one of the year's best anime, but as it is much of its great concept and setting is all but wrecked by an almost desperate attempt to fill the show with cool set pieces.

Then again, all of those set pieces sure are fantastic - the show's excellent visuals, the setup of its big moments (which come thick and fast in each and every episode) and the accompanying bombastic soundtrack from Sawano Hiroyuki create an incredible package that is utterly compelling to watch provided you aren't thinking about the events unfolding too much. In that sense, this is anime as event television - for all of its flaws, each episode left me rushing to social media or excitedly keeping my counsel for the next UK Anime podcast show so that I could pick apart all of its big moments and excitedly chew over its latest big cliff-hanger. It'll be genuinely fascinating to see how (or if) the week by week momentum of Aldnoah Zero will translate to a future home video release, as watching this series en masse may well strip it of some of its greatest strengths.

As a result, I'm utterly torn in terms of my overall opinion of Aldnoah Zero's first series. It's deeply, deeply flawed - I know it is, and it isn't even difficult to identify the gaping holes in what it tries to do. Yet, whenever I cast my mind back to watching each episode, all I can remember is the exhilaration of actually watching the series - cranking up my AV receiver, shutting out everything else and drinking in the heart-pounding drama and tension of it all. On that pure, hedonistic level, few series can surpass the impact of this show.

Ultimately, it boils down to this - if you want watching an anime series to be an "experience", then Aldnoah Zero delivers in spades provided you can live with its narrative foibles. If, however, you're looking for a considered and well-plotted narrative, no amount of cool action or memorable moments will make up for a story that stumbles over its own inconsistencies to an infuriating degree. The dissonance between its presentation and the results is so great that, even having written this closing paragraph, I don't know how to score it - what you read below might literally be the result of me flipping a coin between a 6 and 7 score on our rating scale.

6
Aldnoah Zero is superb spectacle but shoddy story-telling - your view on the series will depend entirely upon which of those two facets you consider more important.
COMMENT AND DISCUSS
blog comments powered by Disqus