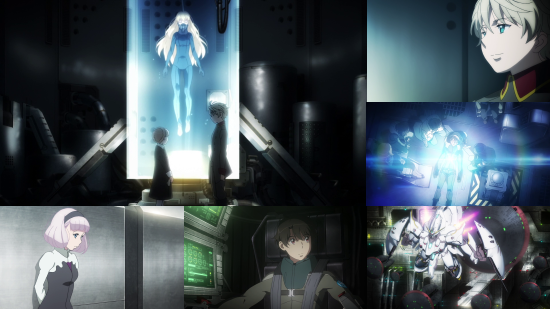 Aldnoah Zero was one of those series last year that we all loved to mock and berate, but one that we secretly watched under the covers just to see what utterly inane idea the writers could come up with next, or whether Inaho would finally develop a facial expression. This series provided our podcast with the kind of fodder that makes broadcasting a joy, and when last season’s cliffhanger struck (where Inaho and the princess were both shot, presumed dead) the Internet was awash with talk of an inevitable plot twist when the series continued this winter.

That twist was that both Inaho and the princess would survive. None of us bet against this outcome because none of us were, frankly, stupid, and based on the previous twelve episodes writing it was inevitable.

Because of this I state the following not as a spoiler, but as a dramatic certainty. Both of them survived the point-blank shots from Slaine and Count Saazbaam’s pistols, albeit with a fair amount of collateral damage. Inaho is now more computerised than ever -  we thought he was an emotionless cyborg before, but now some smart-arse in the UE requisition department decided to plonk a damn computer in his brain and a cyborg eye, the latter of which is admittedly kinda cool. The princess however, is instead doing a rather good impression of a comatose goldfish in the Martian “moon” base. (I say moonbase in inverted commas as actually it’s a fragment of the moon, in the same orbit as the rest of the moon debris)

So how does the magnificence of the writing team aim to deliver this swift change in plot? Well, by skipping ahead into the future. At the end of the first series, United Earth were almost defeated, their Aldnoah powered battleship driven to the cold of Siberia with the forces of Vers raining down hell and orbital fortresses upon them. Okay, so they weren’t wholly defeated, but you’d think that once the princess had passed on (or at least her activation ability was) the end was nigh. Nope! By the miracle of Inaho, the battle was not entirely lost and the fight has now been taken to orbit. United Earth has established a base in orbit, manned with hundreds of people (because it’s extremely easy to house hundreds of people in orbit in a few months, especially in a time of war and subjugation) and they have taken the battle back to the Orbital Knights and Vers. Slaine is still hanging around, except this time he finally has his own Aldnoah-powered mech and is kicking bottom as only the nemesis of Inaho would... and this time he is only a little bit traitorous.

Has Aldnoah Zero gotten more intelligent? No. Has it suddenly improved in terms of writing quality and plot pacing? No. Have the production staff delivered new WTF moments and nonsensical additions to the plot? Oh yes. They have taken what they learnt from the first series, written it down, thrown it in the bin, and have continued on as before.

Thus, it maintains a delicious status quo which continues to make Aldnoah Zero my guilty pleasure. I await with trepidation to find out if the goldfish princess wakes up. I want to find out if Slain continues his quest for domination and tries to stab every elitist Martian who comes his way. But, most of all, I want to know if Inaho will smile. That would be nice.

I will admit this though - you thought you had seen some feats of tactical and strategic genius in the first series, and you have seen nothing yet. What Slain does in the third episode made me weep with glee for the utter evilness of the move.

A lot was said during our look at the first series about the quality of the animation and the music production both being very good - well, nothing has changed in that department. The mecha are still extremely cool, the fights are still crazy, and the music is very well produced.

It goes without saying really that if you haven’t seen Aldnoah Zero's first season, then you really should before you start with series two. If, like me, you are diving into more Aldnoah Zero... well, grab a beer and enjoy the stupidity with a jolly big smile on your face. You know, that thing that Inaho just can’t do...

7
More of this big, dumb, guilty pleasure of a mecha series.