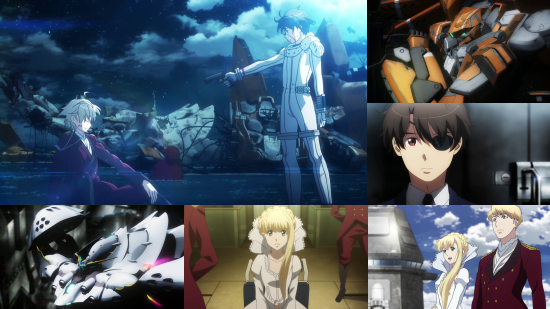 It either says a lot for my taste in anime, or for the state of my weekends, when the first thought I have (after the urge to pee) is to watch the new episode of Aldnoah Zero. I am sure if I had better distractions in my life, this wouldn’t be the case, but oh well, this is where I am. Now I am sad, as my weekly dose of dumb space fights and drama has finished.

Also, consider this a spoiler warning. Although I don’t go into that much detail, I do have to at least cover some major plot points to discuss the series. If you don’t want spoilers, then please skip to the bottom of the page and the final sentence.

So, after the first season, and a rather explosive start to the second, what have we learned and what did this second season actually deliver? Did Inaho finally get a personality? Did Slaine finally manage to get his end away with Lemrina or, heaven forbid, the comatose Asseylum? Have the United Earth Forces been crushed under the overwhelming power of Vers and Aldnoah?

The answer to all of these questions is a resounding no.

The one thing that shouldn’t be expected from the remainder of series two is for the show to suddenly gain a clarity and direction in its writing. It doesn’t happen. What does happen is that the fight between Earth and Vers continues, Slaine manages to slaughter his way to control of the Orbital Knights and plots the downfall of Earth by marrying his way into the royal family. On Earth, Inaho does more inexplicable things using his robotic eye, which manages to become self-aware and gains a personality which is actually less robotic than Inaho.

Asseylum obviously wakes up, as that was hinted at in episode two, and thanks to her awakening she puts a stop to Slaine’s plans for domination by proclaiming peace and co-operation with Earth as she marries her way into becoming the all-powerful Empress of Vers. All this happens while the big almighty battleship of Earth basically gets relegated into nothing more than a carrier craft for the on-going battles in Earth orbit (although it does do a rather impressive gerwalk mode as it transforms Macross-esque from being just a ship with pew-pew cannons into a mecha-slinging beast of a ship. Admittedly, I might have had to adjust myself a little when this happened). All this, combined with the ongoing subterfuge between the various Orbital Knights, more high-school drama on the Deucalion and such a wide array of inexplicable dialogue that you could probably host a good session of Prime Minister’s Questions using clips from Aldnoah Zero. Or, maybe replace bits of the Aldnoah Zero dialogue with sound bites from The Room. There would be many places for “Oh, hi Mark” to fit in here...

What I intend to say is that the series has not lost a single bit of the charm which has kept me glued to my screen every time I saw that a new episode was available. Yes, it is badly written. Yes, it is badly paced and lord yes, does Inaho find the most fabulous ways of getting out of sticky situations against these Aldnoah-powered mecha thanks to the magic eye. But this is what makes the series fun. It tries to be oh-so intelligent, and I have to admit that these situations are awesome, if not over-reliant on smoke-screens or a little bit of “technology” to predict what your opponent is going to do next, but at the same time, it’s just dumb and badly planned.

I do wonder if the ending that occurs - the lasting peace and co-operation between Vers and Earth while Slaine is incarcerated, Magneto style - was actually planned out. I do still wonder why Slaine decided to set the moon base to self-destruct and why he made the decision at the end to fight it out, leaving his troop transports vulnerable. Plus, am I the only one who was disappointed not to hear Majel Rodenberry’s voice when the moon base self-destructed? The ending is a cop-out, plain and simple, especially when compared to the screen-shouting frustration that finished series one. I am frankly uncertain now as to how (and if) they are planning to continue the series, though I can see a hashed-up storyline involving forces on Earth, with Asseylum and the leftover loyal Orbital Knights, fighting against a new invasion from Mars using those survivors from the Moon Base. It’s going to happen, just you watch. Though I somehow doubt that Inaho’s eye-patch will hang around for long.

I am going to repeat something I have said many times before. Aldnoah Zero is one of those shows that doesn’t promise the Earth (or Mars, or the Moon) but you can tell that they are trying so hard. The animation - well at least the space battles - is still top notch and the acting is excellent in spite of the horrors of the dialogue and story. But so what? It's entertainment. If I wanted true quality for space fights and storylines, I would dive back into the works of Macross, Space Battleship Yamato or maybe even Outlaw Star. (I am not going to mention Gundam, as I honestly think Aldnoah Zero is better than most Gundam series, but that is a fight for another day!)

But that is not what Aldnoah Zero is about. This series is all about pure, mindless entertainment, to be enjoyed when your mind is too tired, or more commonly in my case hungover, to enjoy anything better. I love it and I honestly hope we get more.

7
Enjoyable, mindless entertainment, although I wanted the Deucalion to have a Macross Cannon...