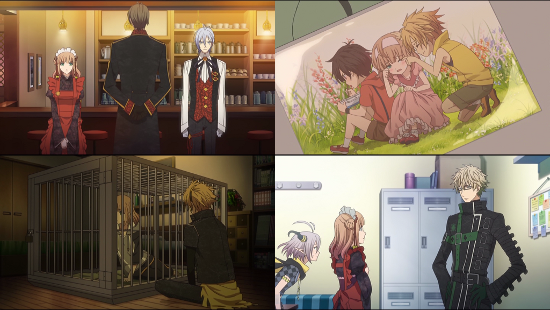 Amnesia follows the travails of a normal, air-headed girl who has (as you may expect from the title) lost her memories. She manages to figure out that she is a university student and works at a plush-looking maid cafe before being whisked away on a work trip to a resort for team building. Goaded by a mysterious floating companion called Orion, she tries to piece together what happened to rob her of her memories, and seeks to uncover them.

Amnesia is an adaptation of a romantic visual novel aimed at women (an otome game, if you wish to use the parlance) and follows the structure of its source material exactly... to its utter detriment. After a ham-fisted introduction to the cast and setup, the show moves into a series of five individual storylines, each one focussing on a different member of the male cast as the heroine tries to piece together her memories and figure out what is going on around her. There is no real effort to adapt the material to the anime format or otherwise flesh it out, giving you a very dry and unyielding viewing experience.

There is a hint of a potentially interesting meta-narrative here, but the series bungles the handling of this in a hurry to get through the different characters routes, instead electing to explain it in a series of a plot exposition dumps in the final episode that are both unsatisfying and incomplete. This is something the series does in spades - clunkily throwing events on the screen with zero pre-amble and telling you everything upfront in dry dialogue where people simply lay things out as opposed to having a real discussion about them. Instead of telling a story, you are instead forced to behold a set of things that just are, with zero engagement welcome or possible. It’s terminally boring, particularly during the introduction as it clumsily sets things up only to shift them immediately afterwards.

Having its roots in a visual novel, the main character of Amnesia is a blank self-insert character, even going so far as to forego giving her a name or any personality at all! She is the ultimate wet blanket, being utterly permissive and facile at all times to the point of not even going with the flow but instead letting events occur around her. She easily accepts horrible acts that are visited upon her, has zero personality or notable aspects and is frankly infuriating to watch as she merely exists her way through the series. You begin to wonder why the heroine has five dudes within her grasp, but then you learn that they aren’t much better.

What little agency she does exhibit in the series she is immediately robbed of due to the Deus Ex Machina character, Orion. Orion is a Fairy who only the main character can see and talk to (no, really), and who exists to reiterate plot points and to drain all the tension out of scenes by very flatly stating (in a grating voice) what had just transpired in case it went over your head. While watching the show I threw my notepad several times because a plot development that was slightly interesting was immediately nipped in the bud by having Orion turn up, explain it exhaustively, and then harangue the heroine into maybe, perhaps, just this time doing something about it. He even has a habit of vanishing just as he is about impart something useful to the heroine, something so corny that I found myself barking out a laugh instead of feeling any tension.

Given that it's based on dating game, and especially one where the main character is a nothing, you would expect that the various male characters would be the draw here. Sadly, all of them are either outright assholes or have massive overriding personality defects. You have the rebellious child; the narcissist who had his own fan club and a whole truckload of bad rumours surrounding him; the smart one who has zero social skills; the possessive abuser; and an actual murderer. In each storyline the heroine is in a weak romantic relationship with one of the boys and they crash their personal issues and woes against her until you get some kind of resolution to their storyline, at which point things start over again with someone else. At no point does any of it feel romantic or desirable in the slightest.

As previously mentioned, the heroine is utterly permissive and accepting of everything that happens to her to the point of deadly naivety. She gets frequently bullied by a squad of faceless beret-wearing girls and even her actual love interest at the time, including at one point being drugged with sleeping pills and when that stops working is outright kidnapped and shoved into a cage! The worst part of this is how the heroine rationalises it away as a sign of affection and something she has “driven” her supposed boyfriend to. Gross.

The “best” boyfriend is the socially oblivious Kento, who is around 8 feet tall and whose outfit is made entirely of belts - While a bit of a prat Kento actually assists in helping to figure out the overarching plotline of the series and makes an effort at creating a healthy relationship before he is unceremoniously shuffled out for another arc to take place.

The visuals in Amnesia place their care and attention on the characters, as you may expect for a series that leans so hard on them. Despite the main cast having highly detailed (and in one particular case belt-tacular) outfits they are always on model, even down to the smallest details. Of course, this doesn't help the slight uncanny effect from having the main cast all in matching overly-designed outfits next to background characters wearing normal garb. They also stand out from the backgrounds, the majority of which are obvious photographs that have then had an image filter applied to make them indistinct and have the colours separated out. The soundtrack is made up of instantly forgettable tinkly tunes that befit a visual novel - there’s a slight musicbox motif but that is about it. Finally,the opening and ending themes are terrible and I skipped them every time.

Amnesia is not a good show. The series is so cack-handed both in content and execution that any good ideas that may lie within are utterly drowned out by the sheer weight of mediocrity on display in the show - that and the bizarre abuse that is heaped onto the doormat of a main character, which is intensely unpleasant to watch. Don’t waste your time with this.