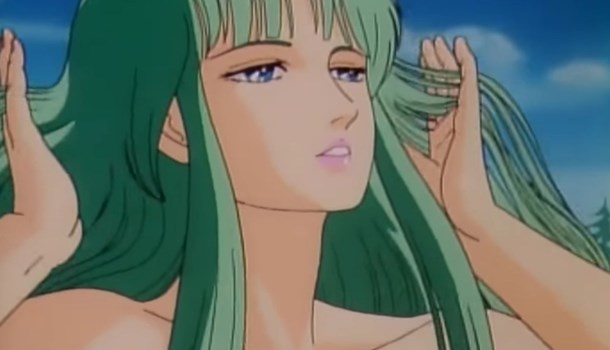 Amon Saga is one of those films I want to hate. It has a thin plot, a typically fairy-tale action movie set of characters and has nothing that makes it truly spectacular, and despite having more features than it's fellow "Manga: The Collection"(a budget line of DVDs from Manga Entertainment) members, it was still similarly priced and so expectations weren't high.

Alone, after the death of his mother, vowed to get revenge on the people who killed her by training to be a master swordsman. It's around here that you'll find you have heard this a million times before, only this time it has a twist. After sneaking into his enemy's territory, he soon comes across a beautiful princess, and as a s sort of side adventure, he goes ahead and saves her. It is as if the film makers took the simple, overdone plots of beneath the action film and the fairy tale, and produced something far more enjoyable than what both genres could ever hope of doing on there own. Alone and the rest of the cast are hardly unique or special in any way, but thanks to some great character design and some good script writing, they seem to somehow become more human and less forgettable than the usual stereotypes.

As the story begins, you are immediately dropped in the action, and while it may give off a bad impression to most, it helps viewers predict what's to come. The action scenes are exciting to say the least, and are definitely on par with the likes of Shadow Skill, everything is as fast paced and furious as the likes of Street Fighter Alpha, and because of Amon's superb sword skills, it's the true gem of the film. Despite the fact that this film was originally produced more than a decade ago, the animation is still as fluid as it ever was, and stands high above the usual OAV standards. The character designs, too, can't be faulted and you can see Yoshitaka Amano's influence shining through, with the essence of Vampire Hunter D being immediately noticeable, so fans of that should feel right at home. Backgrounds, though hardly beautiful, get the image of Alone Saga's world through nicely, keeping in the tradition of Fist of the North Star's barren wastelands.

The dub, while not one of the worst I've heard, is often too much like an American Saturday morning cartoon for my liking, and the emotionless drones of the enemies can soon become little more than an annoyance. Thankfully, Man have decided to include the original Japanese audio track, so purists or those who simply can't stand the bad dubbing can view this with pleasure.

I'll admit that I have a soft-spot for this one, and it's hardly going to convince anime nonbelievers, but it does represent one of the best films of it's genre, animated or otherwise. Not spectacular, but enough to keep action fans occupied and gets the balance between action and dialogue just about right to warrant this a good purchase.
7
For those of you who want a healthy dose of action-filled adventure, this is an anime very worthy of your collection, and at £9.99, it's great value for money!
LATEST REVIEWS