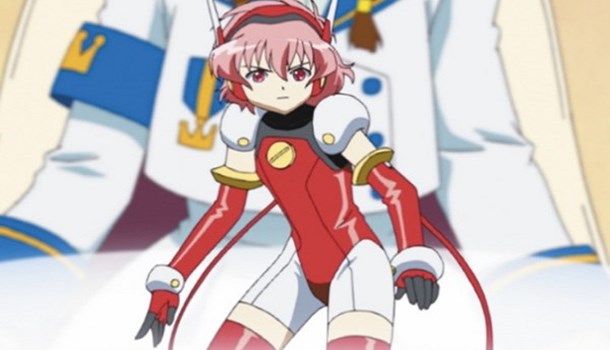 First airing back in 2001 and having been previously released on DVD by ADV Films; Angelic Layer has seen a license rescue and re-release by Sentai Filmworks and Anime Limited. The series follows Misaki Suzuhara a young girl around 12 or 13 years old who has just moved to Tokyo in order to live with her Aunt and attend a new middle school. On the way to her Aunt's home; Misaki stops and watches an outdoor TV showing a fight between two dolls that are able to move through the thoughts of their owners. This game is called Angelic Layer and is sweeping the country by storm as each player of the game has their own doll that they can customise the look and fighting style of. Misaki meets a very eccentric man in a lab coat (No it's not Hououin Kyoma from Steins;Gate) who helps her buy her first “Angel” and the accessories to go with it. Misaki wastes no time in setting up her angel and giving it the name “Hikaru” in order to play against other players and enter into the Angelic Layer Tournament scene. Tied into this is the sub-plot of Misaki's mother moving to Tokyo and not seeing Misaki in over seven years as she's “busy with her work” but little does Misaki know, her mother is closer than she thinks.

Angelic Layer in essence is a twenty six episode tournament arc battle series revolving around children fighting against each other with dolls that follows Misaki's rise from complete novice to seasoned pro over the space of three tournaments. The qualifiers, regional and national tournaments. Along the way we are introduced to different characters who have their own philosophy about how best to play the game and what victory means for them. Each character and their angel are distinct enough for the viewer to get invested in their own individual story and motivation for playing the game. This in turn ties into Misaki's philosophy which in its simplest terms is just she wants to play the game and have fun doing it. With her facing so many serious opponents of the game they soon warm to her and her way of thinking when it comes to competition and sportsmanship.

This in turn makes Misaki a very likable protagonist. She hardly shows any angst outside of a few scenes where she experiences a loss and is frustrated at her lack of skill and experience. But overall she keeps a positive attitude and simply has a love and respect for the game. Which in turn is still refreshing to see. So many anime like this that feature on a sport either has characters that disrespect their opponents by acting arrogant or taking things too seriously as there is something important hinging on them winning the game. Here Misaki just wants to win because if she wins she can keep playing in the tournament and play against string opponents that will help her learn more about the game. This aspect is so ingrained in the show that all of Misaki's opponents end up becoming her friends who then cheer her on, give her advice and even compliment her on how well she is doing for someone whose fairly new to the game.

From this most of the story, conversations and action takes place on the Layer, the board on which angels fight each other. The series does take the occasional break from these moments to deliver some school yard shenanigans. This is where the show is at it's weakest and is a reminder that the show at this point is seventeen years old. As one episode focuses on sexism in the form of one of Misaki's classmates challenging her to a game of Angelic Layer to prove he is better than her solely on the fact he is a boy and she is a girl. Completely ignoring the fact at this point in the show Misaki has qualified for the regional tournament and held her own against strong opponents. A fact that Misaki somehow forgets with her being extremely nervous playing against a boy and doubting her own abilities. The saving grace is that in the end things resolve as they usually do in these plots with the offender apologising and changing their mind about their previous standpoint.

Also thrown into the mix is romance sub-plots between a few of the characters and a sub-plot involving the angelic layer creators using the data for medical research. This is where the show tries to throw in some comedic moments with the creator of Angelic Layer forcing one of his subordinates to participate in unusual and bizarre punishment games all for the sake of comedy (Well, he is very eccentric - just think about where he put Chii's on/off switch - Ed). Another facet of the show that hasn't aged all that well as the harassment aspect of this running gag and designating one character as the butt-monkey is really an overplayed trope now. However in this sub-plot there are some interesting moments between these characters as we learn the reason for Angelic Layer's creation and their noble end goal with developing the game and gathering the data they need. Also we see glimpses of Misaki's mother which adds the theme of parental abandonment into things. Showing Misaki's mother regret over the situation at hand but working hard in order to finish what she set out to do before she can see Misaki again. This all loops around nicely to tie into the Angelic Layer tournament.

Speaking of which the tournament in question offers some rather fun action scenes with dolls first fighting each other on flat planes that then become big stages with set pieces that become more elaborate as the show progresses. This in turn leads to some rather fights that still look rather good on the blu-ray. The show itself has consistent art that I only noticed going off model a few times near the end. The transfer on the blu-ray is also very clean. The audio has the original ADV dub and Japanese audio both in stereo. Both are watchable but the ADV dub really shows how dubbing has progressed since then with a few mispronunciations of character names (One instance has a character named Kaede who I thought was called Katie as the characters kept saying that) odd inflections and timing on some of their words to match mouth flaps. There a re a few issues here sure but each characters voice suits and there is an earnest charm to this dub. Still a fun way to watch the show.

Overall Angelic Layer when it focuses on it's battle and tournament aspect still holds up really well. There are fun characters, dynamic fights and a good narrative that ends with a satisfying conclusion. What lets it down slightly are the aspects that show its age and being a product of its time with regards to sub-plots and comedy. But if you can appreciate this aspect or look past it, Angelic Layer still offers a great watch presented in a nice package.