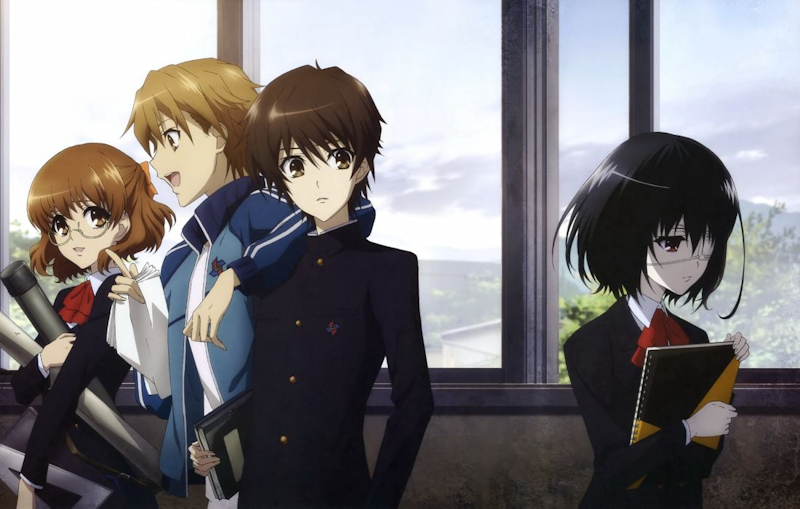 The definition of what is scary, what is gory and what terrifies varies immeasurably from person to person. There are people among us who loathe the sight of blood or supernatural horror, while being inexplicably drawn to a good story with a horror twist. Similarly there are those of us who just like a good gore fest devoid of any substance - there must be quite a lot of us who fit this description as this is basically what a large proportion of the global film market churns out year after year.

If I was to describe Another in a single sentence, it would not be as a pronoun, but it also wouldn’t be as a horror series - horror for me isn’t transparent and easy to predict. Instead, Another is a supernatural thriller that specialises in killing the vast proportion of the cast using increasingly gory means.

Another is the story of a curse, and those poor students in the class afflicted by it. Twenty-six years ago, an event - or rather, the fallout from it - caused a curse to be created.  A curse which can manipulate memories and cause fatal calamities to all in Year 9 Class 3 and their families throughout the decades. With a death toll in the hundreds, no-one was unaffected by the curse. When transfer student Kouichi joins Class 3 half way through the school year he finds himself the centre of attention for the wrong reasons as the curse only becomes active when there are too many people in the class. From this point onwards, deaths are inevitable and the only defence is to completely ostracise and remove someone from the class to return the balance seemingly desired by the curse. This time around it's Mei Misaki’s turn to be the "hidden" class member. No one looks at her, responds to her or even acknowledges her existence. So much so that when Kouichi first meets the mysterious eye-patch-wearing Mei, he has suspicions that she isn’t entirely… there.

It is Kouichi’s fascination with Mei, her story and her whole-ness which lands him in trouble as the first deaths begin and the curse, or the Calamity as Class 3 refer to it, intensifies. Kouichi’s only escape now is to solve the riddle of the curse and find a way to appease the spirits, or be destined to end up a bloodied corpse.

Another is a story focused on death. It is gory, pulls no punches with killing children and is at times absolutely hilarious in the way the writers found means to extinguish the lives of the members of Class 3. In fact, it is these methods which change Another from being just another predictable school drama show, admittedly with a bit of a twist, into something that is substantially more interesting. Case in point: in the first few episodes, as the plot is beginning to work itself out and the characters are introduced, there is one specific character who I actually though was annoying. She was a whiny character, badly written if I have to be honest, and I thought she was going to become a love interest for Kouichi, competing against Mei and some of the other girls. She had just finished offering her umbrella to Kouichi in a romantic gesture. Cue predictable dullness. But instead, guess what happens?

Well, she dies, but that is not what is important here.  The devil is in the details of how she dies... an event which made my night.

Suddenly, a series which frankly felt like a bit of a chore after two episodes turned into a true Asian gore-fest. From whence previously there had been standoffishness between classmates, school politics and mysterious dolls, the series suddenly becomes occupied with the mass murder of the children of Class 3 and their families by increasingly elaborate means. To be quite honest I lost count of the show's death toll in the end, but I am sure that more people died than during the entirety of the Falklands Conflict. This revelation has lead me create the next in the long line of UK Anime Drinking Games. See below for details!

The pacing through the show's twelve episodes is rather spotty at times, as can be expected for series trying to cover so much in such a short length, and yet we still manage to have a beach episode. Half-way through the series, the pacing quickens as the body count rises leading to a crescendo of death and blood in the melee of the final episodes. It is definitely a series to watch when getting progressively more drunk!

The voice acting is one of the weaknesses of the series, with a rather flat performance on the English dub by many of the crew, while unfortunately the Japanese is not much better. What the series does do well is how it succeeds in creating an atmosphere. The music and the dramatic artwork assist to create a creepy and thrilling environment throughout the series which works excellently with the storyline. Although I think the series would be better served replacing the Ali Project opening and replacing it with Queen’s "Another One Bites the Dust"!  See what I did there?

Apart from the flat few episodes at the beginning, I actually thoroughly enjoyed Another. The convoluted story and details of the Calamity were hilariously offset with the death and mutilation. Yes I used the word hilarious and death in the same sentence. Honestly, I found myself actually laughing during a lot of these scenes as they were so over the top and over-dramatic that it was impossible not to laugh, at least for me. However, for those of you into your gory horror, Another is definitely one to watch as, at the very least, you will get a couple of good nights out of it. Another certainly isn’t written by Bram Stoker, but it entertains like a good Tarantino.

The Another Drinking Game

Starting at episode three, get yourself a large bottle of something strong. Preferably a good whisky or maybe a nice brandy. This game is focused around the killing of class members and their families, and the means this is achieved. You will need at least one other person to play, and you will get progressively more drunk as the game, and the series progresses.

This game is played like Cluedo. For each episode, as it continues, you have to make a guess as to how each character dies. Using the example in the article above. The way the narrative flows makes it evident which character is going to die with a sufficient notice to guess. Each guess takes the format below

Tatsuji, killed by being stabbed by an umbrella

English and Japanese stereo audio with English subtitles.  Extras consist of clean opening and closing credits, and an "omake" featurette with subtitles.