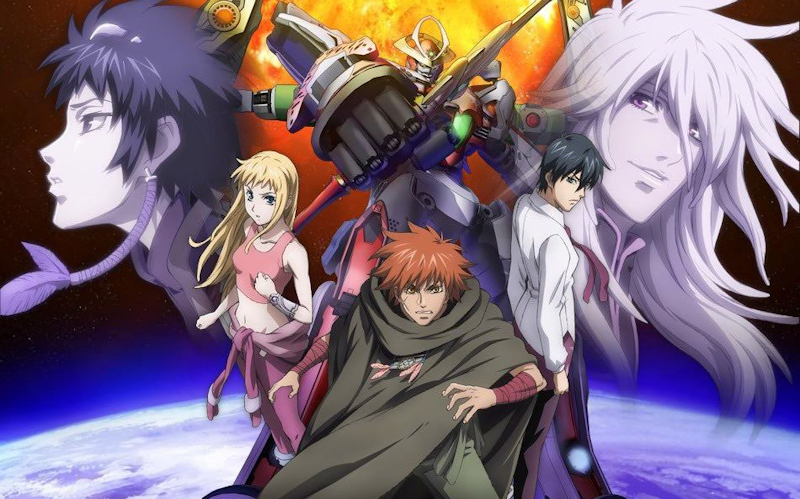 When the Earth is attacked by the Shadow Angels, humanity is decimated, leaving only pockets of resistance across a shattered world. One force exists to counter the threat: Mechanical Angel Aquarion. Piloted by unique individuals known as Elements, the Aquarion mech is made up of 3 component fighters that can combine in different ways to create a versatile fighting mecha. If humanity is to defeat the Shadow Angels, one element must rise and take a stand.

So it's basically Evangelion right?

Well, yes and no. Yes in so far as much of the premise is taken from Anno's classic series, but like Gun Sword is also borrows liberally from other series too. Gunbuster, Escaflowne and Dangaoih spring to mind, with the former providing the school backdrop for potential pilots (complete with mysterious trainer), and the latter two in terms of style for characters and mecha respectively.

The story runs at a decent enough pace, but these early episodes do feel like they're ticking off requirements from the "standard mech show ticksheet". You have an angsty main pilot, a bevvy of stereotyped female pilots (angry, busty, clutsy), a world in ruin, mysterious organisations and an enemy with a hidden agenda. But it's not so much the ingredients as what you cook with them that counts, and in this regard the show is pretty average.

One of the saving graces of the show is the characters themselves. The lead, Apollo, is a little feral and has attitude to spare, but stays just the right side of feisty without crossing into annoying. His relationship with blonde pilot Silvia (angry stereotype) is antogonistic at best, and is complicated by the fact that he may be the reincarnation of her lover from 12,000 years ago.

Don't worry, my head was spinning too.

The mecha design, by anime veteran Shoji Kawamori (Macross Frontier among many, many others) is passable. The numerous combination options for Aquarion were a little indistinct for my tastes, and while the animation is suitably crisp and dynamic, it never really achieved anything we haven't seen countless times before.

Where Gun Sword largely succeeded in stealing ideas from other shows, Aquarion is a little less successful. That's not to say the show is bad, and mech fans will no doubt enjoy the show for what it is, but with Gundam 00 and Code Geass on shelves this month, it could be easily overlooked. Time (and future volumes) will tell us if this is a heavyweight title, but fo rnow it's a solid entry into a bustling genre.

The extras do gain it one more point for sheer volume and quality though.

7
Standard and solid mech fare, but it faces stiff competition from other sources.
COMMENT AND DISCUSS
blog comments powered by Disqus