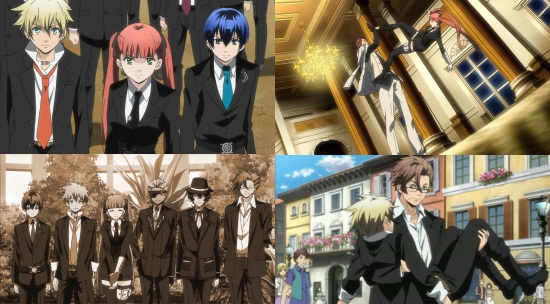 Following on from their release of Kamisama Kiss earlier this year, MVM Entertainment are now continuing with their line-up of anime releases targeting a primarily female audience with La Storia Della Arcana Famiglia. Rather than Kamisama Kiss' manga origins however, Arcana Famiglia is - much like the recent Hakuoki - based on a PSP "otome" game (basically a reverse harem, where one girl has to make choices to see which of a bevy of young men she will allow to romantically pursue her). It’s great to see MVM working to serve a portion of the market that doesn’t tend to get a lot of licensed releases over here and whilst (as with Kamisama Kiss) there are a lot of supernatural and comedic trappings around to give something back to the general audience, you have to tip your hat to a company that will take a gamble on these kinds of releases, although the big guns like Nana and Skip Beat remain barred from our shores likely due to high licensing costs and an presumed (and realistically, probably correctly so) smaller market for a straight-up romance series. So, let’s head off to Italy and see if MVM’s latest offering can help boost the popularity of this particular genre in the UK.

The Island of Regalo is our home for this tale, a formerly war-torn land now peaceful thank to the leadership of the Arcana Famiglia, presented here as a kind of good Mafia who look after the island. The Famiglia’s rule is assured thanks to select members of the family making contracts with a set of tarot cards called the Tarrocco which grant them supernatural abilities. Our heroine is Felicita, the daughter of the clan's leader ‘Papa’ Mondo. She’s made a contract with the Lovers card which allows her to see into the hearts of others (yeah, so a lot of the tarot powers make no sense when you compare them to the card that grants them. Death, for example, just makes you fall asleep for a bit). She’s presented across the first episode as a brilliant character – she’s cool and collected and she kicks bottom without a shred of fan service (she even wears trousers). It’s a really powerful introduction as she butts heads with those around her up to and including her father, calling to mind Merida from Disney’s Brave in a lot of ways. One reason for this is that her father announces that there will be a contest for the powered members of the family - they will fight in a grand tournament, the winner of which will become the new head of the family and will marry Felicita to seal the deal, much to her dismay.  Fortunately the gang of young men in the family will support her... well, two of them will anyway. Both the taciturn Nova and headstrong Liberta (romance anime stereotypes – check) agree to nullify the marriage part of the deal should they win, but Felicita is ready to enter and deal some damage of her own! It’s a great set-up and by the end of it you’ll be on the edge of your seat waiting for the brilliant drama that’s sure to unfold throughout the tournament of super-powered men and women aiming for the top spot.

Ten episodes later... you’ll still be waiting. You can argue all you like about what the series is supposed to be about and how the character relationships are the main point of the show, but the fact of the matter is that the opening episode is utterly misleading on pretty much every level. The grand tournament  is all but non-existent and doesn’t take place until the final episode (bar the thirteenth OVA episode) and mostly just hints at what it could have been as it rushes to get through a whole series worth of action sequences. The tarot powers that the family have been granted are barely used and seldom referenced throughout the entire series, and are mostly just an excuse to write the characters out of any given dead-end the writers happen to have written themselves into. The ultimate sin however is that Felicita goes from such a strong and independently powerful character in the first episode to a 1950s era Disney princess for pretty much the entirety of the rest of the series.  Imagine if, after the first episode of Ghost in the Shell: Stand Alone Complex, Motoko had stopped taking part in the missions and spent the series worrying about if Batou had a good relationship with his father or if he’d like the cake she was baking. It would be awful, an utter betrayal of everything that made the character good. It’s the same here - following the first episode her major actions are to return a lost kitten to its owner, make a lemon pie, do some gardening and tell stories to children.

You can’t even successfully raise the argument that this is a series about the character relationships because these are so poorly mishandled. All the male characters are bland stereotypes driven by their single motivation and culminating in a character who spends most of the series going on about how much he loves Italian food. There’s no sense that any kind of romance or even a good friendship story exists anywhere here, and every time the series tries to inject a backstory to try and get you to sympathise, the attempt falls flat in the face of the bland characters and plot lines that a four-panel manga would throw out for not having enough depth.

If you want to add further insult to injury, then throw the US dub onto the pile, which starts off strong but proceeds to get worse the more you watch it as the producers for some reason decided that gender-swapping roles was the way to go - Nova for example is voiced by Kara Greenburg, who becomes laughable by not even attempting to deepen or lower her voice. Even side characters suffer from this, with their attempts to drag out cheap laughs by having a man put on a poor falsetto to play an old woman. It becomes more painful the further you go on, which is a shame as Luci Christian puts in a good performance as Felicita. The Japanese dub, where you might expect to find the gender swapping, has gone the other direction and has all the males’ roles played by men, and whilst there’s nothing special at all to be found there it’s at least tolerable.

The only truly positive thing I can say about the show that wouldn’t just be an empty gesture in highlighting the ineptitude of it all is that the opening theme song - Magenta Another Sky by Hitomi Harada - is genuinely great and is a blast to listen to.

If I take a step back from the series I would have to say that the series' origins as a visual novel have likely put some limitations onto the show in terms of the characters and story structure, although given the number of good visual novel adaptations out there this is a reflection on a poor choice of source material more than anything. It’s especially disappointing that an adaptation of a female-targeted game, made for a female audience by one of the few female anime directors, fails on so many levels. I know that I’m not the target audience for this kind of series, but frankly it’s so poor I doubt those it is intended for will be all that impressed either.

2
Strap on the concrete boots and send it to sleep with the fishes.
COMMENT AND DISCUSS
blog comments powered by Disqus