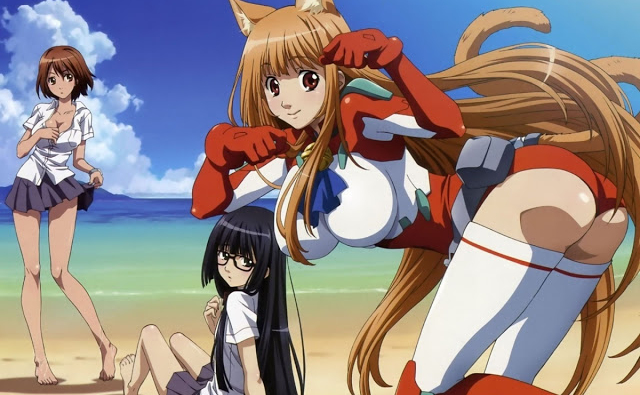 Series where the protagonist is surrounded by girls isn’t a new thing in anime. Tenchi Muyo and Love Hina spearheaded it here in the UK, but unfortunately it can be bogged down by stupid amounts of fan service and constant misunderstandings with blushing all around. Asobi ni Ikuyo is trying to mix it with its alien cat girls and secret agent missions, but is this stray really worth taking home?

The series follows Kio as he attends a funeral in Okinawa. During the funeral Kio encounters a girl called Elis; an alien with some very obvious differences to your normal Earth-bound girl. Elis wants to explore the world to see if relations can be started between Earth and her people, so by roping in Kio as her guide we get a front row seat to all of the misunderstandings and sexual innuendo.

I’m in two minds about Asobi ni Ikuyo, so I’ll start with the side I’m inclined to like the least - this is a harem anime of the purest kind. It’s been a while since I’ve watched a series like this, but here we are. Elis is a catgirl with a large bust; Kio’s childhood friend Manami is a girl who wears low cut tops and is in love with Kio; Aoi is another friend who shares DVDs with Kio, wears very tight outfits when working and is in love with Kio; Itokazu, the group’s teacher seems to have a motherly thing for Kio… oh and the alien girl wears the shortest shorts and tightest tops while being amazed by everything and everyone. But isn’t it cute when she mistakes giving compensation for taking residence in Kio’s house by offering herself to him because that’s what the porno mags under his bed told her?

You can kind of guess where I am going with this, during these segments the series hits every cliché, fetish and lowest common denominator imaginable  until you’d swear the series was written by a horny teenage boy. Hell, the anime just starts blotting everything out by episode three as everyone is pretty much naked. But they are embarrassed, so it’s ok. This is the kind of show that would normally make me sick and get me to switch off in disgust as being a shallow, unintelligent piece of rubbish more suited to appear on Bravo during its late night slot. Yes there are people out there who will enjoy the cute, naked, hot girl doing cute things while being even more cute and then watching her breasts bounce about like two puppies fighting under a duvet, and this from just from the first episode.

So there I was, pretty much close to making up my mind, but then the latter half of episode two started and things got awesome. There were guns, explosions, an insane amount of detail in the fight scenes and some pretty damn awesome action. Hell, even Elis in her cute way with magic hammers was pretty damn cool as well. Then the cute little catbots get introduced and it was like seeing the Tachikoma all over again. They were cute, but they are just so much more than general comic relief. Well, they are comic relief, but with comedy I actually laughed at. It was insane.

So the big question at the end of the day is; do I like this? Honestly, that is a very difficult question to answer. Asobi ni Ikuyo has things I hugely enjoy in an anime, but at the same time it has a vast array of clichés and annoyances from its genre that I personally do not like. Someone who loves their guy surrounded by girls scenarios and isn’t looking for too much plot in amidst the titillation will more than likely sign up straight away for this. For anyone else, the lack of any real plot so far beyond the catgirls coming to play, as they keep saying, means that there isn’t anything here that is going to melt the grey matter.

On the other hand, it is a series that you can watch with the brain switched off and feel that you have enjoyed some aspects of it. After I stopped over-analysing all  of the aspects of it, I realised that I was actually quite enjoying myself, be it because of the stupidity of the situations that are presented or the highly entertaining action scenes. It is very much a case of try before you buy, but you never know, you just may be equally entertained and disgusted with yourself like I was.

6
Mix together equal parts of stupidity, fun and a dash of action and you get a cocktail you’re not quite sure about liking.
COMMENT AND DISCUSS
blog comments powered by Disqus