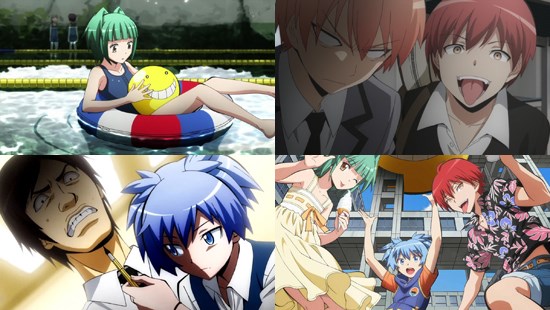 Class 3-E has certainly had a packed curriculum - no-one can accuse these kids of being left idle, as we're halfway through the series of Assassination Classroom and they haven't even finished the first term. The clock is ticking though, and they have a lot of school to pack in if they want to have a hope of assassinating Koro-sensei, the aimiable, avuncular banana-yellow octopus-man who has become their schoolmaster... and the apocalyptically powerful alien who will be destroying the world when the year is out. The pupils of 3-E are torn between their mission to kill Koro-sensei, the monster who threatens to destroy them all, and their loyalty to the man who's shown care and interest in their education and growth into young adults - and the powers-that-be are getting impatient with these sprogs and their lollygagging. The time is coming when they'll try to alter the rules of Koro-sensei's game; and Koro-sensei himself did not simply emerge out a vacuum, with figures from his past stalking him to settle old scores.  Class 3-E are going to get caught in the crossfire, and if mercenaries, mutants, assassins, black-ops special-forces, and planet-busting holocausts weren't bad enough their parents are still harrassing them for straight As on their report cards.

The new release of Assassination Classroom picks up right where we left off last time. It continues to look gorgeous with a bright and colourful palette - the pristine mountain-spring swimming pool that Koro-sensei builds for his class looks so good I wouldn't mind going for a dip myself. I don't understand why 3-E are so desperate to get back to the main campus when they've got a veritable natural paradise all around them! Depicting the examination episodes as gladiator duels against monsters is also an effective way to make a lot of scribbling and scitching an interesting journey into the imagination instead. You can't fault Assassination Classroom for its production values and it always makes the show an easy, appealing watch.

As Assassination Classroom hits very similar beats in its early episodes - the first release had midterm exams, this one has finals - and continues to push the same worthy message of believing in yourself, respecting children's growth and potential, nurturing talent, and so on, all the while embarrassing and showing up the snooty elites trying to put them down. The irony of class 3-E feeling protective towards the creature they're meant to kill remains, although when a few dissenters in the class refuse to play nice it's hard to disagree with them - it's starting to look a lot like Stockholm Syndrome, and frankly for a class who are meant to be the dropouts and no-hopers (the lyrics to the opening sequence includes lines like "dropout mentality", "someone else's problem", and "lost in many ways") these kids are such an irritatingly prim-and-proper bunch of goody-two-shoes teachers-pets that I was starting to feel that I wanted to bully them myself.

It was established in the previous release that the theme of Assassination Classroom is that it's not the children who are failing it's the system that's letting them down - I remember that (I reviewed it!), but the thing is that people who feel that they've been cast aside are embittered and cynical and it takes a lot of hard work to earn that trust back. Right from the word go almost all of 3-E were model students and it only becomes more egregious here. As important as the message is it's underserved by not acknowledging the effort it involves... and only becomes ponderously heavy-handed when Koro-sensei even interrupts an actual gunfight with someone trying to kill his pupils for a long monologue about the moral fibre to cope with setbacks. Yeah, we get it already. I also understand that you need to protect these sensitive souls' self-esteem but the constant fawning over them is not helping them, it's spoiling them rotten - when the kids are creeping up behind a bomb-planting villain and Karasuma has to interrupt what's going on again with yet another speech on how awesome and superb the kids are doing I was getting monumentally fed up with these special snowflakes being prissed and preened over, and the overindulgence makes you think that Koro-sensei is bringing up a mob of entitled brats. If you have to tell me how cool these kids are, it's because I can't see it. The anime also seems to be a bit inconsistent about its own theme - despite being about empowering the whole class there's obviously a core cast of star pupils who'll get all the action (you can tell which ones, they've got colourful hair!); the AI Ritsu is completely underused and frankly looks a bit silly with her monolith standing in the corner of the classroom like someone forgot to wheel the TV trolley back to the A/V room.

The incessant speechmaking wrecks the show's pacing (again, there's not been much effort to adjust the manga script into an anime screenplay), but to be fair the classroom sequences actually do impart a bit of useful knowledge when they're talking about the English set texts, with a genuinely valid point about the value of wider reading against rote learning. However there's also a complete lack of threat and some painfully saccharine resolutions - there's a bioweapon on the loose, but that's fine, they swapped it out for a dud version and everyone'll be okay. Koro-sensei is also a cheat - the kids plan, they learn their opponent's weaknesses, they lure and misdirect him effectively, they counteract his defences - and the reward for their effort is for him to pull another ultimate defence out of nowhere. You've got to keep the serial in publication but I think I actually called "lame!" out loud.

Still, as much as I can carp about it not being hard-hitting enough, it's a school cartoon comedy not a gritty war drama and the central conceit of Assassination Classroom is a worthwhile one that merits being told, although the occasional sex references (the kids distract Koro-sensei for an assassination attempt by embarrassing him with the exposure of his porn collection) and the needless foul language that peppers the English dub probably exclude it from the younger children who'd benefit from it most. For all its clumsy script it does look pretty and if you watch it just to enjoy all the glittering colours you may still chance across some pearls of wisdom as well.

English 5.1 and Japanese stereo audio with English subtitles. Extras include episode commentaries from the US cast.

7
A straightforward and improving shonen tale of hard-work-and-guts, with good production values and some fun extra features to help the medicine go down.