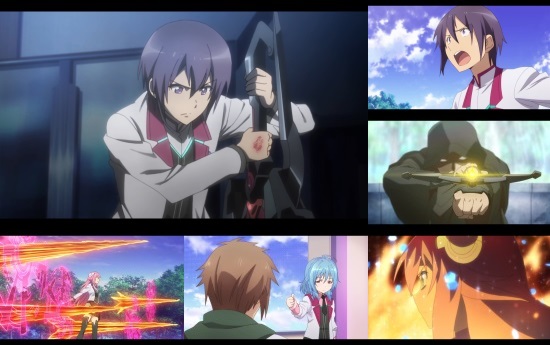 With another anime season comes another series based around a magic high school. Within this series there is no "big bad" or enemy of unknown origins that has called for the magic academy to come into existence to fight. Rather like most other series of this ilk, the characters mainly partake in fights with each other to prove who is strongest amongst them. The main story revolves around an upcoming tournament between the magic schools in the area and the preparation by the students for it. As with most anime, things begin with a misunderstanding between two students - one of which being a transfer student and main character of the show, Ayato Amagiri. The misunderstanding takes place as he accidentally jumps through a window into a girl's room in the school dorms as she's changing, thus highlighting another cliché of the genre, which in turn leads the way into showing the duelling and action aspect of this show.

For the most part battles and action in this show are fought with magic weapons that look like normal devices but turn into beam-like swords, axes etc. From this there isn't anything rather noteworthy or standout about the action in the series, as it mainly showcases standard duels between close range combat fighters. Mixed into this is some characters ability to use attacks that can be defined as magic by launching projectiles and creating fire. The action in these scenes is passable enough to be dynamic at times and to hold the viewer's attention, and at times there are a few moments where the animation does show how much attention and care was given to it, but most of the time battles follow a really stringent formula that so many shows seem to limit themselves to - the main character accidentally finds themselves in a situation where the only way to resolve it is by having a battle, then when the fight begins they end up doing nothing but dodging and then finally unleashing the full extent of their power for the briefest of moments to win.

The Asterisk War explains this with some dialogue and flashback scenes that show that the main character's use of his power is limited and tied into the disappearance of his older sister. This also ties into Ayato's reason for transferring into the school and his involvement in the upcoming tournament. From this it feels like the most arbitrary way to have Ayato appear to be the series strongest character while also having a limit on how much he can do in order to have fights exhibit some sort of tension. Tying all this into the whole mysterious disappearance of his sister should add some weight to this and the story as a whole, but it falls flat due to the story not being all that interesting or not giving us enough incentive to care about why Ayato needs to find his sister other than the whole aspect of him needing to find her to get his full power back.

Meanwhile, the series has a cast of supporting characters with their own back stories and motivations, most of which takes a back seat to the main plot and is only given an occasional scene of importance and some dialogue to flesh out the characters slightly. Not enough is done with the characters, making them feel slightly one-dimensional to the point where it's hard to care about them. The characters also fall into certain anime stereotypes as well - the stuck up tsundere, the childhood friend with deadpan reactions, the tough guy upperclassman and the overly friendly student council president. The characters fall into their stereotypes so well that they become rather forgettable and not very interesting overall.

You can currently watch The Asterisk War in streaming form on Crunchyroll.

4
Not completely unwatchable, but does nothing of note to make it stand out in any way
COMMENT AND DISCUSS
blog comments powered by Disqus