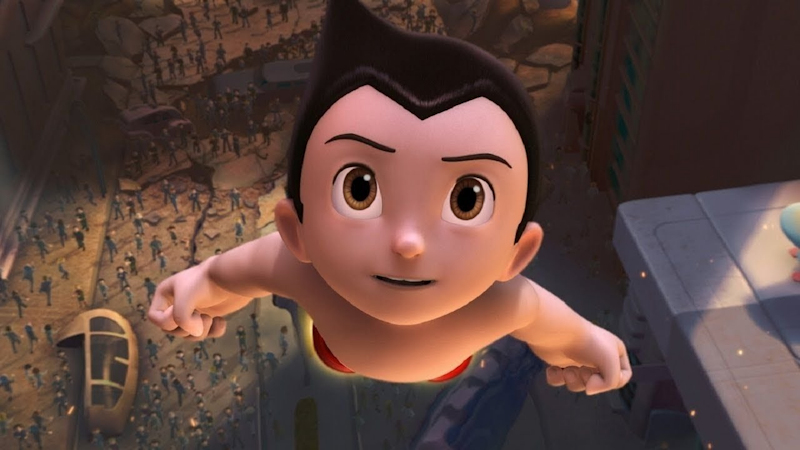 "Hollywood adaptation" - words that send chills down the spine of the ravenous hardcore anime fan. After the less than stellar attempts at bringing Speed Racer and Dragon Ball to the west, you can understand why the average anime fan is more than a little edgy whenever a western adaption of a popular series is announced. The latest to get the treatment is the beloved classic Astro Boy, but does it measure up to its legacy?

Set in the far future upon a floating platform called Metro City, Dr. Tenma and Dr. Elefun are about to demonstrate a new kind of power source and the latest robotic weapon, dubbed the Peacekeeper for the militaristic President Stone. Tenma’s son, Toby, is caught in the testing area of the Peacekeeper and is killed. Grief stricken, Tenma rebuilds his son as a robot using his DNA to embed his memories, along with all the latest defence weaponry so that he isn’t harmed again, although things quickly deteriorate as Tenma realises that the new Toby will not replace his son.

So let’s get what most of the fans of the original Astro Boy are going to ask - Is it faithful to the original? In short... no. The film is very loosely adapted from the original manga and anime to create what is very much its own film. There are nods to the original, such as the plans for Astro being the ones used from the manga, the fact that Astro himself has only been altered to look slightly older and the fact that Astro’s hair spike will switch sides depending on the perspective the camera is looking at him, as the manga used to do. Apart from this, the average Astro Boy fan will no doubt belittle the film as not being a faithful adaptation of the original.

While it may only take elements from its source material, Astro Boy is by no means a horrible film - In fact it is quite the opposite. The film is as entertaining as any other kids computer-generated movie and should be appreciated as such. It follows a few paths that have underlying messages about pollution, racism and class divides which the average adult will easily take on board, while kids on the other hand will no doubt enjoy the explosions, combat and general childish fun. There are a few kid conventions that sneak their way into the film, usually coming from Dr. Elefun (played by Bill Nighy) being the fatherly figure. Nicolas Cage plays the role of the obsessed and ultimately neglectful father of Astro, but not in such a heartless way as originally depicted for reasons we can only imagine are to appease the Hollywood gods.

In the grand scheme of things, the film is perfect as a kids movie. It has action, explosions, giant robots and arse jokes. The CG itself is actually very well done, to a similar standard as the studios last film (TMNT) and while not mind blowing it's what you would expect from a high budget film of this type. It could be argued that this westernised version of Astro Boy is a good introduction to anime for younger people - While no doubt the fans will scream to the high heavens that this isn’t anime, it is still does give a spotlight to the genre far and beyond the efforts of Speed Racer and Dragon Ball Evolution and to ease someone in, it is a good start. For those looking for an entertaining film to watch with the family then this will hit home, just don’t expect it to be a homage for the fans.

Astro Boy is due for a nationwide release in cinemas on the 5th February 2010.

7
An entertaining kids film in its own right, just don’t expect it to stick too close to Astro Boy lore.
COMMENT AND DISCUSS
blog comments powered by Disqus