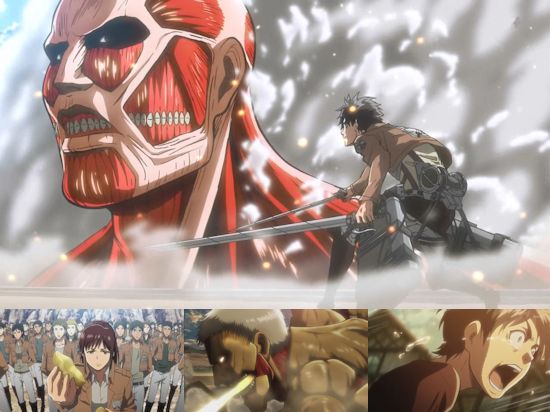 When my esteemed colleague Robert Frazer reviewed the first few volumes of the original Attack on Titan manga very recently, his closing thoughts could basically amount to "watch the anime adaptation instead". Well, here I am, obeying this command and settling in to watch Studio Wit's Attack on Titan anime - is Mr. Frazer right, or are we about to descend into UK Anime office fisticuffs?

As the series begins we find ourselves in the year 845, and occupying a city district known as Shinganshina District. While all appears to be calm and peaceful, this is only the case within the city walls - take a look outside of those towering fortifications and you'll find all manner of terrifying giants, known to the remaining humans as Titans, who are literally ready to gobble up anything that takes their fancy. All of a sudden, you can see why those high walls are in place...

With a century having passed without a successful Titan attack breaching the city, the pocket of humanity which remains having been previously decimated by the Titans has become complacent - guards and military forces spend their time drinking and chatting, and the "Recon Corps" who actually go out into the field to investigate and combat the Titans are seen as suicidal idiots rather than dedicated professionals who should be revered. Of course such complacency is a very human trait, and one that ultimately breeds failure, so it's no surprise (to us at least) when the sudden appearance of a behemoth even by Titan standards and an ensuing assault on the city's outer walls throws everything into chaos.

It's a single moment that will have a profound impact upon all of humanity, but we view this play out from a very personal point of view via our protagonist, Eren. Already frustrated by the lackadaisical attitude towards the Titans exhibited by those around him, the loss of his mother in the Titan attack only drives his determination to new levels, and thus these early episodes of the series see him and those close to him dealing with the personal aftermath of the attack before fast-forwarding to watch him take his first fleeting steps towards completing his military training and enabling his ultimate goal - the death of all Titans.

If there's one thing that Attack on Titan does superbly (and don't worry, there's more than one thing it excels at), it's in terms of the show's world-building. While its core concept is engaging in its own right, the level of thought and detail put into the world in which this last remaining pocket of humanity exist is exquisite - although aspects of it aren't explained in quite as much depth as they maybe should be, it still adds a lot to the experience as it carefully builds its world, even using the mid-episode eyecatches to add small but valuable extra points of data to our knowledge of what is being laid out before us.

Equally striking alongside this sense of place in the world is the show's animation style - filled with bold, thick lines, it immediately looks a little different from a lot of other current series, and when push comes to shove there's some top-notch animation to be found here that can be powerful when it comes to depicting the horror of a Titan attack, or light-hearted when it comes to the much-needed moments of comic relief that can be found beyond the opening couple of episodes to break things up a bit.

Even four episodes in, we're still only reaching the cusp of what we're really here to see - diminutive humans taking on towering Titans, but in spite of this Attack on Titan so far is so accomplished at drawing you into its world and scenario blood, guts and all, via its fascinating premise, strong characters and a compelling narrative to house them in. If it manages to keep up this level of quality throughout the series, there can be little doubt as to what the best show of the spring anime season will be.

9
From its grandiose opening theme onwards, Attack on Titan so far is a confident and accomplished piece of world-building and story-telling.
COMMENT AND DISCUSS
blog comments powered by Disqus