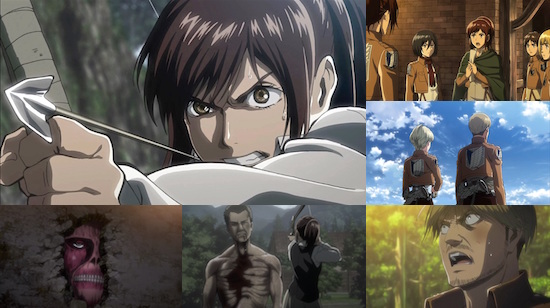 The first series of Attack on Titan was a massive breakout hit here in the west, pervading well outside the usual anime circles. So much so that we have to go back around a decade or more and look to the likes of Death Note and Fullmetal Alchemist to find anything comparable. However, Attack on Titan's first season itself came out all the way back in 2013 - A combination of waiting for a suitable chunk of manga to adapt and work on other projects have lead to delay after delay. This means it is now 2017, four years down the line, and all that love and hype surrounding the series was a long time ago. So, can Attack on Titan Season Two rekindle the flame or has it missed the boat?

Thankfully, given the time that has elapsed since the last season, the new season begins with a short recap of previous events, meaning it is likely that the first new thing you will notice about season two is that there is a new opening theme: “Shinzou wo Sasageyo”. Sadly this means that we don’t see a return of the show’s iconic opening “Guren no Yumiya”, which bowed out halfway through series one. With the opening over, and with very little fanfare, it’s pretty much straight back to business as usual - almost as if the four year wait was a figment of our imagination.

The Survey Corps’ Section Commander Zoe Hanji is extremely angry with the Church over the revelation of the Titan in the wall, and Pastor Nick seems to know more than he is willing to tell. Hanji suffers something of an existential crisis as she begins to wonder about the makeup of the other walls. However, all that has to wait as a rider rushes towards the city declaring that Titans have been spotted inside Wall Rose...

No sooner has this revelation been announced than we are catapulted back twelve hours into the past to witness the events which unfold in the lead-up to that proclamation. The rest of these opening epodes cover that twelve hour period and follow the fortunes of our old friends from the 104th Training Corps and those tasked with guarding them after the events of season one. If I delve any further into the actual events of these opening episodes I’ll start hitting some pretty big spoilers, so I’ll just summarise them by saying: several members of the 104th get to return home, with mixed results; the series takes an interesting delve into Sasha’s past; several conspiracies are hinted at; there’s a new “abnormal” on the prowl; we get to see some Titans sprinting; and a horse literally gets thrown like a baseball.

You may be disappointed to learn that the action thus far in season two is not the same dominant force which made the opening of the first season so memorable and really made certain moments stick in the viewers mind. However, toning down the action allows the series to flesh out and explore the mysteries of it’s story, while providing all the greater impact when the action does kick into gear. This will likely be welcome news to viewers of season one who preferred the more considered pace of the first season’s latter half. Thus, so far at least, this season very much continues where season one left off: slowly adding to the layers of intrigue, while still keeping the visceral and bloody action ticking along.

Attack on Titan, unlike so many of it’s contemporaries, provides a real feeling of suspense, even dread, over the fate of it’s characters. It instils in the viewer the knowledge that no character is safe, and perhaps even that they may never solve the mysteries of the Titans before it is too late. The feeling of near futility in the actions of those fighting the Titans, the shadowy and secretive Church, the increasingly interesting “abnormals” and so much more all add up to give a real depth and gravitas to the world of Attack on Titan.

Even in these early episodes it is clearly a case of business as usual, and the way the series effortlessly gets back into the same stride it was in four years ago is nothing short of a miracle. The animation remains as eye-catching and fluid as it ever was, and similarly the soundtrack is as evocative as ever. Really, the biggest complaint you can level at Attack on Titan Season 2 is that it is just more of the same. However, when the basis for that is as good as the first season it is not really much of a complaint at all. Having said all that there are hints and nods towards forthcoming revelations which may well rock the world of Attack on Titan to it’s core, so we’re hopeful there is even better still to come.

8
More of the same, but when the template is as good as its first season we really can’t complain.
COMMENT AND DISCUSS
blog comments powered by Disqus