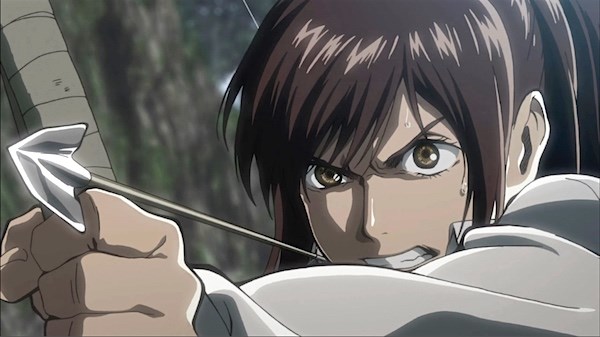 Humanity is pushed to the brink of extinction, vicious monsters roam this world hungry for man flesh and Eren Jaeger still can't go five minutes without shouting… Yes Attack on Titan is back, and it’s still as good as you remember.

Last time we saw Eren, Mikasa, Armin, and the rest of the Survey Corps they had just apprehended the traitorous titan, Annie, and in the process they had exposed a secret of the massive walls that protect them from the terrifying titans. This second season wastes no time and picks up right after the end of the first season, and I mean right after. The episodes are numbered 26 -37 showing this is a straight continuation and not a standalone second series. From here we a propelled on a non-stop journey that is one part horror story, one part action adventure, and about ten parts huge revelations (Ed - Don’t forget the flying horse, never forget the flying horse). This is a breakneck return to the world of Attack on Titan, and you had better be paying attention. The show makes absolutely no concessions for the causal viewer, it packs information and incident into all twelve episodes of its run.

The story casts a much wider net the the preceding season, with a lot of focus on the supporting cast. In particular previously minor characters Ymir and Crista, who get a lot of development as well as a glimpse into fellow Corps members Sasha and Connie's pasts, and home life, respectively. While our central power trio still get plenty of screen time, it takes until about halfway through the season before they become the focal point again. This could have been a disaster, but fortunately the stories we are given here are just as good as what came before. Less the occasional pacing issues of that first season, it’s genuinely surprising how much is crammed into this short run.

WIT studio have returned to produce this series with director Tetsuro Araki. The visuals of the show are carried over from the first season, with what looks like an increased budget. The backgrounds and details of the world are beautiful to look at (especially on Blu-ray) and the animation of the characters is well done, but suffers from some of the same short cuts the original series had. The animation however really shines where it counts, in the action scenes. This reaches an apex in episode seven with the entire runtime dedicated to a bone crushing battle between the Survey Corps, Eren, and two old enemies. The only real misstep is the integration of 3D computer models, especially the use of them to render one larger than life titan, that looks - frankly - terrible, and will hopefully be abandoned for the upcoming third season.

With all the praise I've been heaping on it would be remiss not to mention that the series does have its issues, some of which are not related to the content but more how it was presented. Or more accurately how long it took to get this second season. It’s been four years since Attack on Titan marked its self out as the latest must see show, and as a gateway anime for any potential new fans of the genre. That is a long time to wait for a follow up to such a phenomenon, especially when that return feels like a stretch of (albeit really good) mid-season episodes. There are a lot of revelations and set-up here, but not very much in the way of pay off given the ongoing nature of the story.

The cast remain much the same as the show’s first run, with the focus on developing, rather than expanding, that already huge roster. For what it’s worth Eren is still a bit of a middle of the road shōnen hero type, but is made fallible and determined enough to still be likeable. One thing the writers really need to dial down is his constant raging and shouting, he spends so much time in that mode that you expect his head to explode. Of course, as all Attack on Titan fans know, this may be Eren's show, but Misaka is the real star. Not only is she smarter and more capable than our hero, but she manages to show a much larger range of emotions, and is the one to watch to see what badass stunt she pulls off next. The show also deserves praise for steadfastly refusing to sexualise any of its female cast members, and allowing them to be the equals of the males, fighting, and dying, side-by-side with them.

The series creators also remain on point with picking their opening and ending themes, with new opener by Linked Horizon providing the kick to get you in the mood for each episode and the closer being one of the creepiest things I've ever seen and heard, and given this is Attack on Titan that really is saying something!

9
A fantastic continuation of an already great show. Bloody, bleak, and riveting, miss at your peril.
LATEST REVIEWS