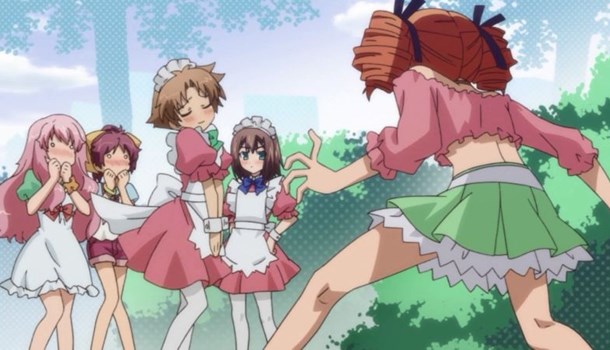 School wasn’t a particularly pleasant place for me as a youngling. I always found myself in fights with the other students (and teachers), I was a bit of a recluse and I didn’t have many friends. I did, however, manage to form a chess club, which was pretty much my main crowning achievement at the school. These were purely personal eccentricities though and didn’t really reflect on the institution as a whole.

The school itself was a nurturing environment filled with compassionate teachers who actually cared and wanted you to do your best, and helped you achieve your best by offering the best advice possible. Aside from the students who attended the school, I felt that this was a place where even the most stupid and mentally challenged pupils could achieve their best.

So lo and behold, what a surprise it was to see that the premise of this show, Baka and Test, is almost the exact opposite of what I had come to expect from a place of learning. The poor students of the Fumizuki Academy are forced to undergo placement tests prior to the school year which determines what class they are to attend. The tiering system of the school allocates each student to a specific grade of class, with the grade A class sitting at the top of the school and receiving both the best education and equipment; whereas the lowest grade, the F class, find themselves forced to study with remedial teachers from cardboard boxes. The harshness doesn’t end there either. If you do badly at this placement test, you are forced to remain in your designated class for the entire school year with no hope of further promotion, no matter what your true potential is.

All is not lost though, as there is still one way to improve your standing... and this is through battling your higher grade peers using your Summoned Beings. These digital avatars, formed from the personal traits of each individual student, are powered by the test scores that each student most recently attained in the most recent exam for a particular subject. The better you do on the test, the stronger your avatar. Through winning battles with peers with a higher standing than yourself you can win for your class, and yourself, better teaching and equipment. However, if you lose, you are forced further down the remedial spiral of doom forcing you to live through your school career in a state of perpetual hell. It isn’t fun being the underdog at this school...

Baka and Test is focused on the antics of the members of Class F as they try to improve their lot in life through continuous battles with their peers in the higher grade classes. The story centres around a quite idiotic chap called Akihisa Yoshii. Akihisa isn’t your run-of-the-mill moron - no, he is a special kind of moron, one who requires special treatment within Fumizuki Academy in the form of the school's only physical avatar. You know, the kind of digital avatar that can manipulate real world objects; the kind that is useful for doing those menial jobs like cleaning gutters, moving chairs, etc. Thankfully for Class F, the other members of the class aren’t completely hopeless and just suffer from a lack of decent educational support on particular subjects, or from decent health care when it came to the placement tests. The class has its resident beautiful genius, Mizuki Himeji, who was placed in the class by accident due to passing out during the placement test. Also in the class is the person now known as “Androgynous Boy” or the “Walking Trap”; there is “Hentai Boy” or the “Boy who lifts up girl’s skirts”; we also have “Red Haired Tsundere #271” and everyone’s favourite, “Clichéd over-exuberant class leader”. There are other class members and other children at the school, obviously, but it is these six who actually stood out to me as I delved into the world of Baka and Test.

Baka and Test is in itself the story of failure. We watch this band of underdogs try and fight against adversity, which almost inevitably leads to failure in most cases. This, ladies and gentleman, is a reverse underdog story - at least, so far it is.

This is only part of the story however. Baka and Test is actually a school based situational comedy that seems to have taken a fair portion of its inspiration from the antics of Moe, Larry and Curly of The Three Stooges fame, with our resident moron Akihasa regularly covering the parts of all three of the Stooges at once. Unfortunately for Baka and Test, the slapstick and situational comedy is all that really stands out for the show. The jokes introduced in the first couple of episodes are used with such regularity on the first disc alone so as to lose all comedic value as the show progresses. I mean, there are only so many times you can confuse Androgynous Boy for Red Haired Tsundere #271! The comedy stylings of the series were clearly not for me as, outside of the introductory episode, I barely managed a few chuckles as the series progressed. What I did quite enjoy however was the English voice acting. There are times when you can tell that the actors had a blast, and this was one of them. The dialogue may be repetitive when it comes to jokes, but the actors gave it their all, just like the characters they were portraying, to give the series some life - that for me is one of the saving graces of what would be an otherwise disappointing series.

I am not going to vilify the show for not making me laugh. I am instead marking it down due to the lack of originality; the fact that after nine episodes I could barely remember the names of two characters and the series’ over-reliance on purile slapstick comedy which would embarrass even Curly. Perhaps I just didn’t get it?

Baka and Test clearly isn’t my cup of tea, but it doesn’t mean it won’t be yours. I implore you to take my words as merely an opinion and to form your own opinions of what is to some, already a much-loved comedy series. As the old saying goes, “You don’t know until you have tried it” - it works every time. Well, maybe not every time...

5
A light-hearted school based situational comedy; switch off your brain before watching