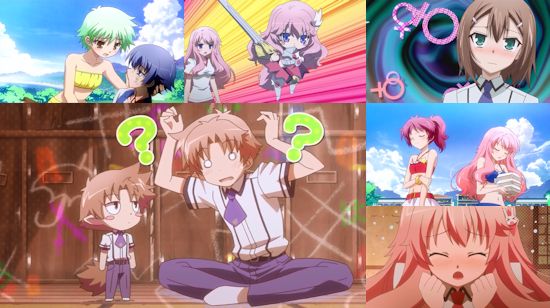 The baka are back-a!  After some delays both in the US and here, the second season of Baka and Test: Summon the Beasts reaches us in the requisite shiny disc format we like to call DVD.

In essence, if you're already familiar with this series then nothing has changed here - season two continues to follow the motley crew of boys, girls and a Hideyoshi that make up Class F of Fumizuki Academy; the lowest of the academic low in this school where your grades and abilities define your entire school-going experience.  The only way out of this educational poverty and a classroom of rickety wooden desks (or worse, cardboard boxes) is to use the avatar provided to each student as a representation of their owner's test scores to fight your way up through the various ranked classes to improve your lot.

At least, that's the synopsis for the series as a whole, but in truth this second series of Baka and Test cares not for this kind of inter-class rivalry for the most part - protagonist Akihisa Yoshii and his Class F buddies have no real interest in progressing onwards and upwards within the school's system, which thus leaves the show free to explore whatever it pleases, only falling back on the whole battle and summoning system when other inter-class conflicts arise.

The first thing that really jumps at you upon sitting to watch this series - much like its first season - is that Baka and Test has the look and aesthetic quirks of a series produced by SHAFT.  This is hardly surprising given that both the director of the series and much of the show's staff are ex-SHAFT employees, and there's a certainly enjoyment to be found from some of the more visually inventive moments that this look and feel to the series brings, but at times these elements feel overblown or overused to the point where it loses its edge.

Settle into the show beyond those visuals, and you come across some decidedly traditional anime comedy fare - very hit and miss and heavily character-driven around the cast's various tropes and relationships.  When Baka and Test's comedy hits, it hits hard - there are some wonderful gags, punchlines and set-ups that catch you unawares and leave you laughing until you can barely breathe.  Note, however, the use of the word "some" in that previous sentence - there simply aren't enough of them to build up or carry any real energy, and too much of the comedy is predictable or the same concepts used over and over again to make such bouts of intense laughter anything more than a very occasional occurrence.

These comedic failures aren't particularly helped by much of the second half of the series becoming overly occupied with the show's romantic entanglements of the story.  In fairness, a pair of episodes which dive into the back story of Minami in one and Yuuji and Shouko in another are amongst the series highlights, serving as they do as a breath of fresh air and a break from the more formulaic comedy on show, but that aside the constant preoccupation with romance coupled with the use of over-used constructs like trips to the beach and festivals mean that genuine highlights are hard to come by.

In terms of this English release of the series, although these DVDs are missing the OVA episodes which accompany this second season all is otherwise well here - video quality is reasonable, subtitles are all present and correct barring a decision not to translate some of the Japanese "wall of text" eyecatches the series is uses, and a full complement of commentaries, trailers, textless credits and animated shorts give us what is otherwise a pretty comprehensive package.  The English dub for the series works very well for the most part, with smart casting and a top-notch recreation of the tone of the Japanese performances, with the sole exception of Hideyoshi, who sounds just a little too masculine in the English dub which reduces the effectiveness of the running gag surrounding that character at times.

Like so many comedy sequels, how much enjoyment you derive from season two of Baka and Test: Summon the Beasts depends entirely on how much you enjoyed the first.  If you loved the show the first time around, then there's plenty more of the same here coupled with some minor twists and moments of character exploration that should satisfy you completely; on the other hand, if you're apathetic to those earlier episodes nothing here will change your mind.  Baka and Test is certainly no comedy classic, but there are some momentary gems and strong episodes, helped along by eye-catching visuals, which at least give some polish to what otherwise threatens to be a mediocre series.

6
It has its moments, but they aren't frequent enough for Baka and Test to break free of its tropes and cliches to deliver anything particularly memorable.
COMMENT AND DISCUSS
blog comments powered by Disqus