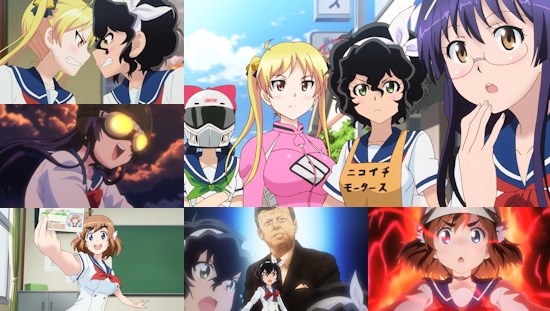 Over recent years, anime has proved that nothing is off-limits when it comes to the hobbies which can be indulged in as part of an after-school club - from musical instruments to military tanks to nothing particular at all, it seems that anything goes once the chimes play for the school day to end and any subsequent activities to begin. This brings us to Bakuon, a frequently tongue-in-cheek love letter to the joys of the motorcycle.

Not that our protagonist as the series begins, Hane Sakura, has any real interest in motorbikes - she's simply preoccupied with using her good old-fashioned pedal bike to make it up the hill to school. In such a situation, it's hard not to be enamoured at the sight of one of your schoolmates racing up the same hill with ease thanks to the power of the combustion engine, and suitably intrigued Hane finds herself joining the school's motorcycle club alongside new best friend Onsa Amano; rich girl who is too young to get a license Hijiri Minowa; and a club founder who is basically a moe version of The Stig. They would also be joined by the Suzuki Katana-loving blonde Rin Suzunoki in the club, if only she could temper her attitude problems long enough to actually admit that she wants to sign up.

When a series makes its entire focus a single interest or subject of passion, there's always a danger that each episode is going to wind up sounding like a Mastermind contestant practicing answering questions on their specialist subject and simply reeling off snippets of information and statistics like they're going out of fashion. As someone with no interest in bikes of any stripe this was my fear with Bakuon, and I was expecting to be left feeling like an outsider within minutes.

Thankfully, this couldn't be further from the truth - not only is Bakuon readily accessible (thanks in no small part to Hane's place as a complete newcomer to the world of the motorcycle), it's also frequently hilarious. While the show clearly takes its depiction of real-world bikes seriously, it still doesn't take the object of its affections too seriously and thus is happy to make fun of both the machines and those who ride them without fear of offending anybody. While there may well be some in-jokes that I miss, the broader sense of humour the series thus far has exhibited is easy to hook into. There's lots of silliness, plenty of leaning on character tropes (which feel a long way from getting tiresome in these first three episodes), and fun being made of bikes and bikers in ways that are either set up for anyone to enjoy or painted broadly enough with sufficiently snappy dialogue to get a laugh out of me. If evidence were required that this is a show that doesn't take itself entirely seriously, I present to you exhibit A for the defence - there is a talking bike in this show, and not only the protagonist can hear it talking.

Of course, like any comedy Bakuon can be a hit or miss affair - after a first episode that produced numerous belly laughs out of me its second instalment fell flat for a spell, leaving me worried that the magic had already dissipated before it suddenly found its feet and has returned to regularly providing big laughs ever since. As ever your mileage may vary (with every pun intended), but from a personal point of view Bakuon has proved to be far funnier than I could possibly have envisaged it being, and that's high praise indeed.

These laughs are certainly helped along by the show's voice cast, who bring plenty of energy to proceedings throughout and fit into their roles nicely as part of an overall presentation that is pleasing if unspectacular. While character designs fit the cast well (however improbable Rin's proportions might be) and bike designs usually seem nicely detailed, at times the series does struggle if it tries to do anything too interesting with the bikes in motion. In particular, a few brief shots purporting to be a motorcycle race are laughably poor, and thankfully the animation style and subject matter of the show is largely restrained enough to ensure that these kind of limitations rarely raise their heads or otherwise become distracting.

If you're looking for a light, frivolous comedy packed relatively densely with jokes, then Bakuon is certainly one of the triumphs of the season from this perspective - I can't actually think of many full-length comedy anime series of late that have made me laugh quite so hard, quite so often each episode, and this has already become a show that I bump up my "things to watch" list each week to enjoy after a hard day's work. Even if you don't know your horn from your handlebars, chances are you'll have just as much fun indulging in its silliness as I did.

You can currently watch Bakuon in streaming form on Crunchyroll.

8
Bakuon is already well-down to the road to being a great comedy, and shows few signs of making a U-turn.
LATEST REVIEWS