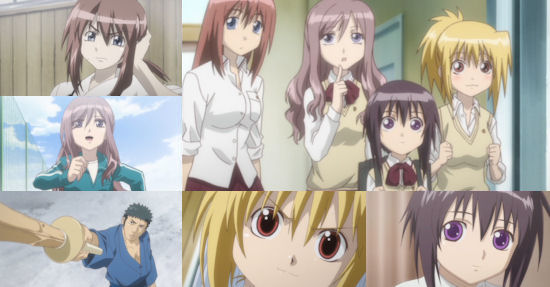 What is it with school teachers in anime?  Almost to a man (or woman) they seem to be bad drivers, poor role models who don't practice what they preach, some kind of eccentric or a combination of the three.  This brings us to the opening half of Bamboo Blade, and a teacher in Toraji Ishida (or "Kojiro" as he's known) who falls into the second category on account of his willingness to place a bet with an old friend on the prowess of the after-school female kendo team which he oversees - if his team can beat his friend's own girl's kendo class, he wins a year of free sushi.

Ignoring the morality of such things, this serves as the perfect setup for the opening episodes of this series, immediately presenting Kojiro with a major dilemma - he only has one of the five required girls to stage a kendo match, relentlessly cheerful club captain Kirino.  This means plenty of dashing around trying to rope other suitable girls in to join the club, introducing them to the viewer in the process as this fledgling kendo club grows in membership courtesy of the introverted kendo genius Tamaki (who is introduced via genuinely the funniest scene I've seen in an anime series this year), two-faced Miyako and beyond.  As you'd expect, each girl who joins the club has their own story and their own motivation when it comes to wielding their weapon in the kendo arena.

While Bamboo Blade as a whole sounds perfectly placed to spend the entire series building up to this big match between Muroe High School's female kendo club members and their opponents, we actually see the show take a very different approach which focuses far more on the major characters themselves over the actual kendo aspect of the story.  The big match in question comes and goes with only half an hour or so dedicated to it mid-way through this first collection of episodes - no long, drawn-out, blow-by-blow struggles here, which firmly plants Bamboo Blade's mandate as more of a high school slice of life story than a sports anime series.

This actually leaves us with a broadly entertaining blend of kendo training and matches set against the relationships between various characters as they shift, grow and develop, with Tamaki in particular given a fair amount of focus during the episodes spread across these two DVDs.  The secret to the first half of the series' success is that it never takes itself too seriously, happily lacing humour into everything that goes on even when those events have more serious undertones - a scripting decision that allows things to proceed with a sense of fun throughout while keeping a light-hearted tone aids what is ultimately a lovable set of characters (aside from the whiny and slightly irritating Eiji perhaps).

Although it won't win an award for any aspect of the series up to its half-way point, Bamboo Blade ultimately succeeds in everything that it sets out to do - it gives us a set of characters who are pleasing both visually and in terms of character and throws them into a fun story with some decent comic moments which is complemented rather than overrun by its kendo-themed setting, letting those elements fuse into a light-hearted but enjoyable viewing experience.  Throw in a competent English dub and you have yourself thirteen episodes of an amusing, fun and undemanding series to watch that has a great chance of winning you over if you're a fan of such simple yet effective slice of life-esque series.

English 5.1 and Japanese 2.0 audio with English subtitles.  The only other extras on show in these episode-packed discs are textless opening and ending credits.

7
Don't be fooled by its sports anime synopsis; Bamboo Blade is a slice of amusing, character-driven fun.
COMMENT AND DISCUSS
blog comments powered by Disqus