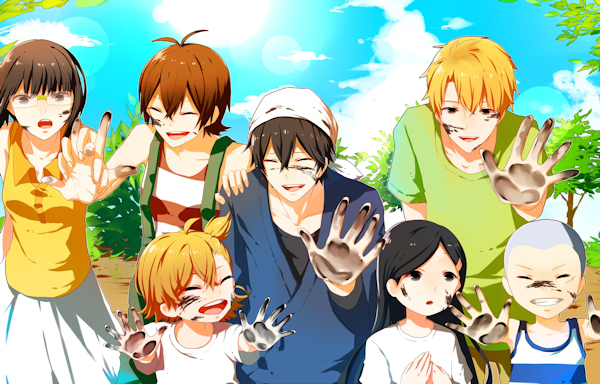 Just how much drama can be present in a comedy show before it becomes disruptive? Or what about the other way around? This is a question that is ever present in Barakamon, the new release from Funimation - via their distribution deal with Anime Limited. That's not necessarily an indictment on the quality of the series as much as it proves to make the series somewhat troubling to categorise within any particular genre. Nevertheless there's certainly some fun to be had with this bemusing series.

Based on the manga by Satsuki Yoshino, Barakamon follows Handa Seishu. A professional calligrapher who, after an unfortunate event, is exiled by his father to the Goto islands. Once there he doesn’t find the isolated and relaxing life he expected, and the revitalisation of his career has to take a backseat as he’s thrust into an almost anarchistic existence at the hands of the island’s array of barmy residents. Headed up by the seven year old Naru, the islanders inexorably begin to drag Handa into an array of situations he’s just not prepared to deal with. But perhaps they'll prove to be just what he needs to grow and find the spark his work has been missing...

Barakamon is a series of two halves: On one hand there's frequently hilarious, almost slapstick comedy where Handa is tortured by the islanders, plunged into water, covered in bugs and generally outwitted by Naru at every turn. On the other there's a touching, heartwarming drama as he warms to his new family and begins to find his path in both work and life. Even though by doing so it may lead him away from all that he’s beginning to care about. The problem is that, as excellent as both these elements are, they don't really gel together and tend to distract rather than complement each other.

Then again, the series is undeniably charming and the cast are a endearing bunch. The series manages to make everyone likeable, even the precocious youngster Naru. Voiced by a great cast including the likes of Daisuke Ono (Magi’s Sinbad), as Handa, the characters really spring to life no matter where the story takes them. Kinema Citrus have done a great job on the production and the series looks fantastic throughout. Thus, it seems a shame that the second season was given to a different studio. The soundtrack sets the mood well although my infantile inner child can't stop sniggering every time I see the opening theme is called 'Super Beaver’.

There’s a huge amount to like here which makes the series identity issues all the more frustrating. Had the series fully committed to either comedy or drama it would have been fantastic. However, when your laughs are cut short by a sudden sombre scene or a quiet introspective moment is interrupted by someone having a beetle thrown at them it takes you out of the moment. Still, if you can look past this there's a lot to love here, and with more to follow as the second season is probably on it’s way! If nothing else you’ll be able to tick off ‘calligrapher’ on your list of unlikely professions to have watched an anime about!

7
Two great shows that never quite blend together.
COMMENT AND DISCUSS
blog comments powered by Disqus