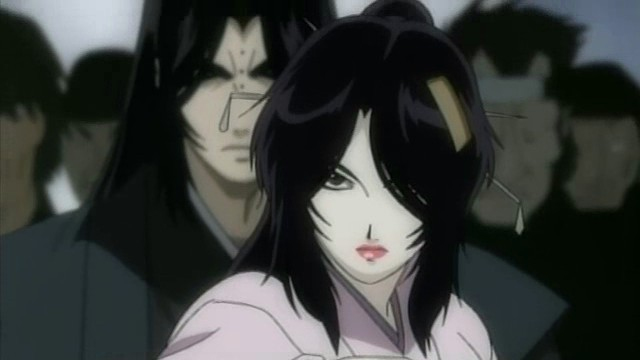 For an anime that has chosen to set its roots in a real-world historical context, there’s something very unnatural about the characters in Basilisk and it has nothing to do with their strange ninpou techniques either (well, almost nothing). It occurred to me somewhere during volume 2 that if Oboro; the sweet, caring, naïve heiress of the Iga clan is so sweet and caring, why the hell is everyone else in her clan so bloody evil? I struggle to imagine that any of these people once had parents! I know that being a fan of anime requires one to suspend a certain amount of disbelief, and I’m happy to do that, but sometimes you can’t help but wonder just...why?

Volume 2 continues with the Iga ninja trying to systematically bump off the members of Kouga Manjidani. Gennosuke is still a guest of Oboro at the Iga camp and has no knowledge of the competition set by the retired shogun and the Iga members are furiously trying to keep it that way. The ninja of Kouga Manjidani, suspicious of the Iga clan’s intentions and worried about Gennosuke, decide to send some people to find out what’s happened to him. This sees the introduction of a whole bunch of new characters, the names of who you’ll probably forget in two minutes; Kisaragi Saemon and his younger sister Okoi, Kasumi Gyoubu, Muroga Hyouma and Kagerou. It’s not a cast you’re going to remember in a hurry but I suppose that’s just as well considering most of them probably won’t be alive for very long anyway.

And herein lays the problem that Basilisk has yet to overcome... At its’ core Basilisk is about a group of ninja fighting to the death and that’s it! It works because the action is so rock solid, but the result of bathing the viewer in bloody action scenes means that there’s little room for us to get to know any of the characters - primarily because they’re all busy dying! It’s a shame because as it stands Basilisk has little hope of being anything more than a good action series. The simple plot isn’t enough to make it stand out as something special, and the lack of attachment to the characters means that its’ only ace in the hole is the fantastic visuals which it continues to lavish upon us in volume 2.

At this stage, I’m wondering how Basilisk is going to fair for the rest of the series. Are we going to be happy watching this seemingly predictable story play out for another sixteen episodes? Only you can really answer that.

I truly hope that I’ve missed something with this and that I’ll be proved wrong. Because for all the visual quality that it competently displays, it deserves to be more than just a good looking action series.

Now, can you remember the names of any of those characters?

6
Too light on the story and character development for some but it’ll probably satisfy the action junkie.
COMMENT AND DISCUSS
blog comments powered by Disqus