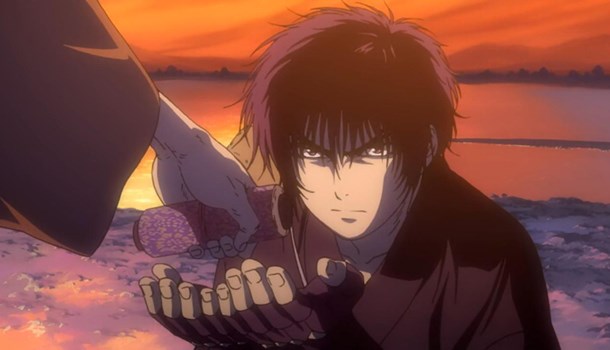 If you’ve been following this series so far, you’ll either be enjoying it for the mindless entertainment that it is or cursing the TV for all the missed opportunities. Whichever side you’re on, there’s no denying that Basilisk is entertaining on some level; the action is cool and the animation is smooth, but if you’re like me, you’ll be disappointed at the lack of layers this show has to offer.

Volumes 3 and 4 sees Gennosuke, now fully aware that the anti-war pact has been rescinded, setting off with his clan to confront the retired Shogun on his motives. Before leaving, Gennosuke lays down a challenge to the Iga to follow them and in doing so, has thrown down the gauntlet for both clans to come to a final, bloody confrontation before the victor is able to present Tokugawa Ieyasu with their completed scroll.

Gonzo are aiming this series at quite a predictable demographic of the anime community; one who a) likes action above all else and b) likes their female characters to have breasts the size of planets and engage in a bit of fan service on the side. This could be forgiven if the story was good and the characters were likable but these aspects are still lacking even after sixteen episodes. We do get to see some of the history behind some of the characters and what drives their hatred (and love) for each other, but it all feels a bit too contrived to really hold any water.
The end result just feels too much like “Oh, we better throw in some character flashbacks about now”. I don’t entirely blame Gonzo for this. Given the nature of the plot and its high body count, it was always going to be difficult to make this series with enduring, attachable characters. But I can’t help feeling that a better use of the characters screen-time and omitting the odd bit of superfluous fan service would probably have gone some way towards helping.

That’s not to say that none of the characters exhibit emotion; Tenzen, the series’ main villain, is a real hateful bastard and you’ll have no problem hoping that his comeuppance is nothing short of divine retribution. It’s just unfortunate that his character is so laughably clichéd. Koshirou on the other hand stands out as one of the more three dimensional characters in the series, which is quite a surprise given his first impressions from the first two volumes.

I think Gonzo might have taken Basilisk past the point of no return to stand any chance of elevating this to something more than mindless entertainment, sprinkled with fan service. If you’re already invested in this series then this review probably won’t put you off - volumes 3 and 4 are very much at the same level so you’ll know what to expect. For anyone still on the fence, Basilisk is fun to watch so long as you have set expectations accordingly.

I for one, however, am disappointed with the missed opportunity here.

Behind the scenes of Basilisk - Features some of the Japanese voice cast sitting round a table, talking about various aspects of the show to give the viewer a "deeper understanding of Basilisk".
Textless intro/ending songs.
Trailers.

7
Fun to watch but still lacking any kind of heart.
LATEST REVIEWS