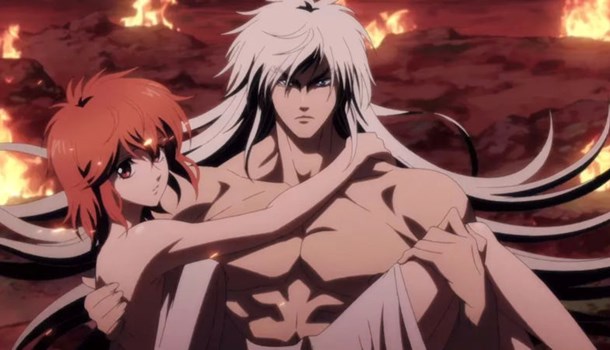 I wasn't sure what to expect with Bastard. A modern take on Kazushi Hagiwara's very 80's fantasy about a resurrected wizard named Dark Schneider, who has to save the land of Meta-Licana (none too subtle) from a group of generals cutting a bloody swathe through the kingdom with an eye on total dominance.

Schneider used to be the head of these bad-asses, but was defeated and sealed away in a young boy named Lucien, and can only be converted to his fully powered form with a kiss from a virgin, who in this case is his older-sister stand in Yoko. In my First Thoughts article over on Anime Independent, I explained how visceral anime isn't usually my scene - certainly Goblin Slayer is too much for me, and I can just about handle Berserk because the underlying drama is so intense. So imagine my surprise when Bastard turns out to be more of a harem comedy than a savage and gore-infested assault on the senses. It's certainly not "Heavy Metal, Dark Fantasy" in the way I'd imagined it. And despite my initial positive thoughts, the series descends pretty quickly into lay-of-the-week territory.

In fact Schneider himself, despite being a feared destroyer of worlds, acts more like a randy teenager who defeats all of his big-haired and buxom female villains by bedding them. It's so magnificently unashamed and puerile that I thought the internet might actually explode with rage, and instead you get glowing reviews from the likes of Kotaku - yes, feminist ally Kotaku - extolling how they "loved every second of it". I don't know about you, but I'm losing track of what we're supposed to be outraged by these days, which is why I gave up trying. It was fun to read the comments of that review though, it's certainly divisive! 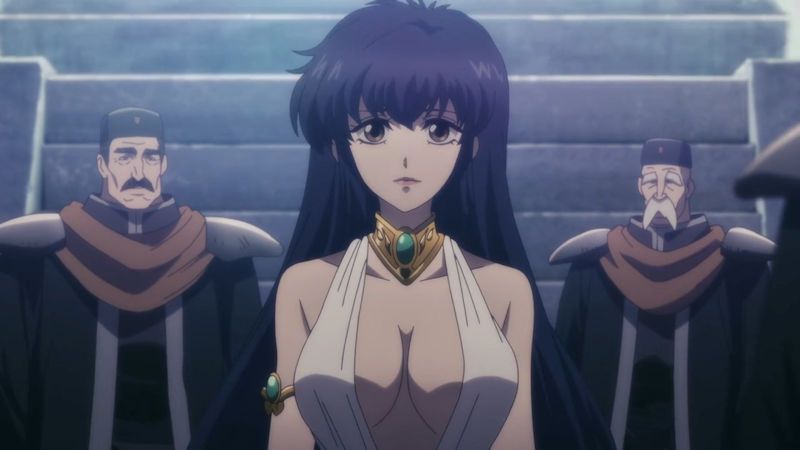 Less a character, more an objective.

Taken on its own merits, the show is beautifully produced, with exquisite backgrounds and sharp character designs which fully embrace their 80's hair-metal roots. Direction comes from Takaharu Ozaki (Beck, Goblin Slayer) and the soundtrack is handled by Yōsuke Kuroda, who weaves a good tune but doesn't land anything even close to his magnificent work on Trigun.

The English dub is either purposefully over-the-top and stilted, or it's crap. Or both, I can't decide. But if you want even a chance at taking this seriously, then pick the Japanese dub, because at least in that version the bad guys sound threatening and not comedic.

There's absolutely nothing subtle about Bastard - from the gratuitous sexual shots to lines such as "Grow up to be good women or I'll be back!", it's so patently absurd that you either embrace it wholeheartedly or shun it entirely, I really don't think there's much middle-ground here. There's no wrong answer of course, it's very specifically made for one audience, it's down to you to work out which demo you fall into.

I was put in mind of another "throwback" of sorts, HBO's Peacemaker series starring John Cena. Where that show latches on to the ridiculous nature of its protagonist and provides gore, comedy and even pathos, Bastard fails to really engage its audience. Schneider isn't particularly dark, he's not fighting any urges to murder people, there's no real growth in his character and nothing legitimately challenges him, it's like fantasy anime on easy mode. As such, it's just not very interesting as a story and he isn't engaging as a character.

So for me, it wasn't the insanely violent blood-fest I was expecting - it's actually very tame, and the fact that Schneider makes no attempt to undo the wrongs of the "evil" generals he's facing (such as turning a townful of people to stone) takes away any edge or idea that drama or stakes exist at all. It's a bit of a failure in terms of both promise and execution, as it devolves into such an "also-ran" in the fantasy genre that it fails to provide anything unique or interesting to latch onto, unless you just want to see beefcake making virgins moan. In which case, bingo.

Were I still a teenager I think I'd enjoy this more, and I'm certainly not the target market. I'm a 43 year-old father of a 3 year old daughter, so watching some horn-dog work his way through virgins isn't my cup of tea. I don't mean to sound puritanical here, I'm happy with some sex and sex-appeal providing it serves a purpose. I'd hoped for something in line with Berserk, featuring a very heavy-metal soundtrack (which is absent), instead we're treated to anime that trades on heavy metal references, cheesecake and beautiful animation. If that sounds like your Nirvana, then this is for you. For anyone looking for a bit more depth to their anime, avoid like the plague.

The second part of Bastard!! will premiere in September.

5
A curious throwback that doesn't do enough to embrace its own premise, a shallow watch with little beyond cheesecake to recommend it.