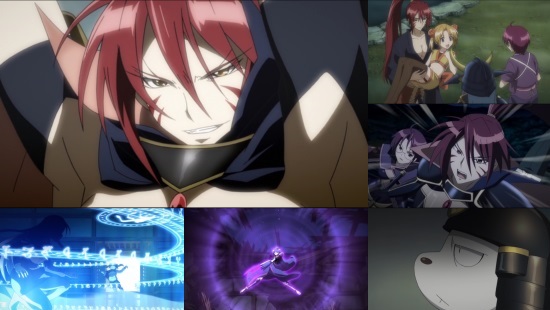 Anime finds inspiration from various sources, yet there seems to be a tradition of making series based on the Sengoku era and, in particular, Oda Nobunaga. Various anime take this premise and put a unique spin on it to differentiate it from the others, and Battle Girls: Time Paradox throws in time travel and a parallel world where every single person is female in order to make it stand out. The series focuses on Hide Yoshino, who is conveniently nicknamed 'Hideyoshi', a girl from modern-day Japan who finds herself thrown into a parallel world in the past due to a chance encounter at a shrine. Within this world, she encounters Akechi Mitsuhide and Oda Nobunaga at a burning village, and from here on Nobunaga becomes quite smitten with Hideyoshi and her odd out of place mannerisms before she enlists Hideyoshi's help in her current objective of claiming all the pieces of a mythical set of armour that will allow her to conquer all of Japan. Without fully understanding what is being asked of her, Hideyoshi immediately accepts the offer to help, at least until she can find her way home.

From the outset Battle Girls: Time Paradox feels like a show that doesn't really know what to do with its Sengoku era premise and story of Oda Nobunaga. At first the series is rather self-mocking by calling attention to some of its odder aspects, such as every character in the world being women. What makes it more bizarre is that a talking dog appears out of nowhere and does nothing more than engage in comedic conversations with Hideyoshi and spy on the cast while they are bathing. For the most part the series present each of the situations in the show in a comical manner with really out of place scenarios taking place - one episode features the characters engaging in beach games such as volleyball and sumo wrestling, while another has them telling ghost stories to escape a forest. From this,  you can look at the series as a parody of the whole Sengoku era, yet it doesn't push it far enough with its comedy - at times it just feels like a series of random events to get to the main historical event that's associated with Oda Nobunaga.

From this point onwards, the whole series suddenly starts to take itself seriously, with more action, drama and time taken to explain the whole plot of the series. The problem is that this all happens within the last three episodes of the show - up to this point the series flits between its comedy and really odd situations in which Hideyoshi and company attempt to retrieve the armour needed for conquest. Without the characters being named as they are and the historical Japanese setting it doesn't really feel like it makes proper use of its placement or the historical significance of events. The most puzzling aspect is that Hideyoshi comes from the future and even has her phone and a Japanese history textbook, which she reads only twice during the whole show, meaning that she doesn't even attempt to learn anything or use any tools or resources from the future to help. Instead Hideyoshi just plays around and wonders why certain characters are acting the way they are.

Indeed, this is a big detractor from the show - Hideyoshi is a rather annoying protagonist who complains about how basic the past is, and will throw out a modern day term or reference resulting in her apologising to the other cast members who are confused and don't understand what she is talking about. That said, the rest of the cast are very forgettable as well, using only a limited sample from the very large set of notable characters available to them from that period of history. All of the characters are rather flat and one-dimensional, focusing only on their various rivalries and fighting. Normally this would be enough in an anime about war and conquest but it doesn't really work all that well in a comedic context. The characters just feel like they're there in order to bolster the numbers at the best of times. Then again, the smattering of action scenes and comedy within the show is entertaining enough for the most part - the main problem is that once a scene has passed it is instantly forgotten about.

This all combines to make Battle Girls: Time Paradox a very run-of-the-mill show where nothing noteworthy happens to make it stand out or memorable in any way. However, it manages to handle its comedy and action decently enough in order to at least make the show watchable. The same can also be said for the show's audio, with performances that feel very "phoned in" but passable from the show's voice cast in both the English and Japanese language tracks. The Japanese version manages to be just slightly better due to the English dubs handling of idioms and character names at times, while Hideyoshi is more vocal and screams louder in English, which becomes rather grating.

Overall Battle Girls: Time Paradox may not be terrible but there's nothing really noteworthy or memorable about it, making it a rather average series that is hard to recommend to people. The best that can be said about it is that it's an easy watch that requires no real thought or even that much of an attention span to enjoy - a show that, if someone has some time to kill and wants something Sengoku era themed, can be enjoyed as a curiosity piece to see what lengths animation studios go to to shoehorn Oda Nobunaga into a story.

5
An average and forgettable series that doesn't do anything unique enough with its setting to make it stand out from the competition.
COMMENT AND DISCUSS
blog comments powered by Disqus