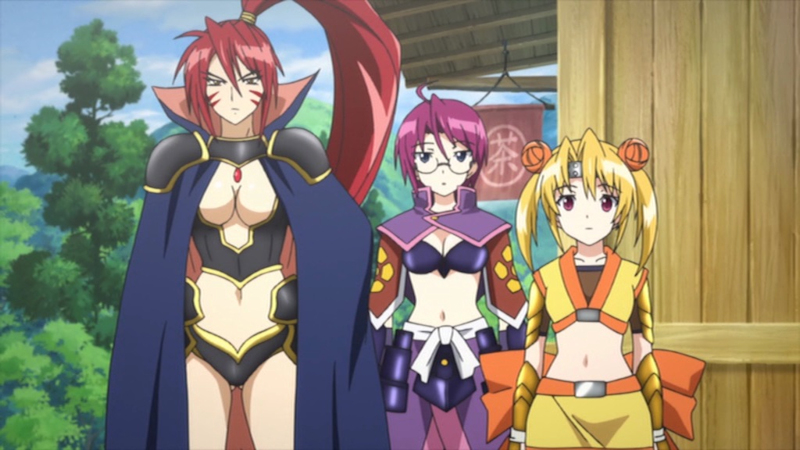 A few months back, UK Anime reviewed a very over-the-top historical action series called Sengoku Basara, based around the Warring States (Sengoku) period of Japan’s history. In this period of history, Japan was in upheaval as rivalling war lords strove to out-do each other and conquer the islands of Japan. Sengoku Basara was a tribute to this period using super powers, over-the-top fight scenes and truly spectacular visual effects.

Battle Girls is, to all intents and purposes, Sengoku Basara with tits.

This statement covers the first half of the title. The second half is unfortunately much more cliché and disappointing. Hideyoshino Toyotomi is an airhead and is the modern day middle school version of Mihoshi from Tenchi Muyo. She is blonde, stereotypically self-centred and stupid and for some reason or other, after making a rather misplaced wish at a local shrine, she is pushed back half a century in time into the Sengoku period with nothing more than her mobile phone, her gym shorts and the contents of her small hand bag.

Hideyoshi appears in a field, at night, in an area and time with no mobile phone signal. She is lost, confused (nothing new there) and nearby villagers and children are being slaughtered and set ablaze. As Hideyoshi approaches the noise it becomes evident that there is an intense battle raging inside of the flames and as the dust settles and the fires swirl and rage out comes a scantily clad goddess with a bust that can only be expressed in octaves, who introduces herself as Oda Nobunaga. From there onwards, the rest is history... or is it?

Now, I don’t profess to be any expert of Japanese history but just looking at some of the notable names from the Sengoku period’s Wikipedia page, it becomes rather obvious what the creators of Battle Girls are trying to do here, and frankly, I applaud them. In the first few episodes Hideyoshi is rapidly propelled from being an object of odd curiosity to being one of Oda Nobunaga’s right hand women as she performs minor compassionate miracles through the use of modern mobile phone technology and martial arts learnt through watching prime-time anime series.

History, as seen in Battle Girls, is not all it is cracked up to be. History, instead of being led by men, is led by women. Those functions formerly filled by men, are filled by women. And where are the men? Well, they don’t exist. Or if they do, they exist in dog form, which leads to the mystery of not only how to people procreate (it isn’t bloody storks!), but actually how does the species survive at all? And another thing, how does Hideyoshi have a mobile phone that never needs charging when it is constantly seeking a mobile network? I want one!

However, rampant plot holes aside, I foresee Battle Girls as being on my “guilty pleasures” list this season as it is actually not as bad as I was expecting and, notwithstanding the huge quantities of yuri fan service which are bound to appear from an entirely female work, I kind of want to see how it ends. At the very least, it’s deserved my attention for a few more weeks, though it may not be everyones cup of tea.