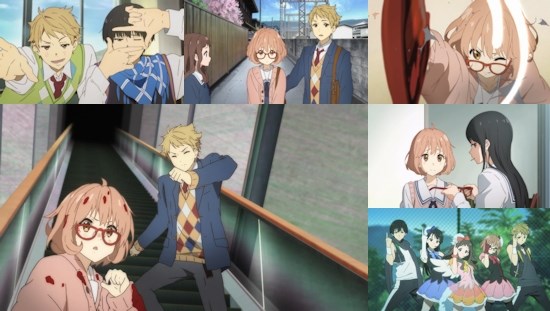 As much as I love K-ON and its heavy slice of life leanings, I've frequently found myself wishing that Kyoto Animation would do something more with their obvious talents - while admittedly that desire for more tended to translate into "more Full Metal Panic", in a broader sense I wanted them to dig their teeth into something a little more action-packed than the likes of Tamako Market. This desire was only heightened by the studio's work on Chuunibyou, where its brief lashings of tongue-in-cheek action were arguably the best bits of the series by far, and the show's short Depth of Field OVA series served only to reinforce that.

This brings us to Kyoto Animation's offering for the autumn, Beyond the Boundary (or Kyokai no Kanata if you prefer the Japanese title), which promises to be high octane and packed to the rafters with action. Well, relative to K-ON, at least. Much like Chuunibyou before, this series is based upon light novels published by the studio themselves having won an award in said studio's own annual competition to find exciting new works.

The series certainly knows how to kick things off in eye-catching fashion, as our protagonist Akihito Kanbara races to his school rooftop to save a girl who looks like she's about to leap to her doom... only for her to stab him straight through the chest with a sword seemingly pulled out of nowhere, which must surely be the definition of a bad day at school.

Luckily for Akihito, he's effectively immortal, for he is the offspring of a human and a supernatural being known as a "youmu". For her part, his assailant Mirai Kuriyama is a Spirit World Warrior, the latest in a long line of descendent with supernatural powers of their own tasked with ridding the world of youmu. While stabbing someone for no particular reason would normally give way to regret and apologies, Mirai seems to see things a little differently - now she's found an immortal half-youmu target it's obvious that he is the perfect fodder for her to practice using her abilities, even if Akihito is none too keen on being "killed" on a regular basis, even if Mirai provides plenty of fuel for his glasses fetish in the process.

Rather than endure countless deaths at her hands, Akihito instead offers to help Mirai hone her currently lacking skills so that she can learn to get on in the world as a Spirit World Warrior, and despite his own origins it seems that he's perfectly placed to teach Mirai everything that she needs to know as a fledgling youmu-hunter. Not that Mirai wants anything to do with this - as the loner and sole survivor of a clan that was detested on account of its inherited power (that being the ability of members to control and manipulate their own blood), she really doesn't have time for others and certainly doesn't feel inclined to entrust her future prosperity and career to anyone else. Of course, circumstances contrive to force Mirai's hand, bringing her closer to Akihito and his circle of friends and proving that being around others isn't such a bad thing for Mirai after all.

Although it has some nice ideas, Beyond the Boundary is largely a pretty dyed in the wool supernatural story consisting of strange creatures, strange creatures in not-so-strange (i.e. human) bodies, and humans with special powers. There's nothing within the series that really allows it stand out in terms of its narrative, and all of the big reveals the series thus far sports feel like things you've seen done - and done better - elsewhere. It's certainly enjoyable to see the Spirit World Warriors making a career of their abilities, and "cashing in" their victories for real-world money, but this is mostly just played for laughs relating to Mirai's dire financial situation and little more.

The worst criticism that can be levelled at the series is its horrifically clumsy attempts at pandering to anime fandom - Akihito ensures that he mentions his glasses fetishes multiple times an episode (shot down by the same catchphrase/quip from Mirai each time, of course), while another character's obsession with his younger sister is brought up time and again for no reason other than to tick that particular check box in the otaku database. Mirai herself is arguably even worse in these terms, shifting from clumsy and dim to highly-skilled and smart as the plot demands of her in ways that simply shatter any kind of sense of reality around her as a character. As a whole, the series skirts as close as Kyoto Animation have ever dared towards overt fan service - there's no panty shots or outright nudity here, but plenty of suggestive moments designed to fuel the viewer's fantasy, which would be far less of a problem if it didn't frequently get in the way of the show's attempts at telling a story.

On a more positive note, Beyond the Boundary does look gorgeous, filled with colour and detail and with the kind of expressive and attractive character designs you've come to expect of the studio. Whether the cutesy stylings of the characters fit in with the show's world is perhaps a more arguable one, but on a personal note I think they work just fine, and when the show does put its mind to a little youmu-fighting it looks suitably impressive even if I wish there were a little more of it on offer. Throw in some razor-sharp comic timing (some of which plays smartly against that prior sense of pandering, in fairness), including an episode simply played for laughs, and moments of nicely written dialogue to even out some of the more torturous aspects of the series, and this is a show that can entertain when it puts its mind to it, if only fleetingly.

Maybe the second half of this series will turn Beyond the Boundary on its head, but at this point in time the show feels destined to be the latest in a string of disappointing series from Kyoto Animation - it isn't aggressively bad, and actually shines through in terms of its entertainment value from time to time, but it seems too preoccupied with giving the viewers what they want on a high level and as a result forgets all about telling a strong story or developing its cast of characters in an interesting way. Perhaps this is a lesson that we should be careful what we wish for sometimes?

6
It looks great and can entertain at times, but spends so much time pandering to segments of its audience that it frequently loses its way.
LATEST REVIEWS