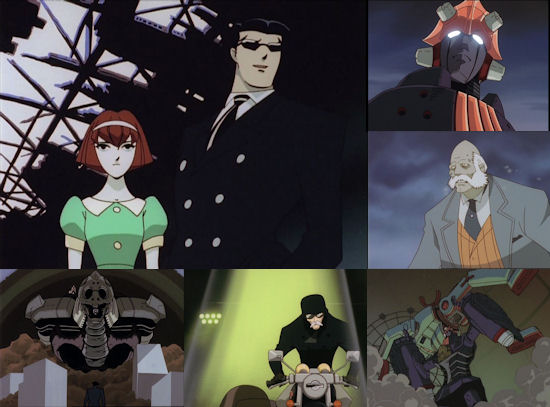 The Big O is a bit of a blast from my personal anime past. It first aired in the UK when the Cartoon Network was trying to diversify its programming and had a lovely after-school anime slot (at least, I think it was during this time.) It was, frankly, the first time I had seen a giant robot series, and at the time I couldn’t really appreciate it and I personally preferred the likes of Tenchi Muyo and Sailor Moon which were also on at the time in competing or adjacent time slots. Quite a few years have passed since then however, and I am delighted to give the series a second viewing to reappraise my opinions, especially given its creator Hajime Yatate's past outings; Mobile Suit Gundam series, Cowboy Bebop and Escaflowne, just to name a few.

The Big O is another series in a long line of dystopian giant robot anime, this time set 40 years after an unknown occurrence which caused everyone to lose their memories prior to the event, which devastated the environment and the world. Paradigm City is the last enclave of civilization, populated by people without any recollection of who they were or what happened to the world, living in a city which is haunted by relics of the past. Think Gotham City, but slightly more twisted. (Actually, i think it's trying to be New York City, primarily due to geographical references such as the River Hudson and the names of the islands).

Roger Smith, the progenitor of the series known as The Negotiator, is the man who individuals turn to to solve disagreements and mediate hostile situations. If something giant and hostile threatens the city, well, Roger just clicks his magical do-everything James Bond style watch, and out from his secret underground railway comes his own personal relic of past technology, the giant ass-kicking robot, Big O. With the power of his suave negotiating skills, his giant robot, his cool, cold hearted assistant android Dorothy and his Alfred-like butler Nelson, there is frankly nothing that Roger cannot deal with, except himself.

Each episode sees Roger, Dorothy and Nelson confronting the gigantic relics of the past technologies which threaten the livelihoods of the people struggling within the last city on Earth. These confrontations usually taking place within one of the massive geodetic domes covering the city where maximum collateral damage can be caused, with great dramatic effect. Yes the Big O, to all intents and purposes, is merely an excuse to see giant robots battle in a city in true Japanese monster movie style.

The Big O has a delightful film noir feel to it with all the ingredients of classic western detective shows as well as early giant mecha and monster series. Take Batman for example - Roger is a perfect fit for a younger Bruce Wayne. His butler Nelson has a familial connection to Alfred with regard to their personality and their technical ability. Major Dastun, the military police commander, is a perfect likeness of Commissioner Gordon. Dorothy oddly enough reminds me of Astroboy, except she has the memories of the child she was built to replace and she looks great in a dress.

So, without spoiling anything or giving even the smallest indication of the story, it’s time to move swiftly on.

This first series (episodes 1 to 13) is episodic in nature, with a bit of a “giant robot/monster of the week” feeling to it with each episode revealing a little more of the history of Paradigm City and the overall sub-plot, leading up to a revelation of the mystery behind the end of the world and the great amnesia attack of fourty years previous. This is all well and good, and frankly fits in perfectly with the “endless repeats” of the television channels which the series was destined to end up on.

The music is camp and reminiscent of Flash Gordon (Seriously, listen to the Opening Theme tune, and try not to sing “Flash! Aaaaaaah!”) and the English voice acting is actually rather good. The Japanese voice acting, however, is dire. Stick with the dub on this one chaps. The art is, frankly, aged with the animation style similarly to the Batman animated series of the mid 90s, but with a hell of a lot more background detail and “oomph”. It is by no means bad (it's certainly adequate), but it unfortunately shows the level of budget which the series was produced on and with this series being a collaboration/commission between Western licensees and Japanese studios, this level of quality is unfortunately not unexpected. But it’ll do.

All in all, after spending the last 6 hours living through The Big O, my verdict is that this series deserves the title of "Anime Legend". First of all, the characters are well written and emotional. Secondly, the series is accessible to those who have not previously seen anything similar to this genre and lastly, it's frankly good fun and well worth an impulse purchase.

On a final note, I will add that three years after the release of The Big O, the second series, containing episodes 14 to 26 was commissioned following a strong fan following and to my knowledge this has never actually been seen in the UK. Considering it will show the conclusion to the cliff hanger in episode 13, and finally detail what happened fourty years hence, I for one hope that this is picked up by our friends at Beez Entertainment for a release over here.

English and Japanese audio with English subtitles.  Extras are made up of the usual textless opening and ending credits, and some Beez trailers.

7
It’s not Evangelion or Cowboy Bebop, but it isn't half bad.
COMMENT AND DISCUSS
blog comments powered by Disqus