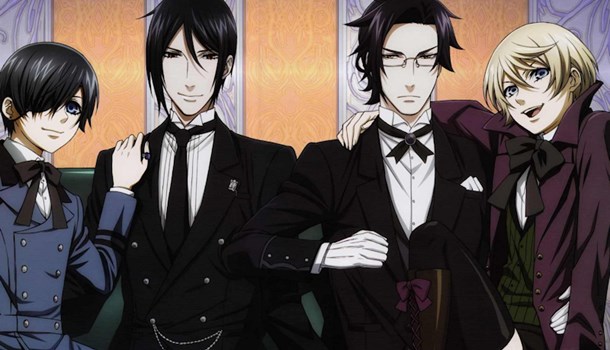 The unlikely sequel to Black Butler, which centres around young Lord Ciel Phantomhive and his eminently capable butler, Sebastian Michaelis, returns thanks to Manga Entertainment. Having seen the origin of this pairing and the completion of their demonic contract in the last series, where is there to go for the Queen's guard dog and his manservant?

I have to give the producers some credit for a fiendishly misleading opening. Initially we're treated to an opening credits sequence featuring a new young Lord, Alois Trancy, and his butler Claude Faustus (a pretty blunt reference). Like Ciel, Alois is cold and distant, but unlike his predecessor, he's also cruel and spiteful. I had to admit that if this was the new pairing, I wasn't going to sit through the whole thing. With a lead you really couldn't care for and a Sebastian clone, it seems like a pale imitation of the real thing.  Thankfully, a knock at the door reveals a mysterious stranger who has one hell of a plan...

Indeed, it's not long before everyone returns, though Ciel suffers from memory loss and Sebastian is very much following his own agenda. Having failed to devour Ciel's soul once, our favourite butler is very much determined to have his way this time around.

At only twelve episodes, there's a brisker pace to proceedings this time around - almost all of the episodes involve Ciel and Alois as they become locked in a rivalry that neither of them may survive. This provides a nice focus and lots of character development as we learn just why Ciel's soul is so highly prized, as well as more details on demons and their role in society. Ther are some solid twists, and a few moments that should make anyone squirm. The way Alois treats his maid in particular is downright malicious.

On top of the main attraction, there's a third disc containing the six OAV's that accompany the series proper. These range from the daft (Ciel in Wonderland) to the character building (The tale of Will the Shinigami) and on to the creepy (Spiders Intention). The inclusion of all these extras makes the three-disc set feel meaty and satisfying. Kudos to Manga Entertainment for including them and not milking an extra release out of the show.

Black Butler remains a good looking series. It's standard TV fare for the most part, but the transfer is clean and crisp. The dub is by turns excellent and appalling, but thanks to the Phantomhive servants being relegated to background roles in this series, it's actually worth persevering with if only for J. Michael Tatum in his role as Sebastian, which he absolutely nails.

Fans of Black Butler are in for a treat - not only has the show managed to bring back the entire cast in a believable fashion, but they've crafted yet another superb ending to boot. Personally, we're still holding out hope for a third season to ensure that, much like Sebastian himself, we have a pact that's set to endure.

And why not? After all, he's simply one hell of a butler.

English and Japanese audio with English subtitles.  Extras include commentary on the opening and closing episodes, and some trailers.

9
A stylish Gothic horror with plenty of content to seek your fangs into.