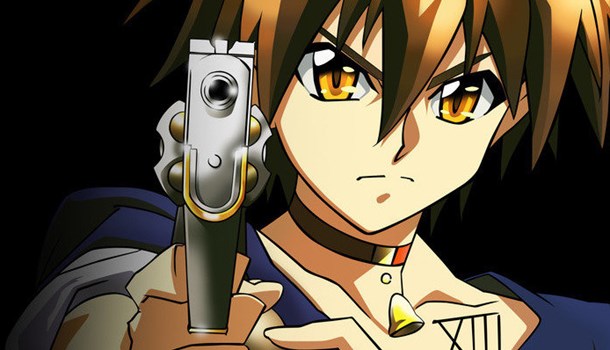 The Black Cat world is a futuristic place, where Sweepers are emplyed to help bolster the police force. Essentially bounty hunters, Sweepers take on the toughest casefiles, but one figure is legend: Black Cat.

It’s well known that Black Cat works for an organisation with its own agenda, and the cases he takes are not concerned with law and order - he simply kills those deemed a threat by his employers.

Enter Sven Vollfield, a down-on-his-luck Sweeper, ladies man and all-round nice guy. His shaggy appearance and almost comedic manner hide his tremendous fighting ability, plus his special talent (you’ll have to watch the DVD to find out what that is!) Sven is caught up in Black Cat’s world when a young girl comes to him for help retrieving her kidnapped sister. But all is not as it seems, and with a walking bio-weapon, a mysterious kimono-clad female sweeper called Saya and the professional thief Rinslet Walker all involved, the action is explosive and deadly!

Black Cat certainly hits the ground running, with some fantastic set pieces, solid character designs and cool music, but after a few episodes it’s a little hard to discern what the series is aiming for. It’s a mixture of gritty-noir and cute slapstick, and although initially a little unsettling, the narrative keeps you hooked while chaos reigns onscreen.

This "see-saw" approach runs through the entire series, and as such it's typical Shonen Jump fare - angsty, cute, fun, full of unique characters and ticking all the stereotype boxes. If you can put up with the almost casual violence and the silly moments, it's a positive experience overall.

The dub is pretty good too, and whilst it won’t sway subtitle purists, those of us who enjoy watching rather than reading have nothing to complain about. And speaking of watching, the direction is also very solid - memorable fight scenes, great use of gadgets and some downtime for getting to know the cast are all handled well, giving us time to breathe between the hail of bullets flying around.

The ending is the only real let-down, but not for the reasons you'd expect. It certainly goes out with a bang, and ties together loose plot threads with some dexterity, but the internal logic is fuzzy where it really shouldn't be (traces of Trigun's ending here) and the overblown and ridiculous threat at the endgame is just slightly too fantastical to be taken seriously.

So should you invest in Black Cat? Absoloutely, if you crave daft Naruto-style adventures, with a little teenage angst thrown in for good measure. It's always a pleasure to watch, but you'll likely move on without looking back when it ends.