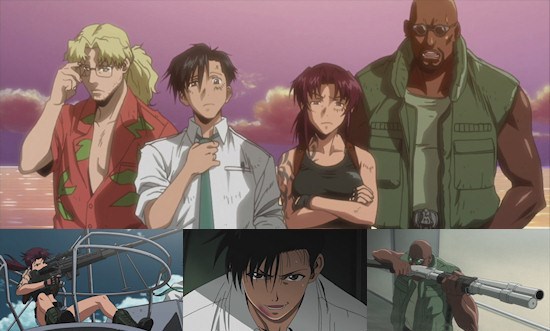 She wears very tight, short denim shorts. A nice (again, tight) t-shirt and carries a pair of holsters. She is called Two-hands by her enemies, Revy by her colleagues and is a firework at heart. She is the kind of woman you want to throw down hard on a bed and teach her a firm lesson. God I am wearing one heck of a smile right now. (I'm really starting to worry about you - Ed)

Black Lagoon starts simply enough. Single young Japanese businessman Okajima Rokuro is the bitch of his boss. Given what seems like a simple assignment, he is ordered to transport a disc, which clearly has some worth as he finds himself taken hostage en-route by a band of mercenaries, known as Lagoon Company. During his captivity he undergoes a transformation as he realises that he is a witless tool of the company and his own life is completely meaningless. He gets closer to his captives (Stockholm syndrome) and the ferocious hit- woman of the Lagoon crew, Revy, begins to take an interest in him... as much as he tries to avoid it! As he continues to integrate himself with the Lagoon crew he becomes “Rock”, the suit-wearing, quick-thinking hardass of the South China Seas.

The quality of the show is most impressive. Madhouse have employed both traditional and CGI techniques, blended together to form almost seamless action scenes and environments, while at the same time preserving the gritty atmosphere of the show. The opening and ending music, as well as the rest of the soundtrack, are excellently produced and contribute nicely to the atmosphere. The English dub is also well delivered by the vocal cast, but the audio quality is a bit suspect due to poor post production, the acting of the English voice actors is top notch and properly convey the hardass emotions of the characters. Dutch especially is very well done indeed. You can definitely tell they got a big black Mr T like chap to do his voice! (Ok, so Dean Redman isn’t big, but he is definitely black!)

It’s pretty obvious judging from the above comments that I like Black Lagoon. I do. I like it a lot. This is perhaps the most, unique series I've seen to date in terms of the character interaction. I’ll take a chance now and state that I bet that Revy loves Rock. It’s going to be a while until I find out if I am right or not, but I can so see those two shacking up. She does have a very odd way of showing affection though. Not entirely convinced that emptying two clips in his direction is a way to get the fires burning. Rock thankfully goes against the standard cowardly anime male stereotype and shows both backbone and emotion (except when it comes to Revy).

I’ll do you a simple favour. Buy this. If you enjoy action, you’ll love Black Lagoon. Enough said really.

9
A quality product, does what it says on the tin!