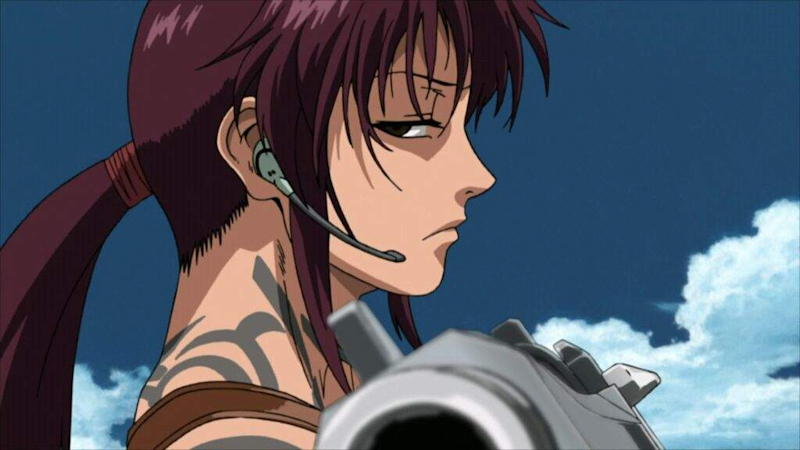 I do wonder if there really are women like Revy and Roberta (the odd soldier/housemaid girl from volume 2). These women are so scarily hard that they don’t just make my dangly bits retreat, they actually make them invert due to the sheer level of emasculation.  These women are scary...

So now that I have finally emerged from my hiding place I can explain what has my John Thomas so worried. At the end of the last volume we left the Lagoon company with the young master Garcia, holding him for the mafia for ransom against his Venezuelan family. The family sent The Bloodhound, a Colombian mercenary who was the family maid, to recover him. To say she is one hard nut is an understatement. She is so focussed on her task that she literally crashes a Mercedes from atop a 5 story building in order to stop the Lagoon company’s escape. RPGs and miniguns are the weapons of her trade. If women like this really did exist in the world, I doubt there would be many warlords left. Of course, Revy, being the uncontrollable wall of violence and anger she sometimes is, is no walkover either and is more than just keen to exact revenge on this cosplaying soldier.

This is where my bits begin to recover.

The second half of the volume and the finalising episodes of this series show us that the Lagoon Company doesn’t actually care who they help as they do a delivery run for the Triads, delivering key documents to the CIA to prevent terrorist attacks. Revy shows us just how good she is during this mission while Rock acts as his name suggests, preventing war with his cool diplomatic tones.

My enthusiasm for this series is pretty much as high as it gets at this point. I find the sheer quality of the direction, the scripts, the dialogue and the action (heck, even the damn dub) to be almost overwhelming and if I have not said this enough, Black Lagoon is for sure up there in my top 10. I normally have some negatives to impart at this point, but frankly this volume came at the right time for me delivering everything I needed to turn my frown upside down.

I did mention above that this is the end of the series, but only 12 episodes? Never fear, Dirty Uncle Seb will explain and reassure you! Black Lagoon is split into two 12 episode series, the second being called Black Lagoon: Second Barrage which will be released soon. The second series follows a slightly different line to the first with the Russian Mafia “Hotel Moscow” taking a key role in events Revy shows us more of what makes her so unique. (She is not as much of a gutter rat as you expect don’t ya know!) Having seen what’s to come, all I can say is that you should prepare for the long haul and just give in. If you have kept up this far, you might as well keep up to the end!

9
Damn does Revy look good in those shorts...
COMMENT AND DISCUSS
blog comments powered by Disqus